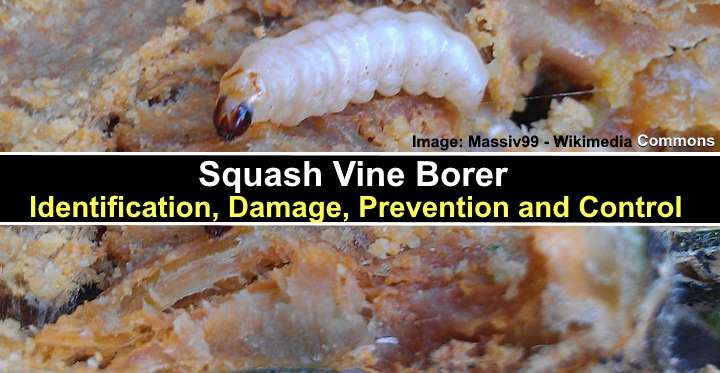 The squash vine destroyer is a white larva that tunnels through squash, pumpkin, and gourd plants from the inside, destroying the plant stems. Wilting leaves on a Cucurbita plant are the first indication of squash vine borer damage.

Unfortunately, it’s typically too late to rescue the diseased squash plant once the damage has been visible. The best strategy to avoid and manage squash plant damage is to prevent adult squash borers from laying eggs. 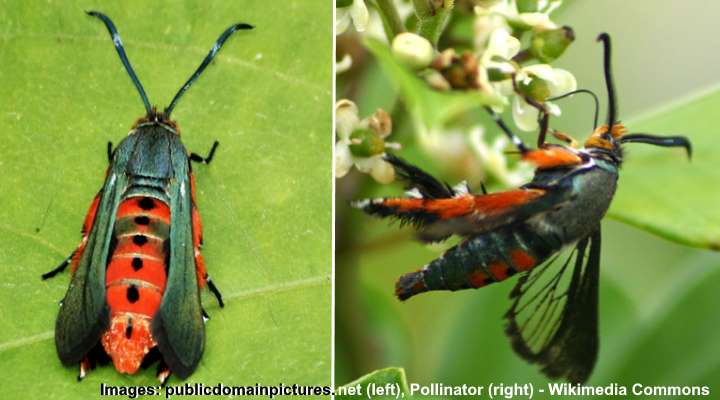 The best way to control squash vine borer larvae is to prevent them from attacking. Effective natural control methods for squash vine borers include the removal of all squash plant debris at the end of the season and crop rotation strategies. Row covers, egg removal, and planting borer-resistant squash plants can all help to protect against grub damage. 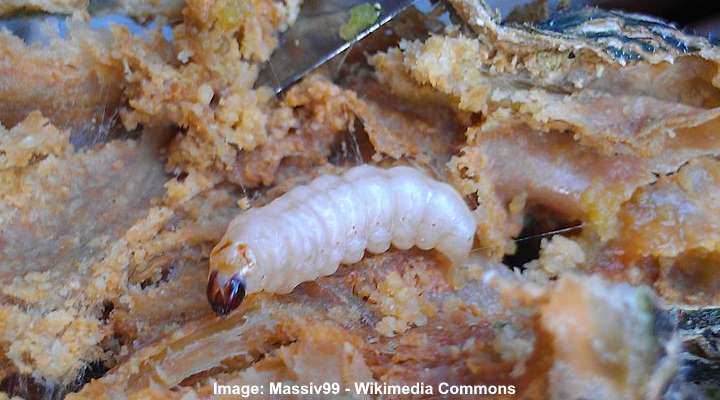 Wrinkled worms with brown or black heads that look like fat creamy-white larvae are known as squash vine borers. The pale caterpillars are difficult to see because they spend their entire lives burrowing through squash vines. The fat white larvae grow to be 1″ (2.5 cm) in length. After burrowing into the soil, they overwinter as brown pupae.

An egg is laid at the base of a squash plant by a squash vine borer, which is the larval form. The little larva bores into the squash plant stem after the egg hatches after seven to ten days. The white grub consumes the stem for four to six weeks, stealing water and nutrients from the plant.

The squash borer larva burrows into the earth to pupate after developing into a fat wrinkled grub. The adult squash vine borer, a brightly colored fuzzy moth, emerges from the brown pupa in the ground the following summer. After emerging from the pupae, female squash vine borer moths begin laying eggs. Throughout her lifetime, a female may produce up to 200 eggs. It takes four to six weeks from hatching to larvae pupation. Female moths survive for five days after emerging from pupae, while males survive for three.

The larvae, which are roughly 0.08 inch (2 mm) long when they hatch, emerge. The tiny caterpillars begin to do severe damage to the squash plant vine after burrowing into it. Grubs that are 1 inch (2.5 cm) long eat plant tissue until they become creamy white. For four to six weeks, the hungry larvae feed constantly. You may cut open the stem of a squash plant to remove the black-headed white grubs inside if you suspect damage.

A somewhat hairy orange moth with iridescent greenish-black wings, the adult squash vine borer is a bit bigger. With a wingspan of 1 to 1.5 inches (2.5 to 4 cm), the green and orange moths grow up to 1 inch (2.5 cm) long. The orange bodies of squash vine borer moths feature a line of black dots down the middle.

Where Do Squash Vine Borers Come From?

When female moths emerge from the ground and lay eggs at the base of squash plants, squash vine borers emerge. The larvae will eat through the inside of squash plant vines for up to six weeks before they are discovered. The bloated larvae bury themselves in the earth after leaving the ruined plant.

The squash vine borer is a pest that affects squash, pumpkin, and zucchini plants in North America. From Florida through southeastern Canada and west to Texas and North Dakota, moth and grub populations may be found.

Where Do Squash Vine Borers Live?

What Do Squash Vine Borers Eat?

Squash vine borers bore into the vines of squash plants, as the name suggests. The grubs feed on the soft tissue inside squash plant stems throughout their larval stage. The squash leaves wilt, turn yellow, and the plant dies as a result of this damage. Squash, pumpkin, zucchini, and gourd plants are all eaten by the grubs.

The harmless moths with black heads, an orange abdomen with black dots, and hairy orange and black legs that feed on squash vine borers are called squash vine borers. Moths are frequently seen flying around gardens during the day, settling on leaf bases in the evening or early morning. If you notice squash vine borers on your squash plants, it’s crucial to catch them and collect their eggs.

Squash vine borers damaged leaves look like they’re wilting. Because the plant-destroying larvae consume the inside of squash vines, the plant is deprived of nutrients and moisture. The whole plant will eventually wilt. Fecal matter that looks like sawdust is another indication of squash vine borer damage. At places on the stem where the plant withers, this yellowish material can be seen.

How to Prevent Squash Vine Borers

When it comes to squash vine borers, prevention is much more important. Moths should be prevented from laying eggs and squash plants should not be planted where the grubs previously caused problems, thanks to a multi-method approach for pest control. So, before we talk about how to insecticide squash vine borers, let’s explore some non-chemical techniques.

Planting squash early in the season is an excellent method to avoid squash vine borer damage. This way, the vines will be able to tolerate mid-summer larvae damage and remain strong. The squash harvest may be completed before the grubs become active depending on the weather.

Top tip for preventing squash damage: Use a layer of hay, old blankets, or damaged cardboard boxes to protect early-planted squash from frost if you have late frosts.

Crop rotation is a important control tactic for squash vine borer grubs. Squash borer larvae emerge just as squash vines are beginning to grow in the ground. As a result, cucurbit plants can’t infest their host plants if they’re planted in a new location every other year. You’ll also need to check all squash plants on a regular basis for egg and larval activity, though.

Squash borers can be prevented from entering vines by using physical barriers. As an non-toxic method to manage squash borers, you may try covering cucurbit stems with aluminum foil or nylon stockings. From the soil level, cover the stems with 3″ (7.5 cm) of soil. As a result, you keep adult moths from laying eggs in this manner.

You could try companion planting as part of your battle against squash bugs. Radishes are said to discourage moths and other common garden pests, according to some gardeners, so they should be planted near squash plants.

Try using traps to capture the moths before they lay eggs to reduce the numbers of adult squash vine borers. You may put soap solution-filled containers next to your squash plants in yellow containers. The squash vine borer moths are supposed to be drawn to the yellow color, and once they land in the soapy water, they will be unable to escape.

From late June through July, place squash borer traps. Placing a tiny crop of Hubbard squash early in the season is another technique to “trap” squash vine borer larvae. Vine borer infestations are particularly dangerous for Hubbard squash. Since most moth eggs are laid on the early-sown “trap crop,” larvae pressure on other squash crops is relieved.

Collect all of the vine’s parts and throw them in the compost after you harvest the crop at the conclusion of each season. In addition, any overwintering larvae in the soil must be destroyed by tiling. The next year, you can help prevent squash vine borers from occurring by doing this.

How to Control Squash Vine Borers

A naturally occurring soil bacteria that acts as an natural insecticide is Bacillus thuringiensis. Spraying plants or injecting Bt into squash vines has been proven to be an effective method of killing squash vine borers, according to research. Bt is also effective against squash borers, while being safe for organic squash production.

Bacillus thuringiensis (Bt) is effective at controlling squash vine borer, according to studies, and may entirely prevent infestations, contrary to the prior industry standard of endosulfan.

Inspect the stems of control squash vine borers for eggs and manually remove them. Seven to 14 days are required for the tiny brown oval eggs to hatch. In order to check for and remove the eggs, inspect the base of stems every day. You may also check for a hole and sawdust-like substance in the plant to see if you can find evidence of a borer.

Before irreversible harm is done to squash plants, it is feasible to remove immature larvae. First, check the base of squash stems for holes that indicate infestation. Shine a flashlight on the stem when it’s dark. The grubs’ nasty habitat will be shown by the dark patches on the stem.

Make a cautious cut on the stem lengthwise if you find any larvae, and remove the grub. Finally, to kill it, put it in a cup of soap water. You may alternatively kill it instantly by putting a toothpick through the stem. Lastly, cover the effected section of the stem with mulch.

Vine borers may be prevented from infecting squash plants with a neem oil spray. To begin with, mix 2 tsp. of sugar and 2 tsp. of honey 1 tsp. of neem oil in a spray bottle, 1 quart (1 liter) of water and liquid Castile soap Spray the base of the stems with a neem oil solution to kill eggs when the adult moths are active. It’s important to keep in mind that vine borer larvae can only be controlled with neem oil sprays. Any larvae already present in the plant will not be killed by neem oil.

Squash vine borer larvae are resistant to diatomaceous earth (DE). Adult vine borer moths may be deterred from laying eggs by the white powder. DE, on the other hand, is less effective than traditional squash vine borer management techniques.