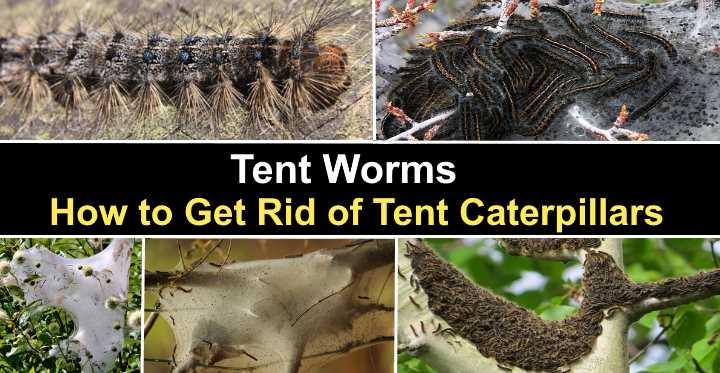 The genus Malacosoma includes Tent Worms, a kind of caterpillar. They have white markings on their backs and hairy spines and are also known as tent caterpillars. They have long slender bodies up to 2″ (5 cm). Tent worms must be eliminated before the caterpillars can devour a whole tree, robbing it of leaves. Large tent-like webs spun by tent worms to protect larvae earned them their name.

Natural predators help to keep tent worms in check. Hundreds of tent-like nests with plant-destroying crawling insects may, however, emerge in the spring. The larvae are ravenous, and can devour a great deal of flora as they feed. Neem oil, Bacillus thuringiensis bacterium, and the introduction of beneficial insects are some natural ways of destroying tent worms (tent caterpillars).

In the autumn, you can eliminate caterpillar egg nests to avoid tent worms. This article is a thorough guide on how to cure tent worms without using chemicals. You’ll learn about the Malacosoma life cycle as part of your tent worm control training, since understanding about these caterpillars’ behavior is key.

What are Tent Worms? 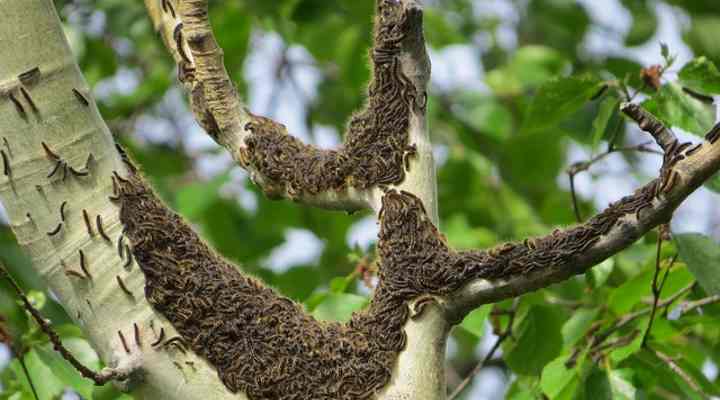 Late spring and summer are good times to see tent caterpillars. Tent worms have a voracious appetite, similar to other caterpillars. Although the hungry caterpillars will not kill diseased trees, they may strip them of their leaves, exposing them to the elements.

Fall webworms and tent worms are comparable. These caterpillars create tent-like webbing to defend themselves. Webworms are usually on the ends of tree branches, whereas tent worm nests are often in the crotch. In addition, in the spring and summer, tent caterpillars devour vegetation, and in the autumn, webworms do. 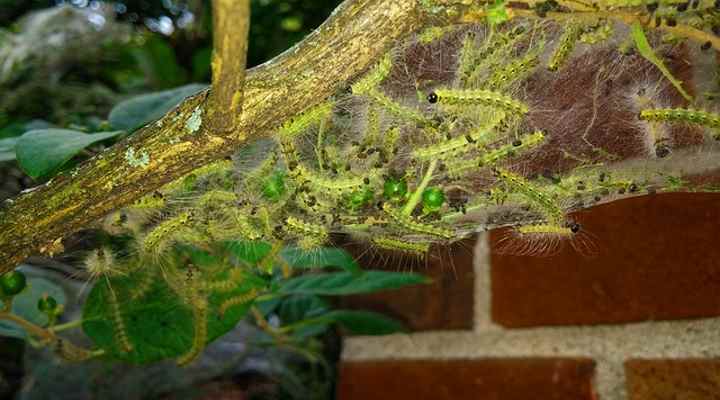 Fall webworms, which look a lot like tent worms, are depicted in this image. They may be white to black in color, depending on the species.

Tent worms are black hairy caterpillars that eat through tree leaves and may be seen on trees. The white markings on the tent worm’s abdominal segments may help you identify them. The spiky body of the wriggling caterpillars gives them a fuzzy look, making them easy to identify. Let’s take a closer look at the tent caterpillar species in question. 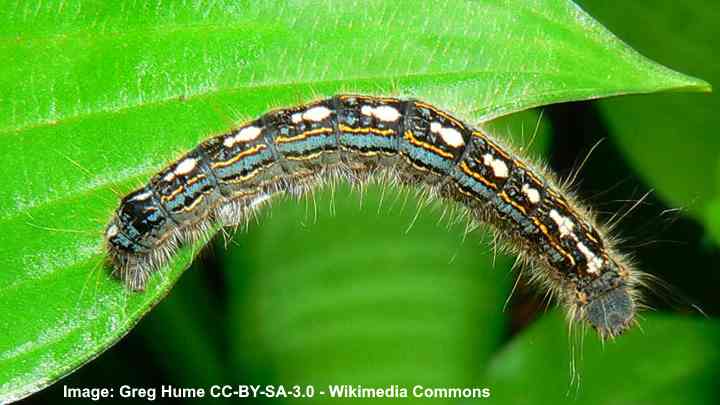 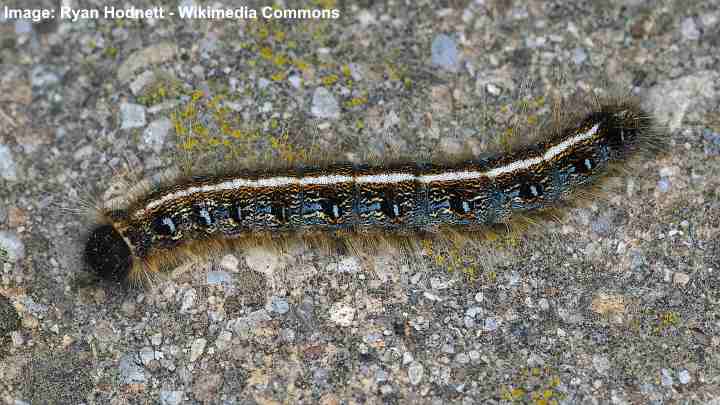 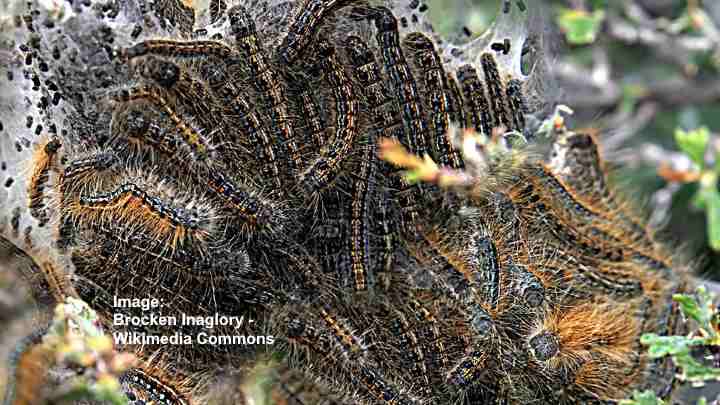 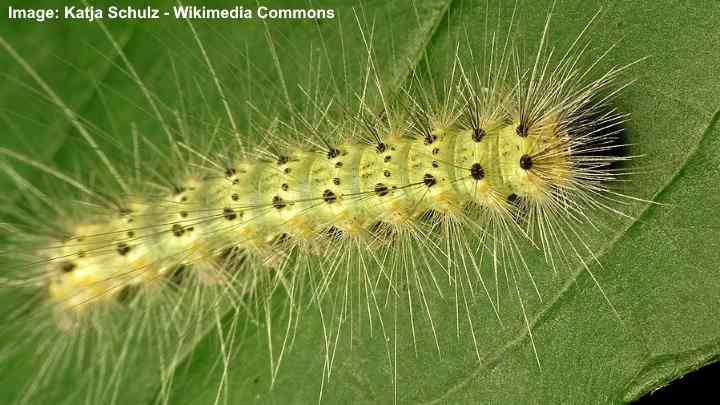 Tent caterpillars (Malacosoma species) and fall webworms (Hyphantria cunea) look a lot alike when viewed from up close. Look for tent-like webs and markings to determine between the two species. Caterpillars can be identified in a variety of ways: 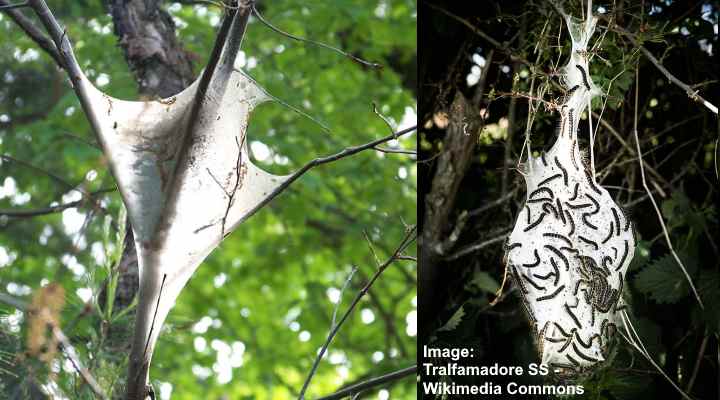 The tent caterpillar’s life cycle begins with female moths depositing a cluster of eggs on branches. A brown mound connected to a limb appears to be the caterpillar egg cluster. A cluster of 400 eggs may be seen. In the spring, the tent worm eggs emerge and begin to eat foliage on the host tree.

The larvae chew through fresh buds, leaves, and blossoms as they feed in packs. In six weeks, the caterpillar grows and changes instars five times after hatching. The tent worms are now almost hairless and measure 2 inches (5 cm) in length.

The pupa stage, in which the caterpillar becomes a moth, is the next step in the tent worm life cycle. The moths emerge from the cocoons after two weeks, and the females start another tent worm cycle by laying eggs.

The annoying caterpillars only have one generation per year, which is helpful when it comes to exterminating tent worms. The following year will be free of tent worm caterpillars if you remove the eggs from your tent.

Where to Find Tent Worms

Knowing where to find the creepy crawlies is the first step in eradicating tent worms. In your yard, look for decorative plants, fruit trees, and shrubs. Look for tents with big, silky branches that meet the main stem or tree trunk. On trees and shrubs, it’s not uncommon to find a slew of little tent worm nests.

You may observe masses of black caterpillars wriggling around the tent worm nest if the infestation is already substantial. Where the web-spinning caterpillars have been feeding, you’ll likely notice damaged leaves.

Tent worms’ most serious damage is foliation. Hundreds of tent worms may strip blossoming trees, fruit trees, flowers, and decorative plants of their leaves if they are notchecked. The caterpillar damage makes plants appear unsightly, despite the fact that tent worms seldom kill trees.

Plant development is also hampered by tent caterpillar damage. Tent worms feed in groups, which contributes to their destructive nature. During the day, the burrowing creatures retreat to their protective webs to eat. Moreover, the ravenous worms may begin devouring nearby vegetation, causing even more damage.

How to Get Rid of Tent Worms

Protecting your garden plants from severe damage may be aided by killing tent worm eggs and larvae. Removing and destroying the nests, using a natural insecticide on plants, and preventing tent caterpillar moths from laying more eggs are all part of getting rid of tent caterpillars.

Let’s explore techniques for getting rid of tent caterpillars from trees, shrubs, and flowery plants in further detail.

The first step in your war against tent caterpillars is to manually remove the worms. The early morning or late evening are the best times to catch these leaf-eating insects. The gorging insects are usually found in their web tents at this time of year. Take a big stick and wrap the silky web structure around the end to kill tent worms without using chemicals.

Then, carefully place the web and the caterpillars in a tub of hot, soapwater. The hot water and dish soap will suffocate fat tent worms. Imagine if there are several little nests on trees, or if the trees are bigger. You may need to utilize natural pesticides to get rid of the squirming bugs in that scenario.

To kill garden pests like tent caterpillars, spray them with natural neem oil. Combine 2 teaspoons neem oil, 1 teaspoon liquid Castile soap, and 1 quart (1 liter) of warm water to make a neem oil spray. Spray tent caterpillars-infested areas with a spray bottle to get rid of them by mixing the ingredients in a spray bottle.

For the best outcomes in eliminating tent worm infestations on trees, shrubs, and decorative plants, use the neem oil spray once a week.

Azadirachtin, a naturally occurring insecticidal substance, is found in neem oil, which works on tent worms. Larvae growth and development are disrupted by natural pesticides, which prevents them from feeding. You will protect plants from other nasties while not harming beneficial insects or bees by spraying them with neem oil.

Tent caterpillars can be gotten rid of using Spinosad, an organic pesticide spray. Buying a commercial product is the simplest way to utilize Spinosad spray against tent caterpillars. Organic gardening methods can be used with the majority of Spinosad sprays. Spinosad is a harmful soil bacterium that naturally occurs in the environment.

You may utilize Spinosad to get rid of leaf miners, spider mites, thrips, and other garden pests in addition to spraying it on tent worms. Spinosad affects the brains of harmful insects and larvae, affecting their nervous system.

Spinosad may be effective on Malacosoma species, according to scientific evidence. According to research, certain Malacosoma larvae, especially in their fourth and fifth instars, are poisoned by the chemical.

Spray Tent Worms and Eggs with Bacillus Thuringiensis to Kill Them

Tent worm larvae are eaten by birds. You’ll help reduce a huge number of tent caterpillars if you make your yard bird-friendly. Tent caterpillars are most vulnerable when they’re in their early stages, which are the first or second instars.

How to Prevent Tent Worms 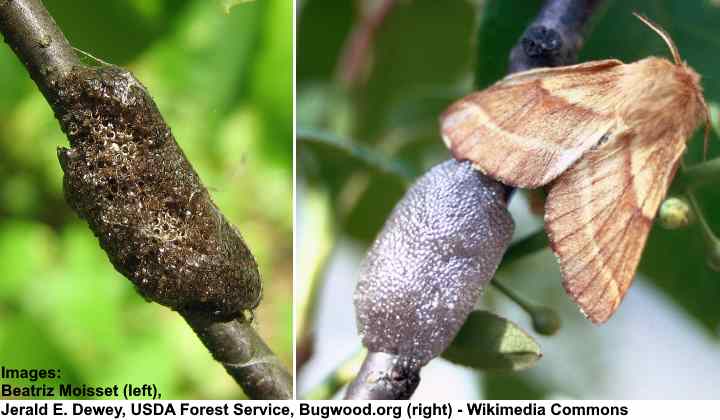 Eradicating cocoons in the summer is another way to avoid tent caterpillars. Seal the cocoons in a bag and throw them away in the trash. Look for tent worm infested trees with yellow or white cocoons hanging from them. In sheltered locations, you might also find Malacosoma cocoons on fences, tree trunks, and debris.

By trimming sick branches, you may also prevent tent caterpillars from invading your garden and destroying crops. On apple, cherry, plum, and broadleaf trees where you notice the distinctive caterpillar web tents in the spring, prune branches. Caterpillars can’t hatch on trees or bushes if the pruned foliage is thrown away in the trash.

It’s a good idea to bring a bucket of soapy water with you when you’re removing tent caterpillars. You may eliminate tent worms by dumping them in the cleansing liquid if you discover any crawling around on the ground or on trees.

Top tip when removing tent caterpillars: Tent worms should be avoided if possible. They create unsightly blemishes that are difficult to eliminate.