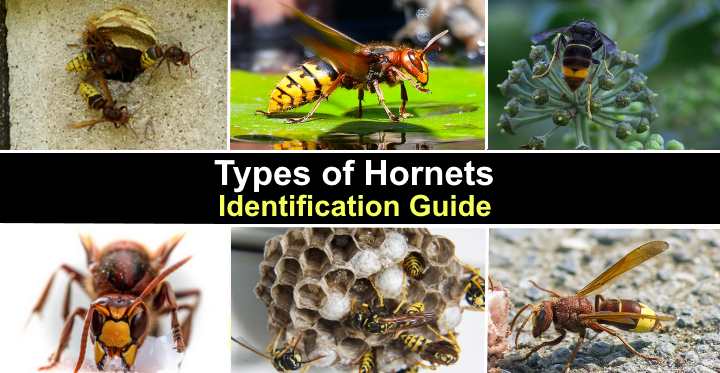 With brown and yellow stripes on a black or yellow body, a hornet is a kind of huge wasp. Venomous stingers found on hornets can cause a excruciating and occasionally lethal sting. Hornets from Asia are known for being aggressive, including the Asian hornet and the Japanese giant hornet. But, if you approach the European hornet nest too closely, you might be attacked by the hornet. Papery nests are used by hornets, which are social flying insects.

It is important to know how to differentiate between harmful and non-harmful insects when identifying hornets. Moreover, understanding the hornets’ environment may help you avoid having issues with hornets in your yard or home. This article is a resource for identifying the most frequent kinds of hornets that may be seen in your garden.

Hornets are related to wasps and belong to the insect genus Vespa and family Vespidae. The big head of a hornet is distinctive, with a wide upper border. Furthermore, between the thorax, which houses the two sets of wings, and the abdomen is a significant size gap. Hornets may have yellow or brown stripes, or be dark-colored with orange bands depending on the species.

Hornets are territorial insects that will only attack if their nest is under threat. Asian giant hornets, on the other hand, may cause significant injury. Other hornets in the nest are mobilized by Hornets’ release of an attack pheromone. A severe hornet attack can also be triggered by the scent of dead hornets on clothing or dead hornets.

Sugar-rich plant materials, oak tree sap, honey, and rotting fruits are all eaten by hornets. Grasshoppers, bees, katydids, and locusts are among the insects attacked by adult hornets. Large insects can be quickly killed by the venomous hornet sting.

The North American yellowjacket (Dolichovespula maculata) is similar to Hornets (Vespa), but they shouldn’t be confused. Yellowjacket is a distinct genus from hornets, despite the fact that it shares certain characteristics with them. 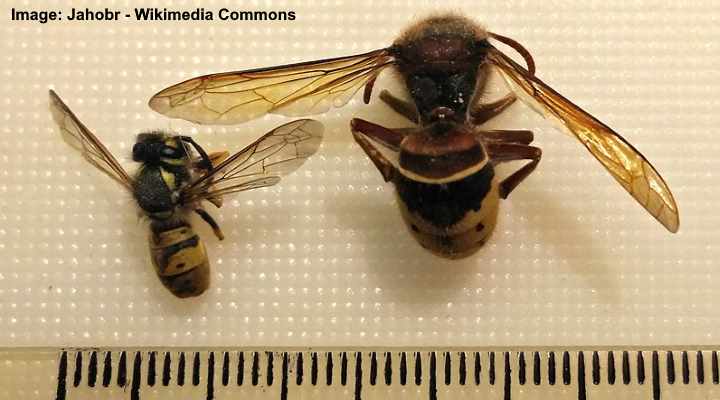 The major difference between wasps and hornets is size and color, as seen in the illustration on the left. The majority of wasps are about 0.4 inch (1 cm) long. Giant hornets, on the other hand, may grow to be over 1.6″ (3.8 cm) in length, with queen hornets reaching 2″ (5 cm). The European hornet, in comparison to wasps, is less territorial. 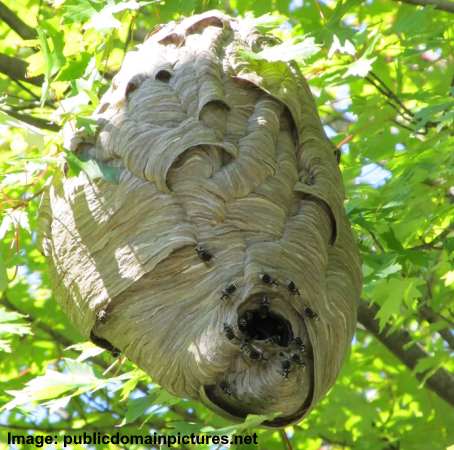 High up in tall trees, hollow trunks, huge shrubs, or rooftops are all common habitats for hornets. Some hornets, on the other hand, build subterranean nests in shaded dry areas or abandoned burrows. By chewing on woody materials, they make papery nests.

Hornet nests are shaped like a solitary entryway and have the appearance of a gray globular or conical papery edifice. Never try to remove a hornets’ nest if you see one in a tree, attic, under a roof overhang, or eaves. Instead, if you want to get rid of a hornets’ nest, call in the pros.

The species determines the color of the hornet. Red and brown patterns on a dark thorax distinguish the common European hornet (Vespa crabro). It has thin brown stripes and markings on its body, which is mostly yellow. Darker in color than Asian giant hornets (Vespa mandarinia).

The thorax is dark brown, and the head is mostly orange. With orange bands around the long body, their abdomen is dark brown. The Asian hornet (Vespa velutina) has a mostly dark, stripe-less abdomen that is likewise dark in color.

The sting of a hornet is five times more powerful than a wasp’s sting and is very venomous. Acetylcholine makes up 5% of a hornet’s venom, which is sufficient to kill tiny mice. Sting from a hornet can cause anaphylaxis, which may lead to heart failure and even death in some cases.

In the United States, Asian giant hornets were discovered in 2019. These highly venomous hornet species were discovered, and the term “murder hornet invasion” was used in headlines. However, doctors claim that “murder hornet” attacks are uncommon and only if the nest is threatened. If a hornet stings you, it’s best to seek medical attention because of the possibility of allergic responses.

How to Identify Hornets

The majority of hornets are identified by their size. Hornets, which resemble huge wasps, are enormous 1.5″ to 2″ (3.8 to 5 cm) flying insects. The head of a hornet is distinctive, with a relatively broad upper border. The dark upper body and yellow-striped abdomen of a hornet can be distinguished easily. Imagine seeing a huge wasp the size of your thumb flying about and hearing its deafening, buzzing wing sound. In that case, it’s likely to be a hornet, not a yellowjacket or wasp.

Type of Hornets with Names and Pictures (Including Identification Guide)

European hornets are more prevalent in the United States than Asian hornets, though they are less prevalent. Identifying hornet species is a little tougher. 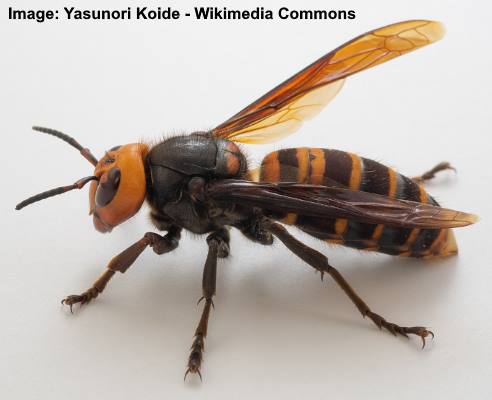 The insect has a huge orange head, black thorax with orange patterns, and brown abdomen with orange stripes. It is known as the Asian giant hornet (Vespa mandarinia) because of its size. Two brown antennae, dark brown or black eyes on an orange head, and large orange wings with a wingspan up to 3 inches (7.5 cm) are some of the identifying features of the Asian giant hornet. Six brown legs may also be noticed.

These insect-murdering “hornets” target honeybee colonies and kill off other insects. The hornet decapitates bees quickly with its large mandibles. One bee may be killed every minute by the “murder hornet. Tree sap, honey, nectar, and soft fruits will also be consumed by the enormous wasps.

The stinger of a giant Asian hornet is 0.23″ (0.6 cm) long. The stinger’s venom is more concentrated than that of a bee or wasp, and it’s the same as theirs. A single Asian giant hornet’s sting may feel like a hot nail being pushed into your flesh. Multiple Hornets Stings can be fatal, despite the fact that a single sting is uncommonly deadly.

Asian Giant Hornet Nest: Hornets build nests on the tops of trees and buildings. Or, they may dig up abandoned burrows and make subterranean nests. Nests may be up to 50 cm in diameter.

Asian Giant Hornet Color: A brown and orange striped abdomen, with a redish-orange pattern on the head, thorax, and abdomen. 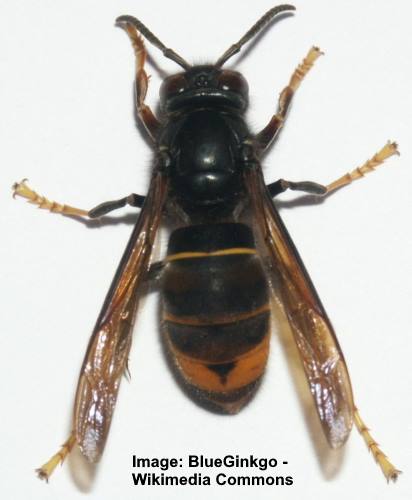 The Asian hornet has a dark brown or black head, thorax, and body with dark yellow or orange stripes on its abdomen. It is a small hornet that mainly feeds on nectar. In addition, Asian hornets have yellow legs that set them apart. Thousands of flying insects may be housed in Asian hornet nests.

The Asian hornet isn’t to be confused with the larger Asian giant hornet, which is also known as the yellow-legged hornet. The Asian hornet, like the bigger species, is a honeybee predatory insect. A hornet, for example, may capture a bee as it returns to the hive by hovering over a bees’ nest.

Vespa velutina Hornets are native to Asia, as the name implies. Yet, in numerous European nations, including the United Kingdom, Spain, France, Portugal, and Belgium, they have become an invasive pest. Yellow-legged hornets are an invasive species that beekeepers fear will rapidly annihilate honeybee populations.

Asian Hornet Nest: The hornets create papery, egg-shaped nests that may be up to 20 inches (50 cm) long.

Hornet Identification: A dark-colored abdomen with thin yellow stripes and a wide orange band at the base distinguishes an Asian hornet. The yellow legs of Asian hornets distinguish them from other hornets. One of the numerous insects that resemble bees is Asian hornets. 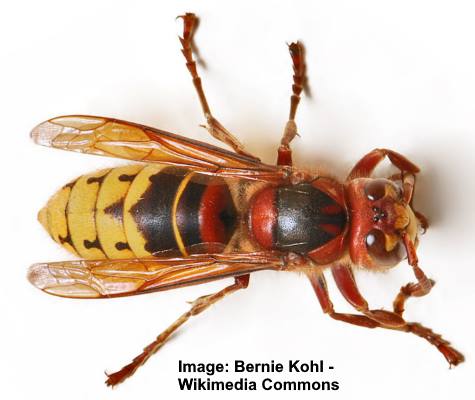 The European hornet, a huge striped yellow and brown wasp found throughout Europe and North America, is one of the largest. The dark orange head, black thorax with orange patterns, and yellow abdomen with black or brown stripes of European hornets are all distinct.

Protected areas are often used by European hornets to build nests. As a result, instead of hanging high up in a tree, you’re more likely to come across the hornets’ nest in an attic, barn roof, tree hollow, or wall void. The papery structures, which usually house 300 to 500 hornets, are smaller than those seen in Asian species.

Soft fruits, tree sap, nectar, and honey are all favorite foods for European hornets. Moths, dragonflies, beetles, and wasps are among the tiny creatures they’ll target. European hornets are not a danger to bees like Asian hornets, but they will kill honeybees. European hornets have venomous stings, as do other wasp species. If they feel threatened or disturbed, they’ll sting someone. hornets, on the other hand, are less likely to sting and have lesser venom than Asian hornets.

European Hornet Nest: Papery nests are made by hornets in tree holes, wall gaps, and inside agricultural buildings. Unlike Asian hornets, European hornets do not construct nests in unprotected areas.

Hornet Identification: In comparison to its head size, the European hornet is recognized as a huge yellow wasp with a striped body, a rusty orange thorax, and an orange face. Six reddish-brown legs, orange antennae, and transparent light brown to orange wings are some of the other identifying features. 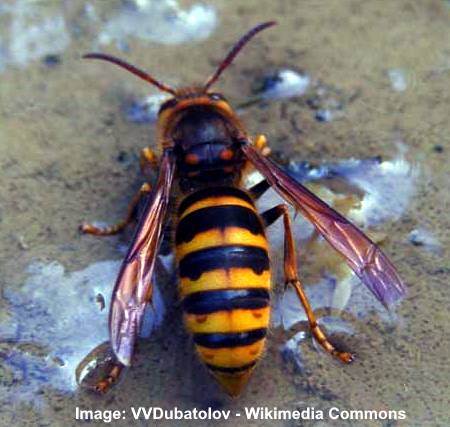 Hornet Identification: The abdomen of a yellow hornet is bright yellow, with black stripes around it. 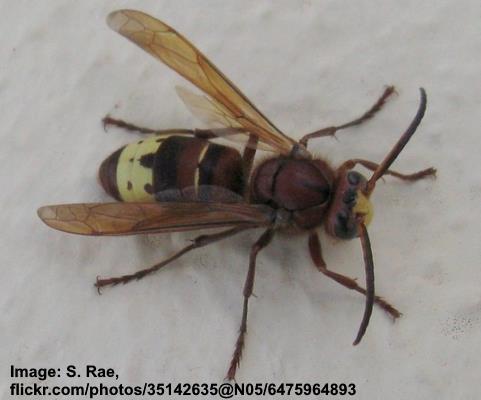 The oriental hornet, a little reddish-brown hornet with yellowish bands at the base of its abdomen, is a Vespa orientalis. Six brown legs, a fuzzy thorax, and transparent light brown wings are some of the other identifying features. Oriental hornets are about 1.4″ long (3.5 cm) and smaller than Asian hornets. Oriental hornets are most often discovered in subterranean nests. Papery nests are occasionally built in tree hollows by them.

Hornet Identification: The discernible thick yellow bands on the abdomen and yellow markings between the eyes are characteristics to look for when identifying an oriental hornet. 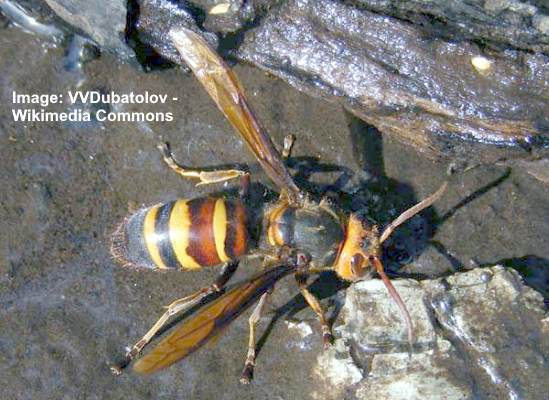 Hornet Identification: The yellow and brown bands that surround a black-tailed hornet’s abdomen, as well as its characteristic black tail, may help you identify it. Also, its six yellow and brown legs and big brown wings should be noted. 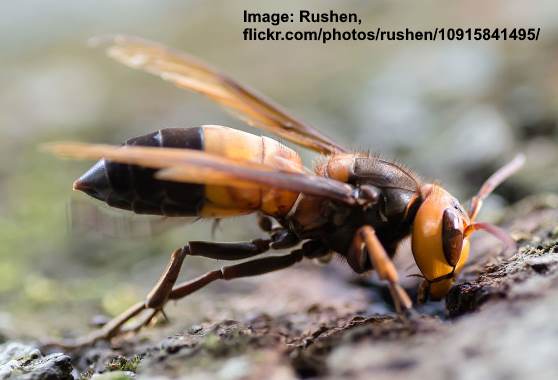 A huge hornet native to Asia, the Vespa soror is a powerful hornet. The body is light orange and brown, with a black fuzzy thorax and pale orange wings. The head has two long antennae, which distinguishes it from other species. Workers are 1.4 inches (3.5 cm) long, and queens are 1.5 inches (4 cm) long. Honeybees, wasps, dragonflies, mantids, and grasshoppers are prey for Vespa soror hornets, which feed on sweet things.

Hornet Identification: The two bands that encircle Vespa soror’s body, one black and the other orange with brown markings, are easy to distinguish. An orange patch at the base of the black thorax. The eyes look disproportionately tiny because of a broad yellowish-orange head. The lower legs, too, might appear pale orange. 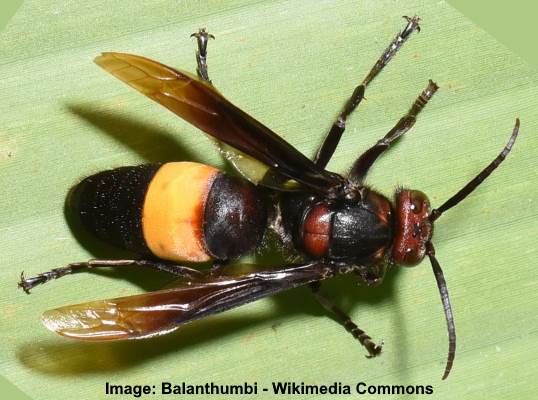 With a black thorax and black abdomen, the Greater Banded Hornet (Vespa tropica) has a distinct wide yellow band that distinguishes it from other hornets. The queens are 1.2″ (3 cm) long, and the larger banded hornets are 1″ (2.5 cm) in length. Wasp and honeybee larvae are eaten by hornets, who capture and kill honeybees.

Greater banded hornets build enormous papery nests in trees and shrubs that can reach 10 feet (3 meters) in diameter. Attics, roofs, sheds, and subterranean burrows are also possible nesting sites. Some bigger banded hornets may be totally black depending on the area.

Hornet Identification: The black abdomen of the larger banded hornet is bordered by a wide yellow band. The dark brown markings on the thorax and six black legs of the hornet distinguish it from other wasps.