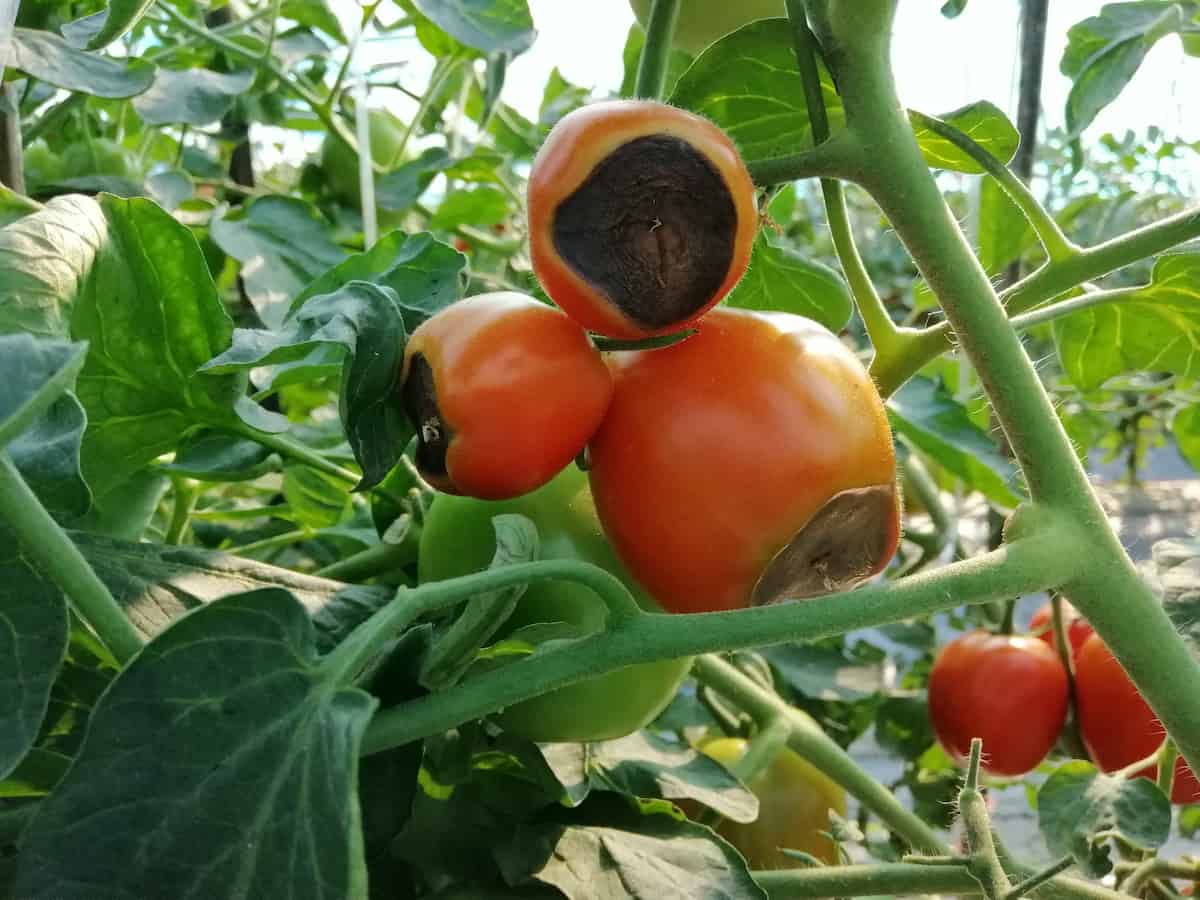 Congratulations on having blossom end rot if you see that your tomatoes are rotting on the bottom. No, it’s not a prize; rather, it’s one of the most prevalent issues you’ll encounter among tomatoes, squash, and numerous other veggies in your garden.

It’s painful to see your plants’ blossom fall Victim to rot. Seeing inedible tomatoes hanging from the plant or rotting squash beneath the leaves after all your hard work can be a shock.

It makes you wonder what’s wrong with you and how to prevent it from deteriorating. Here’s what you should know.

What Is Blossom End Rot? 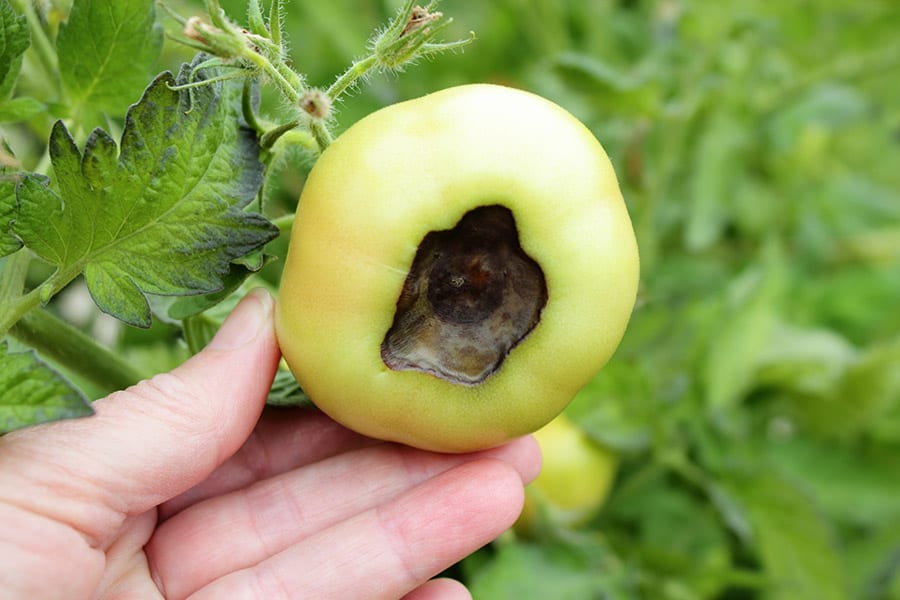 Blossom end rot is a condition that causes the tissue on the bottom end of the fruit to deteriorate and rot when your plants have it. As a result, the fruit produced has a lower quality and the plant’s yield is harmed.

This disorder is common in:

Despite being a bother, it is prevalent in vegetable gardens. It’s worth noting that it isn’t caused by fungus or bacteria, so fungicides and insecticides aren’t effective.

Calcium deficiency is the cause of Blossom End Rot, but adding calcium to your soil may not help.

The Signs of Blossom End Rot

How can you tell if your plants have this disease?

It usually appears when the fruit is still green or just starting to ripen. That has an impact on the first fruits you harvest from your plants.

A little, water-soaked region on the blossom end of the fruit is common when it begins. The opposite end of the stem is located in this area. It begins as a dark bruise that grows larger quickly. The location soon becomes hollow and dark brown, or even black.

A calcium deficiency in the plant, which may be brought about by decreased calcium levels in the soil or soil that is either over or under-watered, is the principal cause of blossom end rot.

Since plants have difficulty absorbing calcium from the soil when it experiences large variations in moisture, this is the case. The tissue begins to breakdown when a plant’s demand for calcium exceeds the existing supply. This is known as blossom end rot.

Calcium deficiency during fruit development isn’t caused by inconsistent watering. There are a number of other potential causes:

Blossom-end rot is not uncommon among the first tomatoes of the season. During the first fruit set, plants seem to be under greater stress. Because of the fluctuations in moisture, it may also be more common in plants grown in containers.

You cannot stop the rot from spreading to other fruits on your plants, but you can prevent it from progressing further and damaging them.

Instead, your objective should be to actively prevent it from occurring in the first place. You’ll need to know how to stop the problem from getting worse if it develops in your garden.

For tips on preventing blossom end rot, read on.

Certain tomato cultivars, on the other hand, are more likely to suffer from this problem:

Have a Watering Schedule

Remember this piece of advice above all else. The biggest cause of calcium deficiency is watering that is inconsistent, so establishing a regular watering schedule is critical.

Watering on a regular basis and evenly is critical. If you missed a day of watering, don’t overdo it; water normally. Plenty of good drainage is important for garden beds. Instead of frequently and shallowly, water deeply and less often.

Each week per square foot, most plants require roughly one inch of water. Thus, a big eggplant is required by sprawled squash plants.

Near your plants, stick your fingers into the soil. It should be damp 2-3 inches deep.

Using mulch is another way to keep your plants watered properly. During dry spells, organic mulches help your soil hold onto moisture.

Dry spells are something that you’ll encounter; they’re unavoidable. Soil drying out faster than you can water it is a risk during heat waves. 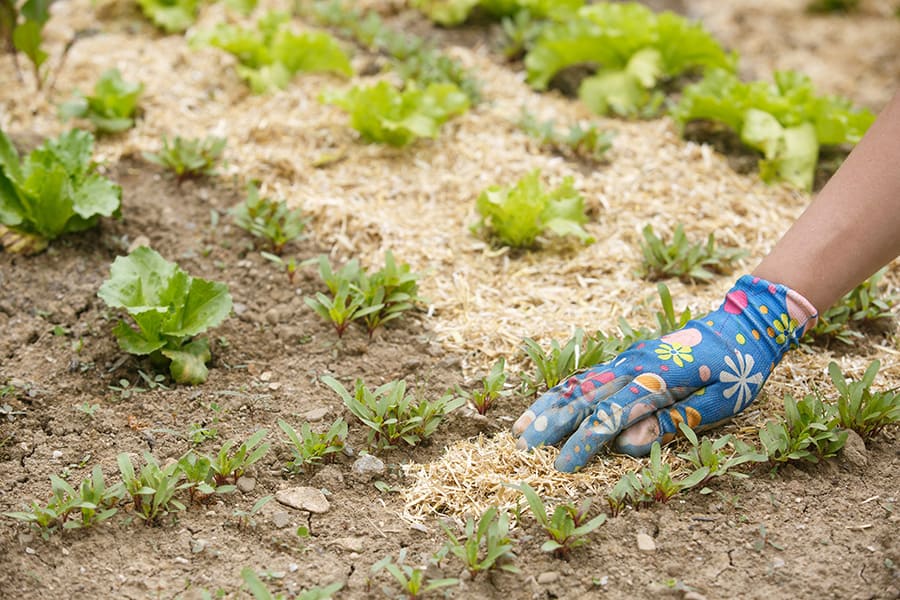 Over your garden bed, try using organic mulches. This not only helps you save time pulling weeds by reducing their growth, but it also retains moisture in the soil and maintains soil temperature.

Mulch types you may employ include:

Keep Your Soil Warm But Not Hot

When you sow your seeds or seedlings, you want nighttime temperatures to be at least 55°F. This is a good general rule of thumb. A soil thermometer may be used to confirm this.

You may cover your planting area with black plastic if your soil temperatures aren’t high enough, or wait until they naturally increase.

It’s a good idea to examine your soil’s calcium levels on a regular basis to ensure that they’re adequate. Calcium levels in new, store-bought soil will be high, but they may be depleted as time passes.

If a test shows that your soil lacks calcium, what can you do?

Add calcium from natural sources, such as:

It’s enhanced adhesion by combining it with a natural surfactant, and it won’t run off the leaves.

If you employ lime as a calcium source, you’ll also have to check your soil’s pH range on a regular basis. Lime is acidic, and it may make the surroundings unsuitable for many plants if it is used.

Most vegetable plants prefer a pH of 6.5, which is somewhat acidic but ideal.

So keep in mind that if your plant doesn’t get the correct quantity of water or if the soil pH is incorrect, it won’t be able to utilize all of the calcium in the world.

It’s just about laying the groundwork to have the appropriate quantity of calcium in the soil.

A normal response to this problem would be to fertilize your plants more since it is caused by a calcium issue. We supplement our diet with calcium and take a calcium supplement if we need more.

So, will it work for plants as well?

Nope, not at all. Your plants struggle to absorb enough calcium in most cases because your soil has plenty of it. You’re also contributing more nitrogen, magnesium, and potassium when you add more fertilizer, making blossom end rot worse.

Since it may boost growth while also lowering calcium absorption by your plants, don’t add too much nitrogen to your soil.

Be Gentle With The Roots

The roots’ ability to absorb moisture and nutrients may be impacted by damage. You should also make sure to avoid digging or disturbing the soil around the roots.

When you stake your tomato plants, one of the biggest offenders is. When my plants get too big, I know I’ve forgotten to stake them. Since you’re less likely to stress the roots when they’re young, staking is a good idea.

Epsom salt is often recommended as a solution for every tomato issue, however that isn’t the case. Epsom salt does not help with ending or preventing blossom end rot, despite the fact that it may be useful to raise magnesium levels. In fact, it might make things worse!

Magnesium sulfate is the most common constituent in Epsom salt, which has no calcium. A calcium deficiency may be exacerbated by too much magnesium in your soil. 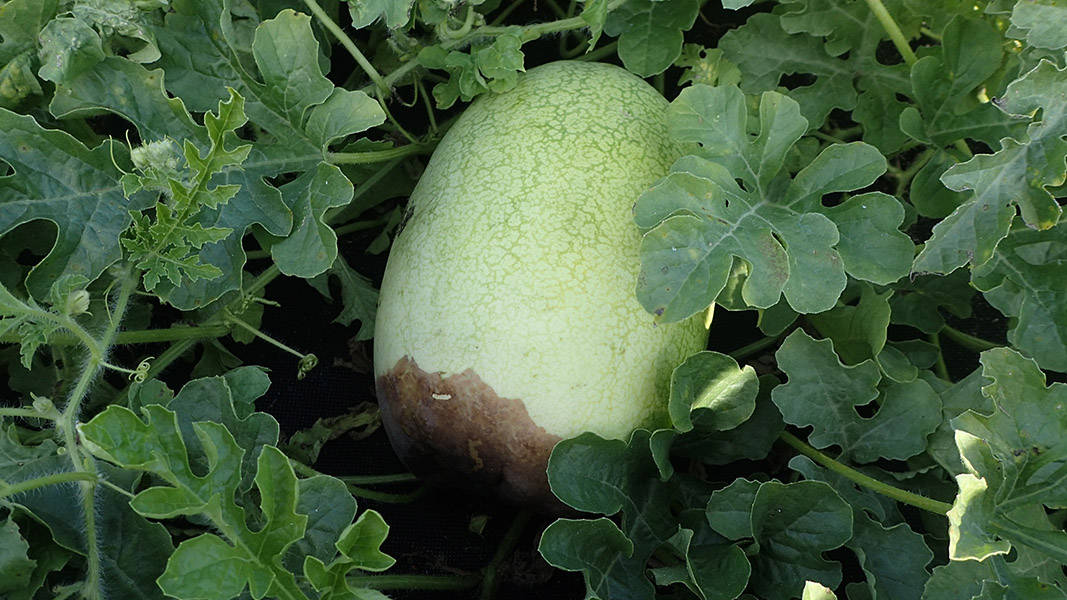 Unfortunately, blossom end rot is a problem that all gardeners face from time to time. You may prevent this problem from ruining your harvest by watering on a regular basis, maintaining soil pH, and supplementing with calcium when calcium concentrations are determined to be too low.