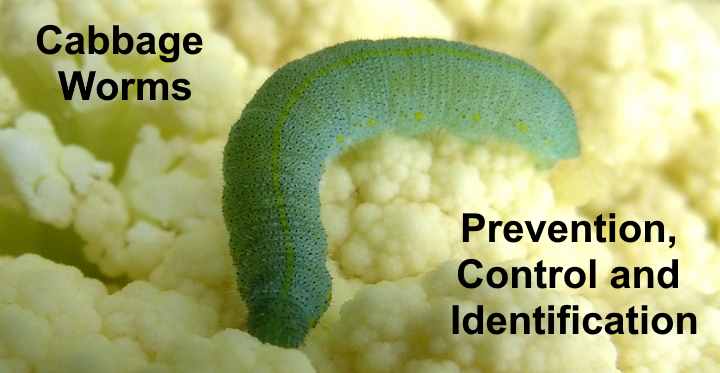 If you grow kale, cabbages, broccoli, or other Brassica crops, cabbage worms are a common garden pest. To minimize the harm cabbage worms do to your crops, you must get rid of them fast. To avoid cabbage moths from reproducing and producing leaf-destroying caterpillars, cabbage worm eradication normally requires integrated pest management measures.

This guide to controlling and eradicating cabbage worm in your garden is a complete guide. To help you find the cabbage butterfly larvae beneath cabbage, broccoli, kale, and Brussels sprout leaves, you’ll also learn how to identify them.

What are Cabbage Worms? 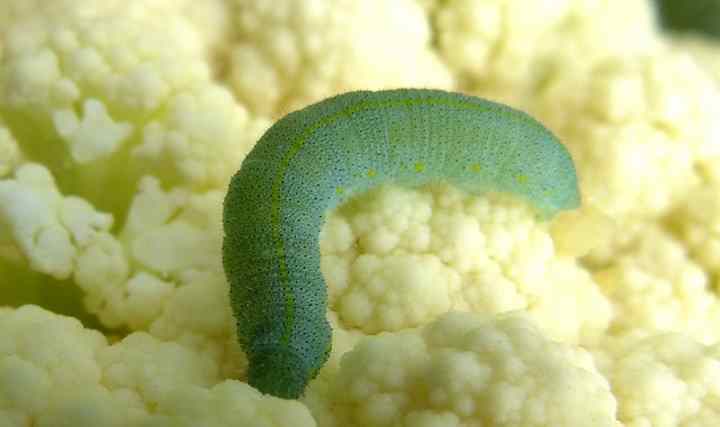 Cabbage worms are up to 1.2″ (3 cm) long and have a green, velvety appearance. A thin yellow stripe runs down the middle of cabbage worms’ backs. Green worms belonging to the brassica family may be seen on the underside of plants.

Signs of cabbage worm damage may be helpful in identifying the green cabbage worm if their numbers are high. Cabbage worms are generally active when holes in mustard greens or cruciferous veggies are present. It’s important to understand how to identify cabbage butterflies (also known as cabbage moths) in order to prevent a cabbage worm infestation.

Creamy-white wings with black wingtips and two black marks in the center of the forewings characterize this cabbage worm butterfly. 1.3 to 1.9 (3.2 to 4.7 cm) is the average size of the white butterfly. 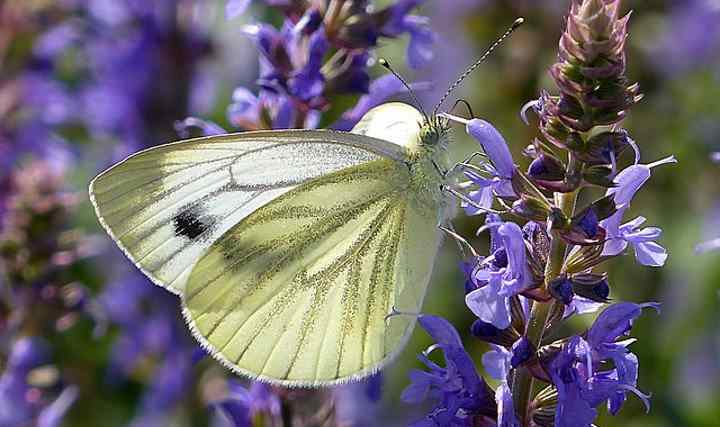 It’s best to check for indications of cabbage worm eggs and larvae as soon as you notice white cabbage butterflies fluttering about plants during the day. 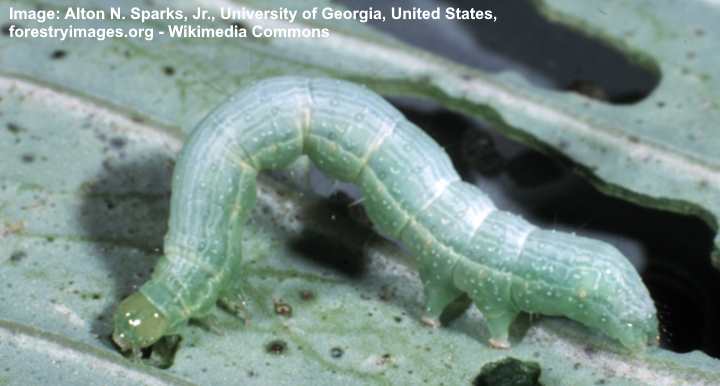 Cabbage worms are commonly mistaken with cabbage loopers (Trichoplusia ni). Although they are different species, both green caterpillar varieties destroy cabbage plants. While cabbage loopers crawl on plants, they arch their bodies in a looping motion, which is an identifying feature. Cabbage loopers feature a white stripe on the side of their heads. 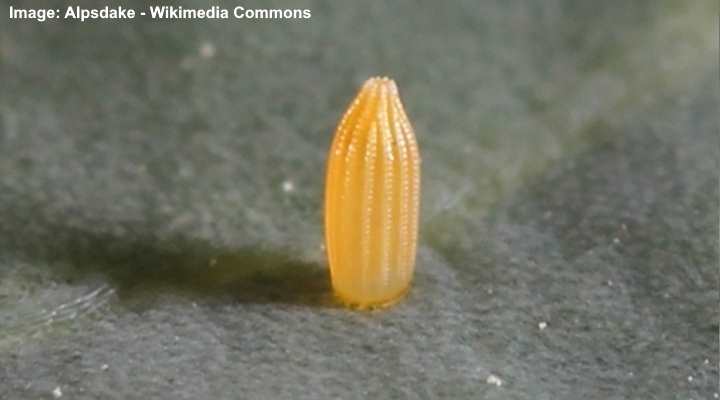 Cabbage worm eggs are tiny yellowish oblong dots with raised ridges that are 1 mm long. They look like this close up image. The underside of leaves is where the little white butterfly deposits eggs in irregular patterns. A great way to avoid a cabbage worm epidemic is to crush the tiny yellow eggs. Cabbage worm eggs are distinguished from ladybug eggs because of their sporadic appearance.

A tiny yellowish-white egg is the first stage in the cabbage worm life cycle. The undersides of brassica leaves are visited by a female white cabbage butterfly, which lays up to 200 eggs. The eggs produce tiny green caterpillars after seven days. After 15 days, the cabbage worms have progressed through five stages and are 1.2 inches (3 cm) long.

A chrysalis 0.8 inches (2 cm) long is used by cabbage worms to pupate. The larvae have yellowish markings and are covered in a mottled gray or green color. Cabbage worm pupates for approximately 11 days throughout the summer. The cabbage butterfly emerges the following spring after a cabbage worm pupates in the autumn and overwinters in the pupa. 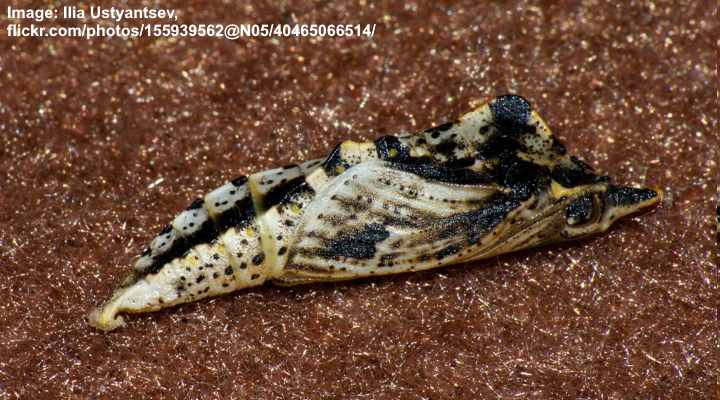 Cabbage worm larvae take three to six weeks to complete their life cycle. There are two or three to eight generations per year, depending on the climate. During the summer, cabbage worms and little whites are active.

How to Get Rid of Cabbage Worms in Your Garden?

A multi-method approach for controlling and preventing cabbage worms is required. It is a good idea to check cabbage plants for eggs, manually remove green cabbage worms and loopers, and employ natural insecticide sprays. Beneficial insects that attack cabbage worm larvae can also help to lower cabbage worm populations. Let’s take a closer look at some of the most effective ways to get rid of cabbage worms in your garden.

Get Rid of Cabbage Worms Manually

Green worms can be removed from cabbage plants by handpicking them. Yet, tiny yellow cabbage worm eggs should be checked carefully on the undersides of leaves. Drop the crawling green worms in soapy water to kill them. Squeeze the eggs between your fingers to kill them.

Inspect your brassica vegetable leaves once or twice a week, looking for signs of worm or aphid infestation. Little green worms that move or crawl in a looping manner are to be found. After that, simply grab the caterpillar off the leaves and put it in a tub of soap water to permanently die.

You’ll have to look hard for cabbage worms and loopers because they match the appearance of leafy green foliage. Remember that little whites, which lay eggs throughout the year, are active. Also look for white or yellowish specks adhering to the undersides of leaves. You may remove the eggs before they hatch and damage by wiping the leaves clean with a damp cloth if you feel squeamish.

Cabbage worms are attacked by beneficial insects that feed on them, and you may benefit from these insect predators. Before pupating, a variety of bugs, beetles, spiders, wasps, parasitoid flies, and birds attack the green worms. As a result, this cabbage worm control strategy is advantageous when used in conjunction with other eradication techniques.

Without pesticides, beneficial insects may help to control cabbage worms in a variety of ways:

Parasitic wasps On or inside cabbage worm larvae and pupae, lay eggs. The green worms are killed before they can do any more harm to plants when the wasp larvae hatch and begin eating them. Furthermore, cabbage worm eggs are consumed by Trichogramma wasps, which prevents them from hatching.

Vespid wasps Feed on the wriggling green worms that you attack.

It’s worth remembering that a few holes in cabbage leaves aren’t a cause for concern. Cabbage worms shouldn’t cause too much damage to your veggies as long as you keep them under control.

Bacillus Thuringiensis (Bt) to Get Rid of Cabbage Worms Organically

Without the use of harmful insecticides, Bt is effective against cabbage worms. Injections of the bacteria Bt may help exterminate immature larvae. Every seven days in the evening, apply the Bt spray to all areas of the plant, making sure to cover all sections. Bacterial thuringiensis is a bacterium that is deadly to butterfly and moth larvae found in the soil.

On the other hand, Bt is non-toxic and does not contaminate the food chain. Cabbage worm spray is available in pre-mixed formulas or concentrate, which you mix with water to dilute.

Bt is effective against Pieris rapae, according to a research on organic cabbage worm control. Bt, on the other hand, was shown to be more effective at pest control when it was combined with parasitic wasps called Trichogramma brassicas.

As a result, the study recommends that Bt+Trichogramma be used for the management of Pieris rapae in organic cabbage. This ensures that the organic control technique will not be affected by sunlight.

Before they cause too much damage, a neem oil spray may help kill cabbage worm larvae. Mix 2 tsp. of neem oil with water to make a solution. 1 tsp. of natural neem oil A spray bottle holds a quart (1 liter) of water and Castile soap. To exterminate cabbage worms, apply neem oil spray once a week.

The active ingredient azadirachtin, which is a natural pesticide, is found in neem oil, which comes from the neem tree. Since it interferes with feeding and reproduction, neem oil is effective against cabbage worms. Other kinds of garden and houseplant pests may also be controlled with neem oil.

Neem oil was found to be effective in controlling cabbage worms in a research into its efficacy as a natural insecticide. Pieris rapae larvae, including adult caterpillars, were inhibited by a neem oil spray in several instars. In addition, after pupation, cabbage larvae treated with neem oil died.

When used in conjunction with other pest management tactics, neem oil is solely effective against cabbage worms. As a result, regular cabbage looper and worm checks on brassica plants are required.

If you utilize organic farming techniques, Spinosad spray is a safe and nontoxic way to kill cabbage worms. Spinosad is a natural insecticide that works by killing off larvae. For spraying on caterpillars and insect eggs before they hatch, Spinosad products are usually ready to use. It’s important to keep in mind that Spinosad sprays harm beneficial insects. As a result, when pollinators are active, it’s best to avoid using the spray.

It is critical to prevent small whites from laying eggs on cabbage plants in order to eliminate cabbage worms from your cruciferous and brassica plants. Cabbages, broccoli, kale, and other cruciferous vegetables resistant to cabbage worms should also be planted.

One of the best ways to prevent cabbage worms from damaging your crops is by covering your plants with insecticide. Cabbage whites are prevented from laying eggs on plants by floating row coverings. Moreover, the covers protect the plants from butterflies and other insects that eat plant leaves.

Row covers, like other veggies, have the drawback of not allowing pollinators in. Plants in the Brassicaceae family, on the other hand, do not require pollination to grow their leafy greens. In the early season, you may cover young cabbage plants with paper cups. You may then cover the floating row covers over the kale, broccoli, cabbage, and Brussels sprouts as they grow larger.

Cabbage worms can be avoided by using proper planting methods. For instance, you might experiment with polyculture by cultivating a variety of plants in a single vegetable plot or raised bed. You can also prevent the larvae from infesting your plants by using companion planting plants that deter cabbage worm butterflies.

You may diversify your vegetable garden by combining a variety of vegetables in polyculture. You might include root vegetables, bulbous plants, and leafy greens in addition to cabbage or broccoli, for example. This approach of planting helps to prevent plant diseases and is a natural pest management tactic.

Adult cabbage worm butterflies are supposed to be repelled by certain plants. Thus, you may grow onions, garlic, oregano, dill, and marigolds in addition to brassica plants to discourage many adult butterflies from laying eggs on foliage.

Cabbage worm-resistant varieties of brassica and cabbage plants. Imported cabbage worms have little impact on some cabbage cultivars. Brassica plants with dark green, purple, or lustrous foliage are also known to discourage cabbage butterflies. Some cabbage plants have dark pigments that are distasteful to larvae, and larvae prefer not to feed on them.

Cabbage worms favor collards, cabbage, broccoli, and cauliflowers, according to the University of Florida. Brassica vegetables like as turnips, Chinese cabbage, kale, and mustard greens are often avoided by them.