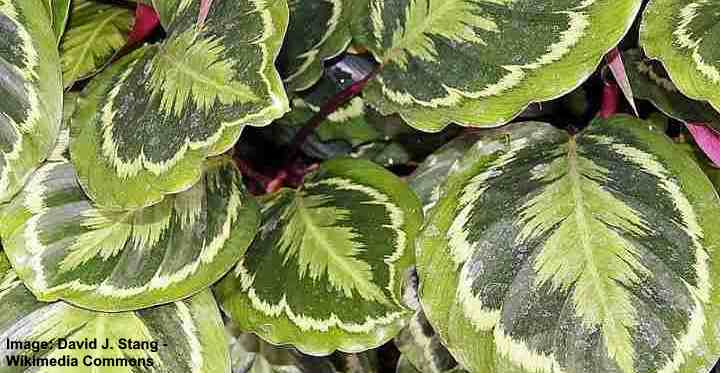 Calathea Medallion is a popular houseplant that requires little care. The lovely large oval green leaves with purple undersides of this calathea variety are the feature. The Medallion calathea plant’s colorful leaves may enhance the look of any environment, including rooms, offices, and other indoor spaces. Despite the fact that calatheas are tropical, evergreen plants that need little care, they flourish indoors.

How to care for calathea medallion: Water the plant sufficiently so that the soil is moist and grow the calathea in well-draining potting soil. The plant thrives in moderate light, with high humidity of 50%, and typical room temperatures of 65°F to 80°F (18°C to 27°). It does best when not exposed to direct sunlight. During the growing season, spray a diluted liquid houseplant fertilizer on the plants monthly.

What is Calathea ‘Medallion’? 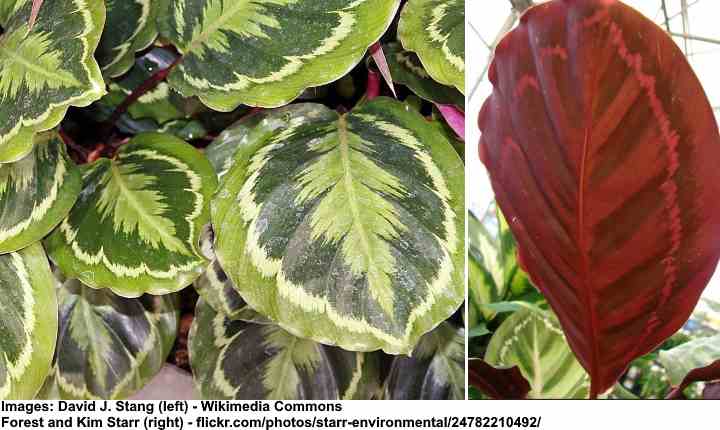 The tropical plant Calathea roseopicta ‘medallion’ belongs to the Marantaceae family. Calatheas are therefore connected to prayer plants (Marantas). Since they raise their leaves at night like prayer plants, calatheas are sometimes referred to as prayer plants. Calathea plant leaves fold upright at the base of the stem in the evening, as if the plant is folding its leaves upward to pray. Nyctinasty is the term for this process.

Calathea species and cultivars abound, with several examples. The pinstripe plant (Calathea ornata), rattlesnake plant (Calathea lancifolia), and zebra plant (Calathea zebrina) are some of the most popular types of calathea. Curling leaves, brown leaves, and wilting leaves are all common calathea medallion care issues. Answers to questions about caring for this tropical indoor plant can be found at the end of the article. 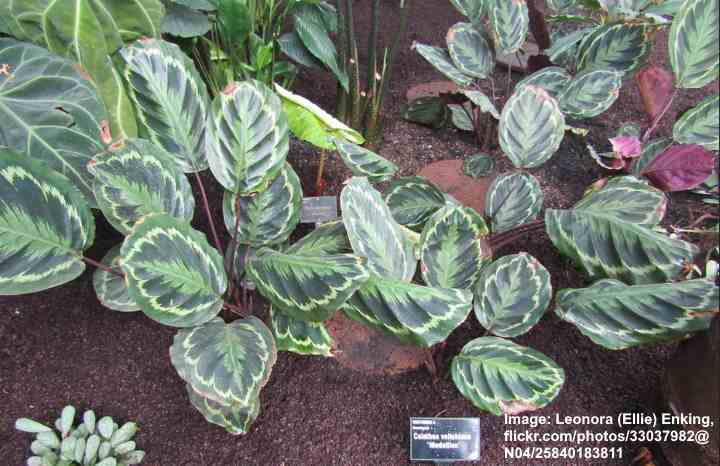 When it comes to caring for Calathea medallion plants, they are not fussy houseplants. To survive, the plant must meet three basic requirements:

Let’s take a closer look at how to care for a calathea medallion.

Plants from the Calathea medallion family, which are native to tropical woods, thrive in medium to low light. The plant should be kept out of the sun as much as possible. Leaf burn is another potential problem. Calatheas thrive in low-light situations, but in moderate to bright light, they thrive even more.

Calathea prefers bright, windowsill areas at home. The variegated plants’ markings and patterns on their leaves need sufficient sunlight to stay vivid. You may, however, position the tropical plant in a north-facing chamber or shaded area where it will flourish.

How to Water a Calathea Medallion

When the top 1″ (2.5 cm) of the potting mix has dried, water a calathea medallion. After the soil has partially dried, thorough watering nourishes roots without making it too soggy. Make sure that water runs out the bottom when watering a calathea. It’s a good idea to avoid watering the plant.

Watering houseplants on a schedule is a common mistake, particularly calatheas. Root rot, fungus gnats, and a slew of other problems are all caused by watering too much before the soil has somewhat dried. Before watering, test the moisture level in the potting mix. If your plant is in a dry environment, thoroughly water it. If there is still moisture in the potting soil, do not water until it is completely dry.

It’s preferable to underwater than above-water with calatheas such as the zebra plant, rattlesnake plant, and medallion plant. Therefore, when watering your tropical houseplants, err on the side of caution and avoid over-watering. watering a calathea medallion is a little more complicated than you may think:

The Best Soil for Calathea Medallion

Charcoal, coco coir, and orchid bark are some of the other components used to make a suitable potting medium. A high-quality African violet mixture is recommended if you want to buy a commercially available soil. The land should be rich, absorbent, and drains well. To help improve soil quality, there are just a few additional things to consider. To help a calathea medallion survive, follow these care guidelines:

Calathea medallion plants prefer a temperature range of 65°F to 80°F (18° – 27°C). Your houseplants can flourish in the average room temperature. It’s important to maintain a consistent temperature in the room. As a result, to avoid stressing the beautiful houseplants, it is necessary to keep plants away from scorching sunlight, radiators, or air conditioning.

Temperature fluctuations may be harmful to Calathea medallion plants. Their leaves will start to curl if the temperature becomes too high. Cold drafts scare the plants, causing their leaves to droop or wilt.

Calatheas have a minimum temperature of 55°F (12°C). If the plant is allowed to develop in cold temperatures, it may sustain long-term harm and perish. Therefore, when the nighttime temperature drops to 60°F (15°C), bring your calatheas inside if you grow them in pots outdoors during the summer.

When growing a calathea on a balcony, porch, or deck area, remember to keep it in mind that the light requirements are different than for indoors. Place in a spot that is well-lit but shielded from direct sunlight. Your yard’s best location is one that faces east or west. Make sure that the calathea receives only dappled or filtered sunlight between 11 a.m. and 4 p.m., if it’s in a south-facing position. And then, at 3 p.m., I’ll be there.

When growing calathea plants indoors, keep humidity levels high. Misting the leaves, using a room humidifier, or placing on a pebble water tray will help humidify the air around your plant. You may also arrange houseplants so that they create enough humidity.

For moisture-loving tropical plants, household air is usually too dry. Because of heating, it may be difficult to maintain humidity levels in the winter. Room air can also get dry quickly in hot summers. The medallion plant leaves will not curl or droop if there is enough humidity.

To ensure high humidity for your calathea medallion, follow these best care tips:

Caring for Calathea Medallion—How to Fertilize the Plant

During the growing season, feed your calathea medallion plant every four weeks, starting in early spring and ending in late summer. Dilute a balanced houseplant fertilizer to one-fourth strength before using it. Your calathea plants may become leggy, get root burn, or die if you overfertilize them. It’s crucial to keep in mind that during the winter, your houseplants don’t need to be fertilized.

When growing calathea medallion at home, it’s a good idea to flush the soil from time to time throughout the winter months. A build up of mineral salts is common in plants growing in pots. Excess fertilizer can build up even if you feed your plant correctly. Flush the soil in this manner to keep your plant healthy:

Wait until the potting mix has dried somewhat before watering after flushing the soil. After a few weeks, resume normal plant feeding.

Calathea medallions should only be repotted once a year, and they hardly ever need repotting. Calathea may take two years or longer to thrive in the same pot. Refresh the potting mix, give roots more room to grow, and address any soil fungus problems by replanting a calathea in the spring.

Pinstripe plants, rose-painted calatheas, zebra plants, and medallion plants are some of the best candidates for repotting during the growing season.

How to repot a calathea medallion:

Wash the container with soap water and trim the roots by one-third if you are repotting in the same pot. This method allows calathea roots to grow without crowding and prevents the plant from growing too big.

Calathea medallion plants are a forgiving houseplant that seldom needs trimming. There isn’t much to trim since the huge oval leaves develop on a single stem. Removing brown or yellow leaves is the only time you’ll need to trim your plant. All you have to do is sever the unsightly leaf stem that connects to the main stem. Before using, sterilize your scissors, knife, or pruning shears by cutting through meat.

How to Propagate Calathea Medallion

The roots of Calathea medallion are divided early in the growing season, which is known as rhizomes. It’s extremely tough and often futile to grow propagating medallion plants by seeds or cuttings. Attempt to grow a well-established, healthy calathea, however. They don’t like being disturbed, despite being easy houseplants to care for.

How to propagate a calathea medallion by rhizome division:

The number is zero, not one. Humans, dogs, cats, and other house pets will be safe around Calathea medallion plants.

The wild blooming Calathea medallion is a tropical plant that flowers. Indoor plants, on the other hand, never bloom. However, there is no need for blooms to make this houseplant attractive because of its stunning emerald green, silvery, and purple foliage.

We’ll explore how to address common challenges that medallion plant growers face in this section.

How to get rid of pests infesting calathea medallions

Fungus gnats are attracted to damp soil, while thrips, aphids, and other pests are drawn to the huge leaves. Only water the plant until the top layer of soil has dried to get rid of these insects. Read our article on how to get rid of bugs on houseplants if you notice signs of houseplant pests such as aphids, thrips, mealybugs, or spider mites.

Moisture and watering issues are the most common fungal problems that afflict calatheas. Scrape off any indications of white mold found on plant soil. Wait until the top 1″ to 2″ (2.5 – 5 cm) of the potting mixture dries before watering your plant. To avoid fungal problems, only water the soil when it has partially dried.

Why are calathea medallion leaves yellow?

Calathea medallion leaves turning yellow is most often caused by over-watering. Don’t water the plant until it has mostly dried out if the soil is excessively wet. Under-watering, pest infestation, or exposure to a cold draft might all cause yellowing leaves.

A thrip infestation is one of the reasons why calathea leaves turn brow. Look for little black creatures that crawl beneath the leaves or stems. To get rid of them, apply neem oil treatment.

Why does calathea leaves have brown edges?

Moisture issues cause the brown edges on the large calathea leaves. If the soil is totally dried, for instance, the leaf margins will brown. Unsightly brown margins on calathea leaves can be caused by poor humidity, cold air, or misting with unfiltered tap water.

Why do calathea medallion leaves curl up?

A thirsty calathea will have curling leaves. Leaves may roll up into a tubular shape if they aren’t watered enough or have poor humidity. To revive a wilting plant, give your plant a deep watering and spray the leaves with distilled or filtered tap water.

My calathea leaves are dying—what should I do?

Drooping leaves, yellowing or browning leaves, poor growth, or curling leaves are all indications that a calathea is dying. Eliminating the root cause is the only way to resurrect a dying calathea. Therefore, look for indications of pests, maintain a consistent watering schedule, and spray often to raise humidity. To refresh the potting mix and get rid of wet, soggy soil, you may need to repot a calathea. Your calathea may also appear to be dying due to low light.

Why do calathea leaves have brown spots?

A pest infestation or excessively dry air could cause brown spots on calathea medallion leaves. Make sure that the room has enough humidity as well as adequate airflow. In order to eliminate bugs on houseplants, such as neem oil spray to eliminate indoor plant pests, you may apply natural ways to kill bugs on your plant.