In North America, opossums are the only marsupials. Their young grow outside a womb inside a placenta, similar to other marsupials, rather than inside an uterus.

They’re omnivores that can eat anything they want. They can, however, become bothersome creatures in urban areas or even in communities where they forage through trash bins if they have successfully adapted to human environments.

Opossums are sluggish walkers with impaired vision, and this is why they are frequently run over by automobiles despite their adaptability. Nonetheless, while going through trash, they may annoy animals and create a ruckus outside. In your porch, basement, attic, or crawl spaces, they may become a pest problem.

The nose to the tip of the opossum’s tail is around 21 to 36 inches long. They resemble a cat or a small dog in terms of size. Their pointed head and pink nose, as well as their long, hairless tail and pointy ears, are some of their more distinguishing features. There are 50 tiny, pointed teeth in their mouths. On their hind feet, they have opposable thumbs. 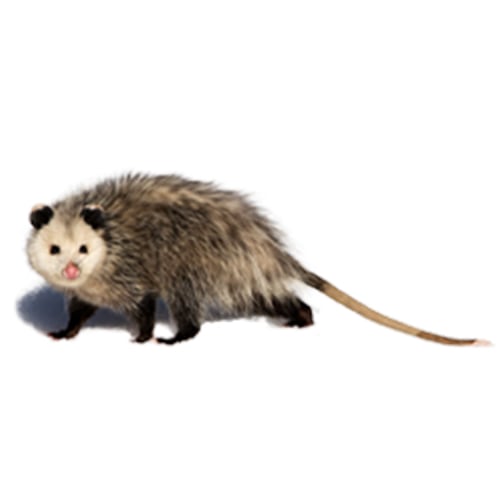 The only opossum species indigenous to America, the Virginia Opossum, is also the only one that causes harm in the United States. 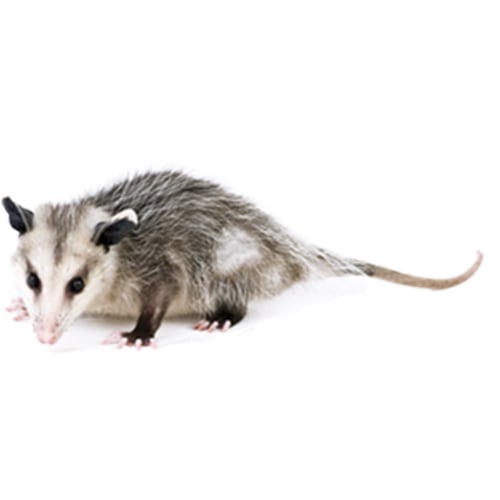 The Common Opossum (also known as the Southern Opossum) prefers habitats near water like tropical forests, but will also be found close to people in urban areas. 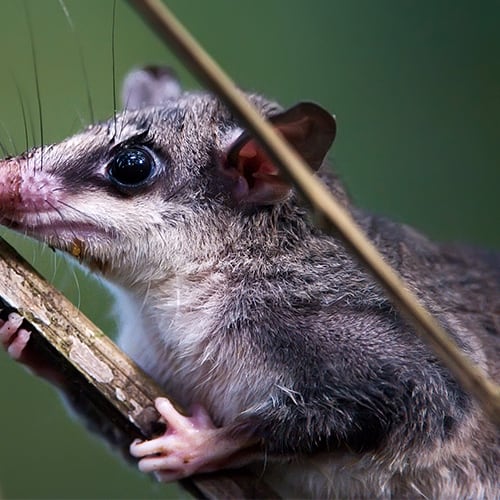 The gray short-tailed opossum is considered to be more aggressive than other species, especially when they are mating, because of its size and relatively small geography. 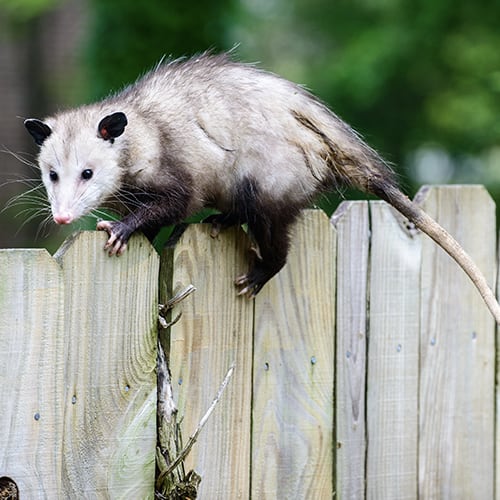 Can Opossums Transmit Diseases to People?

When opossums scratch and bite, they can transmit leptospirosis, coccidiosis, tularemia, tuberculosis, and toxoplasmosis. Humans are also at risk for these illnesses due to their contact with feces and urine. Steer clear of one, whether alive or not, because they are known to “play dead.

Why Are There Opossums On My Property?

Opossums will eat just about anything and are scavengers. They’ll gravitate toward uncovered compost heaps and other receptacles that you may have outside, as well as overflowing or stinking trash cans. They prefer damp or near-water habitats to creating their habitat. Opossums are more likely to be seen on your property if you live near a pond, drainage ditch, or sewage.

The signs of an opossum infestation will most likely be heard before you see them, due to their size and activity.

When opossums are seeking for food, they will scratch and make hissing and screaming noises. It’s time to conduct a full inspection if you’ve additionally seen property damage and indications that your trash has been examined through, to ensure that opossums are the bug you’re dealing with. 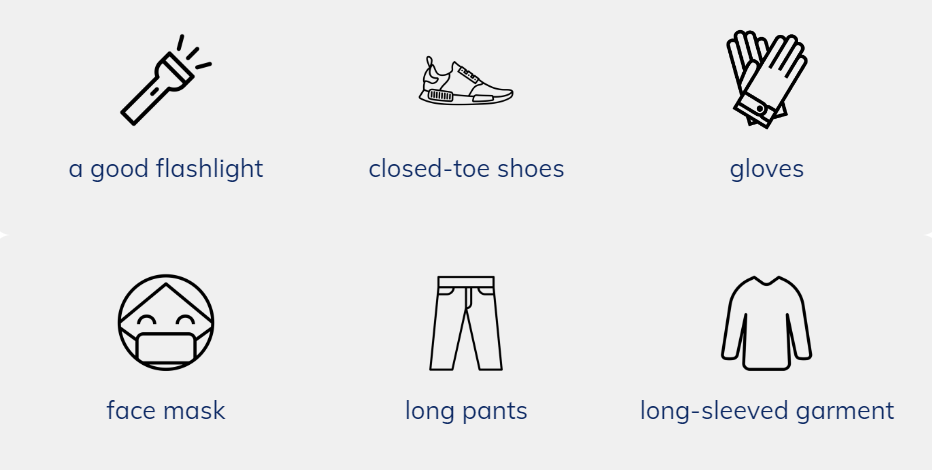 Step 1: Survey Your Property for Damage 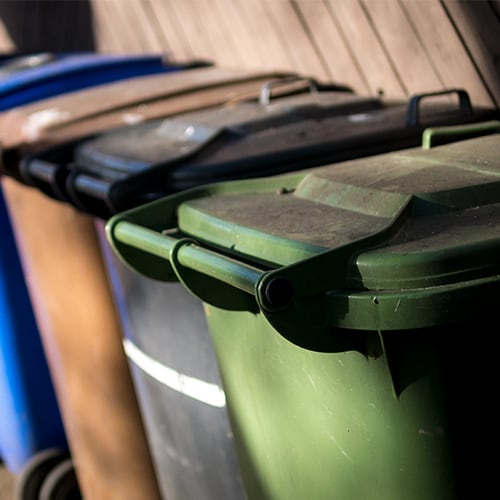 Walk around your property looking for any signs of opossums with the above clothing precautions in mind. First, check your trash bins to see if anything appears to be amiss or if anything has been removed. This would most likely be the source of the food they receive from your land if this is the case. Next, check for scratching on your home’s exterior. These are indications that the opossum is looking for a means to enter and eat more foods. Also keep an eye out for cat droppings, which may be as big as a grapefruit. 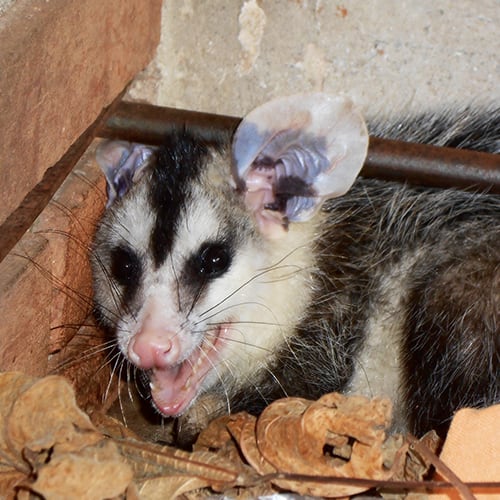 There is likely an opossum nest nearby if you’ve seen property damage occurring over and over again. Look under hollow logs, brush, holes, and cracks around your house with a flashlight to check for pests. Opossums, on the other hand, typically bring nesting materials into a safe, already-covered area even if they do not build a nest of their own. Check carefully to see if they have relocated their nest if you’ve heard noises in your attic. 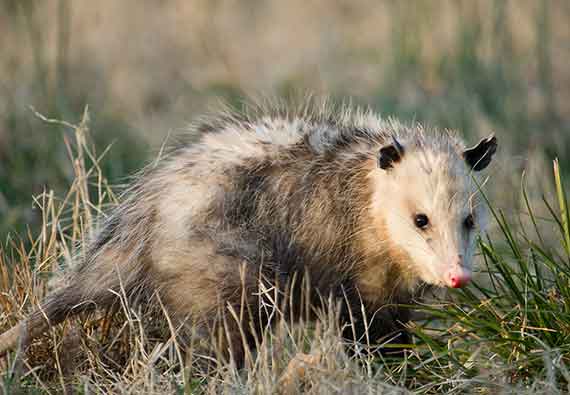 An opossum approaching food at night is easy to see if all else fails. You might experiment by strategically placing food near a window in the hopes that an animal will come. This will allow you to distinguish between an opossum and another kind of foraging animal like a raccoon with certainty. 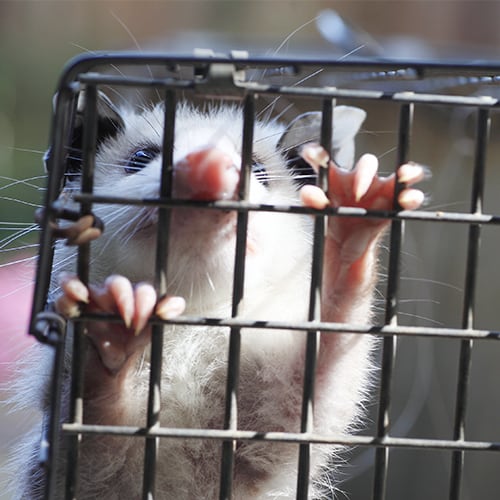 Knowing that you have an opossum problem on your land will enable you to craft a customized and effective solution plan. A multi-pronged strategy will be used to eliminate them, including trapping, repellents, poisons, and other approaches. This will include a multi-pronged approach to releasing their trash and food. If you want to get rid of the issue as quickly and effectively as possible, you may want to contact a professional animal removal company.

Your first move is to remedy an opossum issue if you already have one. Remove all opossum-attracting objects from your property before sanitizing it.

Food supplies and hiding spaces, such as beneath logs, may be promptly shut off or removed. You may need to take further steps toward warding off opossums and preventing future infestations for other attractants such as gardens or the intimate crawl spaces beneath your home. 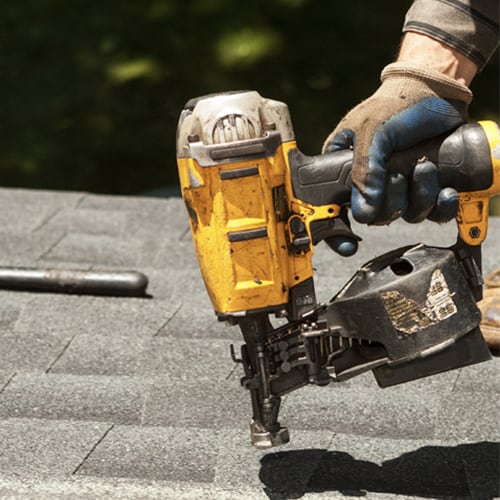 Opossums are always on the lookout for excellent concealment spots where they may rest and stay away from predators since they don’t build their own nests. This may be a headache if an opossum has set up camp so close to your house, since your attic, basement, and crawl spaces all provide ideal locations for this. Make certain that all of the openings in these zones are blocked off. 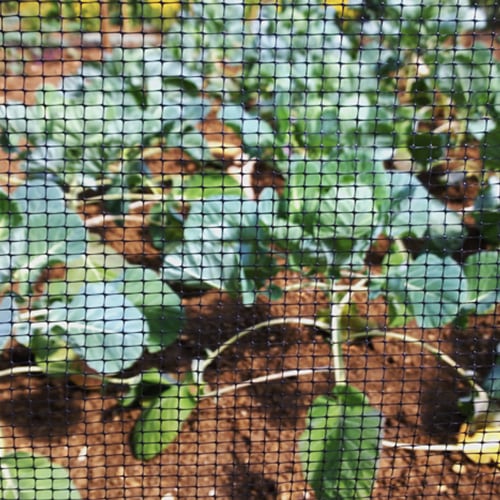 You can install a screen or mesh fence along the edge of your yard, or just around the vegetation that opossums are eating, if opossums are devouring plants in your garden. Other animals, such as squirrels, voles, and chipmunks will be kept out by this.

For keeping opossums away, fencing your entire property is an extremely effective method. Since opossums don’t usually dig, privacy fences might be used to deter them from digging. Make sure there aren’t any holes or cracks that they may crawl through, though. Other animals will be kept out by properly built fences, which will save you money in pest control in the long term. 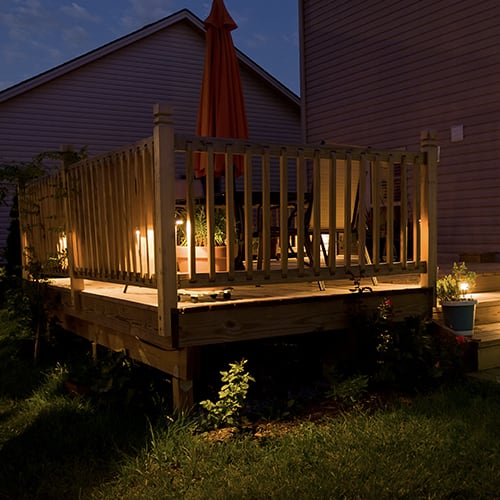 Making your property less appealing to opossums to come scavenge for food is one method of keeping them away. Unfortunately, if you don’t employ other techniques in conjunction with these, opossums will forget that they were previously frightened away from your yard and may return.

Motion-activated devices, such as outdoor lights and sprinklers, can deter a wide range of intruders and are often cost-effective. The lights or sprinklers will activate and startling the opossums, forcing them to flee whenever they approach your yard.

Sonic repellents come in a variety of shapes and sizes, with the option of either burying them or putting them up near your home. Opossums will be driven away by a high-frequency noise or a sonic vibration. A motion sensor is frequently included with these products. If you have outdoor pests, this strategy isn’t recommended since you might frighten your own cat or dog while they’re out.

Opossums can make a huge mess in yards, despite their poor eyesight and sluggish pace. They have a foul smell with their feces and urine, and are known for eating practically anything.

It is essential to address any opossum problem immediately since they may transmit a variety of illnesses to people and animals.

Thankfully, there are numerous ways to get rid of opossums on your property and keep them from returning, including treatments and prevention measures. You may do this yourself, or a professional wildlife specialist may assist you with it to save time and effort.

Trash that has been tampered with, scratch marks on trash cans, droppings, foul odors, and disappearing pet food (if you keep any outside) are all signs of opossums on your property. You may employ certain particular and targeted opossum treatment procedures to stop them in their tracks and keep others from coming onto your property once you know you have opossums in your yard. 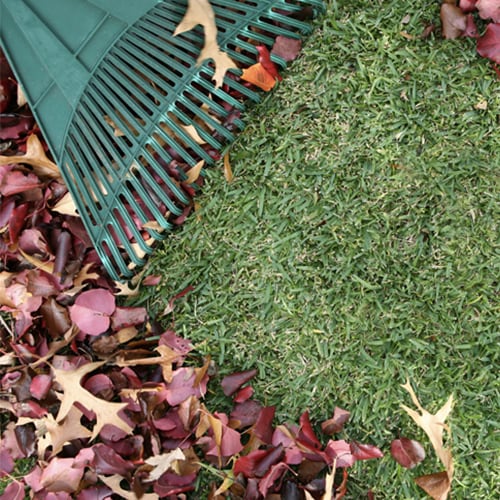 If you haven’t taken care of everything that attracts opossums to your yard, removing them may be pointless. Otherwise, if you have opossums on your property, they may come back again and you’ll be dealing with the same issue. 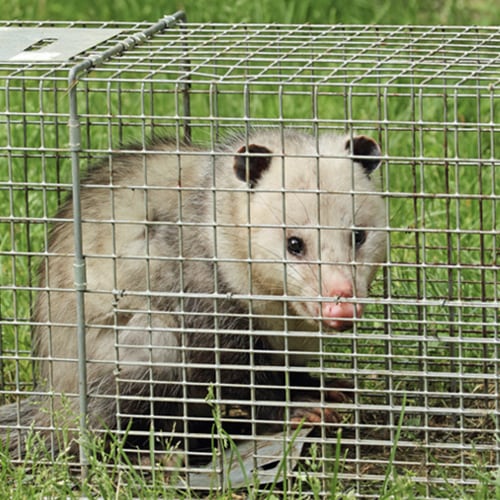 The best way to get opossums off your property is with a trap. Trapping might be the quickest way to eliminate them if it is done in conjunction with other methods of prevention and repellent.

How To Use a Live Opossum Trap

After you buy a live trap, make sure to study the instructions thoroughly before using it. Traps come in a range of sizes, with spring-loaded or one-way doors being the most common types.

Place the trap near food sources (typically near your trash cans or garden) or near any nesting place you may locate at night, whichever is closer. Since opossums are nocturnal and you don’t want to catch diurnal animals, only leave the traps out at night.

Place bait inside the trap to tempting animals. While trying to entice opossums while avoiding attracting additional species to the trap, this can be a trial-and-error process. Dog or cat food, fish, meat, and fruits are some of the bait ideas available.

Grasses, leaves, and twigs should be used to camouflage the trap. By becoming the sort of hollow shelter they prefer to hide inside, this will make the trap even more appealing.

When the trap is in operation, keep your outdoor animals away. Keeping them contained the whole time, rather than risking trapping and maybe injuring them, is especially important if your bait is pet food.

Before you remove it to set it free, check your state’s laws on opossum trapping. There may be limits on where you can discharge them, or your state might provide valuable advice on the finest regions to do so. 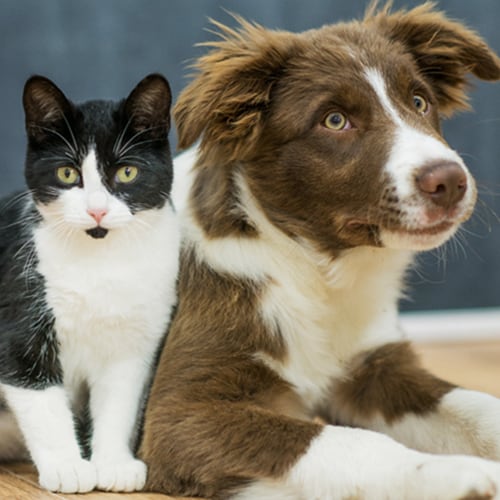 You may use repellents to help prevent any additional opossums from entering your home after you have physically removed the first one. 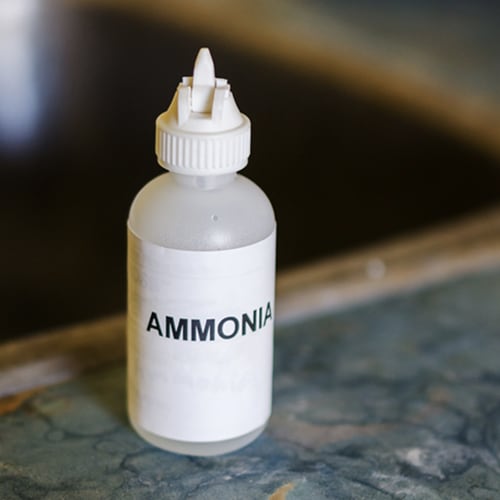 There are several helpful natural products you may have around the home that aren’t recommended to make your own opossum trap or try to create your own scare tactic. Since you won’t likely come into touch with the opossums, your own repellents may be just as good, and they’re not dangerous.

When To call a Prefessional

Many wildlife removal businesses offer assurances that their work will continue until the issue is fixed.

Trial and error may be involved in DIY techniques. Using tried-and-true techniques and top-of-the-line equipment, a wildlife control specialist will attempt to eliminate and prevent the problem. Since the professional will most likely use one approach rather than a collection of items to resolve the problem, this may conserve you money. In addition, many wildlife removal firms offer protection that they will continue to treat the issue until it is fixed.