Voles are tiny mammals that may be found both above and beneath the earth. Even though adult voles are only five to seven inches long, they can upend a yard by eating vegetation and kicking up dirt, roots, and grass.

Voles pose their own distinct pest concerns, much as moles, shrews, and mice. Moles, on the other hand, are mostly subterranean creatures, and shrews and mice don’t dig as much or do as much tunneling, burrows, or runways. Because they look so much like mice, voles can be hard to differentiate. Meadow mice or field mice are two names for these animals. However, it’s crucial to differentiate voles from true mice if they’re creating a issue on your property.

Voles have a few additional identifying traits to think about in addition to their tiny facial features, short tails, and small snouts. Voles have a stocky, rounded, and potato-like physique. It has a darker belly and its short hair is usually brown to black. Voles have tiny feet and claws, similar to other rodents. They can also gnaw on vegetation and bark thanks to their tiny, but pointed teeth. 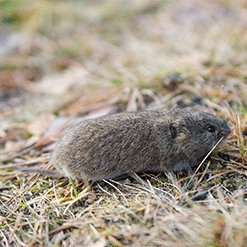 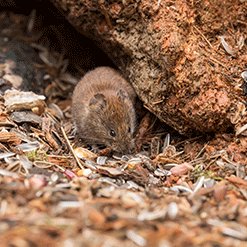 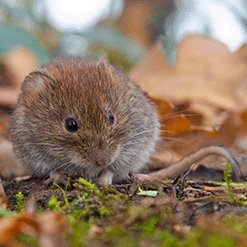 Differences Between Voles and Mice

Can Voles Transmit Diseases to People?

Rabies, Hantavirus, and Korean hemorrhagic fever are just a few of the diseases that voles have been known to carry. Because of this, keeping a safe distance from them in your yard is especially important. If you’re working near their runways, make sure to wear closed-toe shoes and gloves since their feces and urine can carry viruses.

Because voles look like other animals and cause a lot of the same damage, inspecting for them may be challenging.

Help you determine the exact species you’re dealing with by educating yourself about voles and remaining patient throughout the inspection process. You may build a focused plan to stop future harm and remove them from your property altogether once you have all of the information you need.

Prevention measures are critical to employ in both situations, whether or not you already have a vole problem.

These ways will not only help repel voles, but they’ll also keep them out, stop them from coming back, and protect your property from other pests and wildlife. 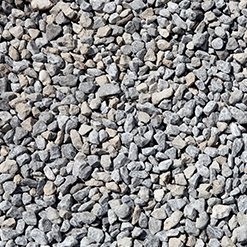 Voles will most likely turn around and head toward softer soil that is more conducive to digging by mixing gravel into some of the dirt in your lawn. 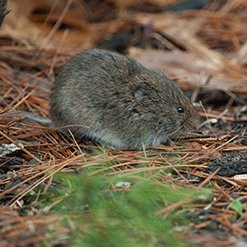 Voles are the same size as other rodents, such as mice and rats, and are just as likely to enter your home. Rodent infestation in close proximity to you may cause a range of hazards, including sickness and risk to your pets or children. As a result, preventing an indoor invasion is critical, and it should not be overlooked. 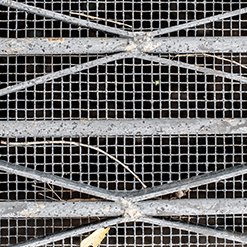 The entrance of your chimney, the exposed portions of your crawl space, and any vents along the side of your house may all be used by voles and other pests to enter your house. You may purchase screen or coverings that fit over the tops and keep out insects while still allowing for the original purpose of the entrance (e.g., Ventilation and temperature regulation are necessary for good health.

Voles may cause pest control issues of their own outside while mice infest homes. These little nuisances use shallow runways on the ground’s surface to travel around and dig out small runways.

When voles rip through your plants’ roots and runways create unsightly grooves throughout your yard, this may harm your plants. Voles devour aboveground vegetation, nuts and seeds, leaving gardens barren and causing scrape marks on trees and limbs.

There are several easy treatment and prevention methods you can use yourself or hire a pest control professional to do for you if you’d want to remedy voles damage in your yard and prevent others from coming back.

If you notice obvious runways on the surface of your ground, damaged grass, and tiny gnaw marks, you know you have voles in your yard. Voles’ runways will never be bigger than 3″ and they will never tunnel, when compared to other ground-dwelling species that cause damage. Voles, on the other hand, burrow, so you may observe tiny holes where they have built entrances to their nests.

Voles are tiny creatures with hairy tails and a coloration that ranges from brown to grey or black, similar to mice. Voles, on the other hand, have shorter eyes, ears, and tails. A more targeted treatment regimen will result from successfully identifying voles and evidence of their damage.

Remedying the problem at hand is your first step in reducing a vole infestation. Others may be drawn to your yard if you concentrate on eradicating the voles first. The cycle may begin again from scratch. Before embarking on strategies for eradication, it is essential to concentrate on cleaning up your yard. 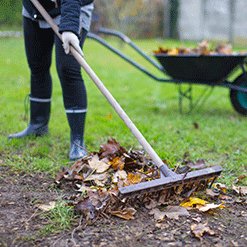 Voles prefer to dine on the ground, where they can hide from predators in a thick layer of vegetation. Trim back shrubs and trees in your yard, rake up leaves, branches, and brush on a regular basis. Voles like it when there’s a nice mound of mulch leading up to a tree or plant for the same reason. Leave a generous amount of space between the mulch and any of your plants or trees if you mulch in your yard. 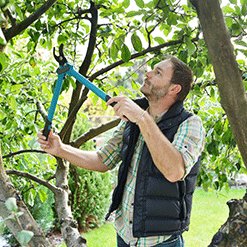 Voles have an easy time digging through thin dirt. While sustaining vegetation development is critical, a few minor steps may help you avoid watering your yard more than it needs: 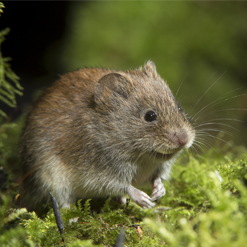 You may easily use mousetraps since voles are the same size, despite the fact that some traps on the market are designed specifically for voles. Spring traps, which attach to the vole when they are activated, or glue traps, which make the vole get glued to the trap until it dies or is freed, are frequently used in this manner. Live traps that work with one-way or spring-loaded doors are also available for purchase.

How to Use a Trap for Voles or Mice

Read all of the instructions for the gadget you’ve selected carefully. These can be harmful if you mistakenly snap it onto your fingers, particularly when it comes to spring-loaded traps. Detailed instructions and tips for usage should be included with each trap.

Place the trap in high-traffic areas where it will capture a lot of attention. You can look inside vole runways to see which parts seem heavily used because they are open-faced. There will be more vole droppings in these areas, which will be somewhat deeper or wider.

Next, drop some bait into the trap. You may try pieces of fruit covered in peanut butter or even a piece of the vegetation they’ve been feeding on as voles are herbivores that enjoy a wide range of different plants, seeds, and nuts.

Keep your children and pets away from the area while setting the trap and waiting for it to be used. Outdoor pets, in particular, are likely to be drawn to the vole bait you have placed.

Regardless of whether you have a kill trap or not, check the trap every day for a vole. You’ll want to remove the carcass as soon as possible after setting the trap, since it is meant to kill voles. Yet, before it dehydrates and dies, you’ll want to release a vole from a live trap as soon as possible. Always wear gloves when handling a live or dead vole to avoid illness transmission, whether you’re dealing with a live or dead vole.

Vole trapping and where you can release them may be regulated by specific state laws, so it’s a good idea to check first. Voles should be released at least five miles from residential property, according to a rule of thumb.

Poisons may require more effort than many people imagine, but they are known to effectively reduce vole populations. It’s critically important to keep young children and pets away from the drug. Even if it rains and the poison is washed away, you’ll need to use it in an area where it won’t harm your plants. You can use vole poison or ones meant for rats or mice, much like you would trap voles.

Before using any kind of wildlife poison, read the Directions thoroughly. Even after a vole has been eaten, some may take up to a week to affect it. Since this, it’s crucial to regularly check the poison and the vole runways and surroundings for any dead voles. Leaving a vole corpse in your yard might attract additional creatures and create even bigger complications.

During the winter and autumn, poisons are more likely to take the bait since their typical food sources aren’t as plentiful. To avoid illness transmission, always use gloves while removing dead voles.

Store-bought repellents include castor oil with a blend of other chemicals that repel voles by their odor and flavor. They are available in granule or spray form. Apply repellents near burrow entrances and around vegetation from which you want to keep the voles at bay. Apply them directly within vole runways. How often and how long you should use the product will be specified in the instructions.

Use repellents to prevent voles from returning either before you’ve spotted any voles or in conjunction with other treatments. They won’t be as successful when they’re used individually. 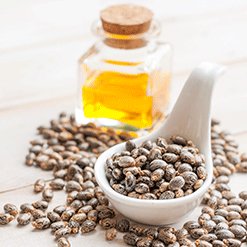 Since voles avoid this scent, castor oil is used in practically every store-bought product to repel them. Instead of purchasing a ready spray from a shop, you may save money by making your own batch of castor oil and mixing it into a spray solution. Make a gallon of water by combining a cup of castor oil and a cup of dish soap. Spray this mixture around the locations where voles may be found. 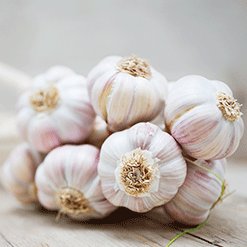 Garlic’s strong odor may help repel voles, similar to castor oil. You can drop crushed cloves near your vegetation and vole runways, or you may combine several minced garlic cloves in water to make a spray solution. 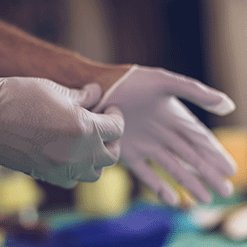 Instead of simply dumping ammonia onto runways, a container with a lid and a rag is more effective. Next, make a medium-sized cut in the top of the jar. Pour some ammonia into the container while wearing gloves. Stick the rag up through the aperture in the lid after soaking it in ammonia. Ammonia will disperse in the air instead of being washed away by rain, thanks to this method.

When To Call a Professional

Vole removal is usually started by a professional at the source. They’ll eliminate burrows as well as address the reasons voles are drawn to your yard in the first place. Many wildlife organizations also provide warranties, promising to either refund your money or keep sending until they are certain the problem has been fixed.