One of the most uncommon types of clouds that develops in our atmosphere is lenticular clouds. These clouds appear to be flying saucers because of their disk-like shape. Special radio waves move against natural obstacles to produce these formations.

Continue reading to learn more about cool lenticular clouds, how they form, and where to find them! 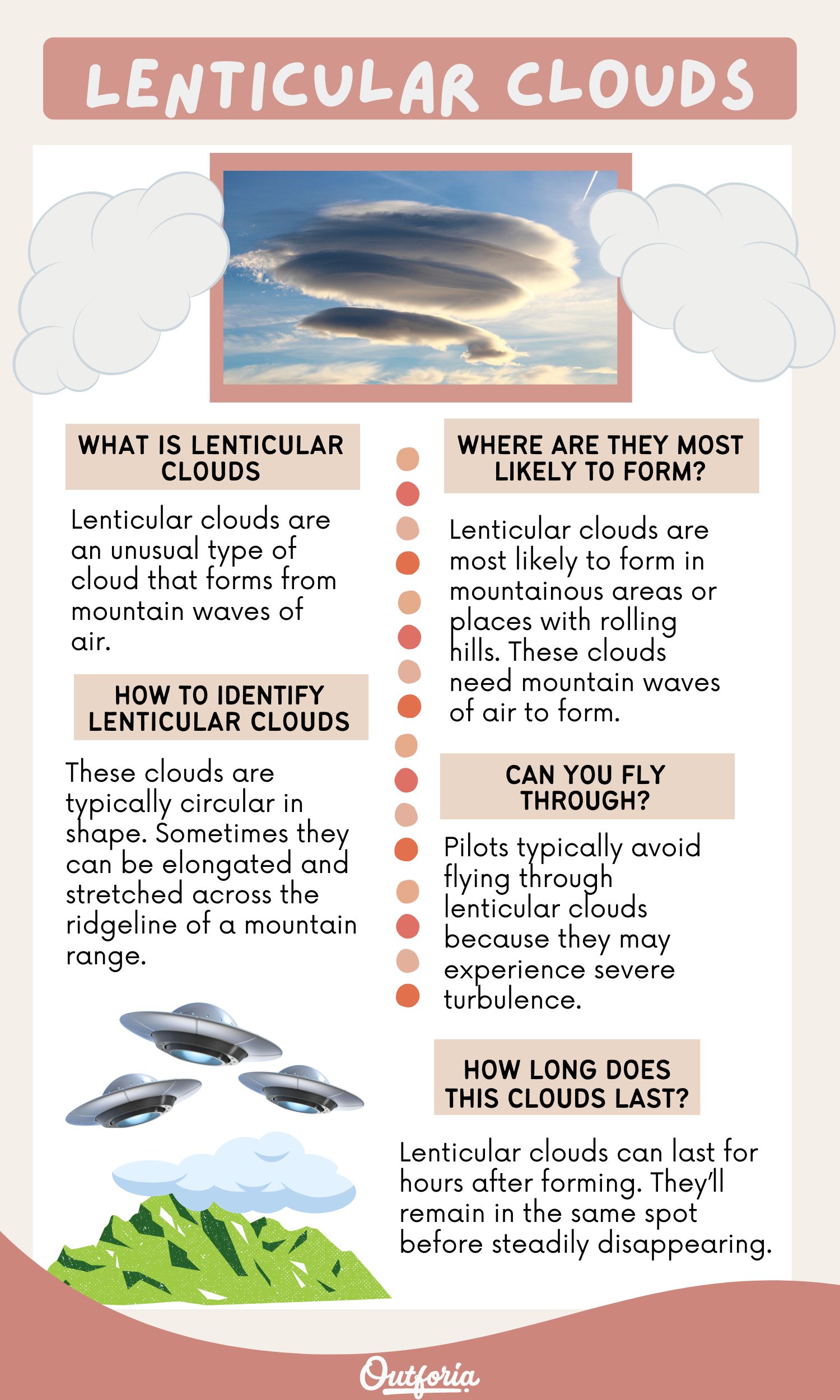 What are Lenticular Clouds?

Lenticular clouds are mountain air wave clouds that develop into an unique kind of cloud. The wind travels up the mountain’s windward slope and returns down its leeward slope. In the air, this generates a wave-like pattern.

We generally miss this occurrence because we can’t see the air. When, however, the atmosphere produces liquid water droplets and generates a cloud, we may observe this beautiful cloud development.

A stationary lenticular cloud is created by the air ripple effect moving up and down. It has a unique disk-like shape due to the way it is formed. Lenticular clouds are often described as floating above mountains or hills, looking like flying saucers.

Lenticular clouds get their name from the Latin word lenticularis. This is how lentil-shaped looks. The term became lenticular, which means lens-shaped, as a result of the transformation.

Where Are Lenticular Clouds Most Likely to Form?

In mountainous regions or locations with rolling hills, lenticular clouds are most likely to develop. Mountain air waves are required for these clouds to develop.

The mountains act as a barrier to aviation. Mountain waves may occur when mountains or hills are present. Lenticular clouds are more prevalent in mountainous or hilly regions as a consequence.

How to Identify Lenticular Clouds

Clouds of this type are usually circular in shape. They may sometimes be found stretching across a mountain range’s ridgeline. It might be easier to witness if just one mountain is in the area.

You’ll want to discover a disk-shaped cloud hovering above a huge hill, mountain, or occasionally a building while hunting for lenticular clouds. Lenticular clouds may be shaped like a plate or a sphere, and they come in several sizes.

At different altitudes, lenticular clouds may develop. They may be stacked on top of one other. Lenticular clouds are usually found when a pile of flat clouds appears over a mountain.

Some lenticular clouds may look like flying saucers with elongated ends on each side. The flying saucer part of the cloud would be hovering over the ridge or peak of a mountain.

Lenticular clouds with extended ends on each side may appear to be flying saucers. The cloud’s flying saucer section would be hovering above a mountain’s crest or peak.

There are three different types of lenticular clouds. These clouds include:

The height of the lenticular cloud determines its type. Three of the 10 primary cloud types are stratocumulus, altocumulus, and cirrocumulus. These clouds’ names indicate where they are found in the atmosphere.

How Do Lenticular Clouds Form?

When it moves into mountains or hills, winds are pushed up against them. As one climbs higher in the atmosphere, the temperature gets colder.

The next thing that happens is what separates lenticular clouds from ordinary clouds. A stable layer of warmer air exists above a level of cool air at high elevations on hills or mountains. As a result, clouds take on a peculiar saucer-like form.

The air flows back down after it has passed through the barrier. When it passes through a process known as compressional warming, the liquid water droplets start to evaporate. As a result, as air descends under greater pressure, the temperature climbs.

Because the air gets cold enough to turn into water droplets or ice crystals, forming clouds, we are able to observe this action. We would not be able to see this phenomena if clouds did not form.

What Are the Effects of Lenticular Clouds?

Lenticular clouds may also generate strong winds in addition to producing stunning scenery. However, it’s even stranger than that. Air can be totally calm in another place just hundreds of feet distant, while generating extremely severe winds in one spot.

Lenticular clouds do not create precipitation in the same way that cumulus clouds do. Natural weather forecasters, on the other hand, may be possible.

Lenticular clouds are formed when there is an increase in moisture at high altitudes. These clouds may sometimes indicate that rain is on the way. Depending on the time of year and location, it might also indicate an approaching snowstorm.

How Long Do Lenticular Clouds Last?

Once generated, lenticular clouds may persist for hours. Before progressively disappearing, they’ll stay in the same location. For example, the lenticular clouds in this timelapse hovered above the Arizona highlands for many hours.

Depending on the sort of cloud, clouds might live for shorter or longer periods. Some clouds may last for up to four hours, however others may continue for much longer. Lenticular clouds have the potential to last longer because they are stationary due to the local conditions. Winds don’t throw them away.

Can You Fly Through Lenticular Clouds?

Because they may encounter severe turbulence, pilots often avoid flying through lenticular clouds.

These clouds may be flown through by a pilot with considerable experience in the field. They may be able to safely travel through the area where the air rises. Nevertheless, due to the air’s constant up-and-down shifting, it may be dangerous.

Lenticular Clouds Are Mistaken for UFOs

One of the suspected causes of reported UFO sightings is lenticular clouds. Because of their shape, these clouds may be mistaken for UFOs.

In the evening or at night, suppose lenticular clouds developed above a mountain. It’s possible that it could be mistaken for a UFO in that case.

Clouds of various shapes and sizes may hold distinct quantities of water. A cumulus cloud might weigh up to 1.1 million pounds. Clouds, on the other hand, are able to float since they are less dense than the air beneath them.

According to experts, clouds cover 67% of the Earth’s surface on a daily basis, based on satellite observations and photos from space. The ocean covers the majority of cloud cover. On a regular basis, less than half of the land’s skies are free of clouds.

The Highest Clouds Are Made of Ice Crystals

How many cloud types are there?

Clouds come in a variety of shapes and sizes. Cloud types, on the other hand, are divided into 10 groups. Other varieties of clouds, which are regarded unusual or uncommon, are often classified in one of these groups.

Can you touch clouds?

We can’t feel clouds because they’re made up of tiny water droplets. Clouds, on the other hand, we can touch all too often. You’ve passed through a low-hanging cloud before if you’ve ever been walking through fog.

If you’ve heard someone say they can tell rain is coming by the smell outside, there’s a reason for it. Storm clouds can produce a smell due to lightning strikes inside them.

Ozone is a naturally occurring gas that is created by lightning inside a cloud. When it’s going to rain, or just after a fresh rain, ozone is the scent that people smell.

Is it possible to create a cloud indoors?

Clouds may be produced indoors, yes. The atmosphere in the room needs to be just right. The room must be chilly and moist air is required. Berndnaut Smilde, a Dutch artist, makes clouds indoors that are unusual and beautiful.

Can a cloud touch the ground?

The ground may be touched by clouds. The height or depth of clouds from the Earth’s surface may be used to classify them. Clouds of fog may touch the ground and are one form of cloud.