Although the megamouth shark was spotted for the first time in the mid-seventies, there have only been about 300 sightings of this rare fish reported since then. The recent discovery of a pair of megamouth sharks just 30 miles off the coast of San Diego came as a surprise to the fishermen who saw it.

What Is Known About The Megamouth Shark?

Since 1976, fewer than 300 sightings of the megamouth shark have been recorded. Megamouth encounters have been most commonly caused by the shark being caught as bycatch.

The megamouth has a huge head and thick lips and grows to a length of up to 7 meters / 22.97 feet. 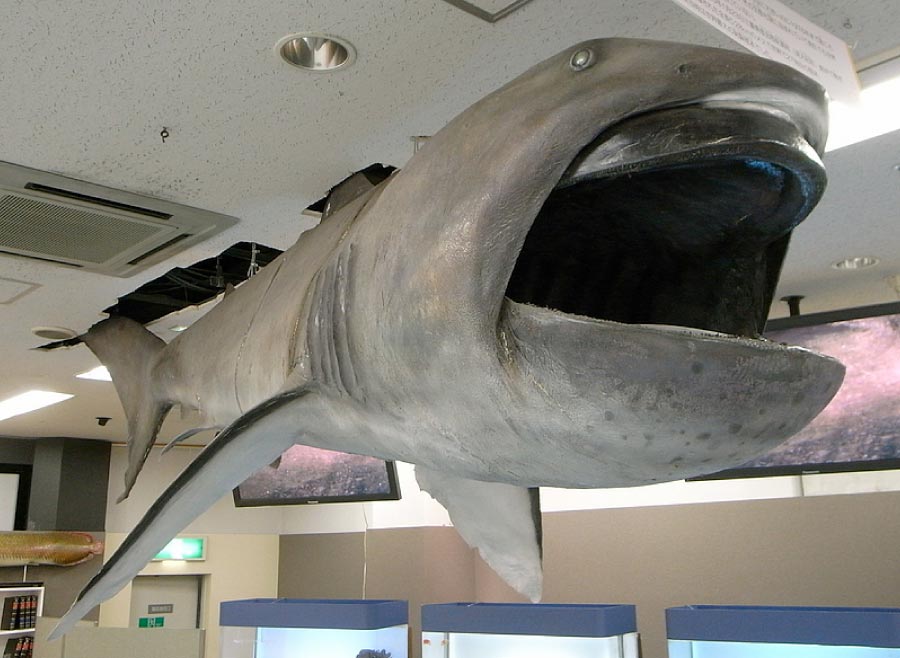 The megamouth is not an active hunter, despite its size, unlike the majority of sharks. Instead, it’s a filter feeder that swims across the sea with its mouth gaping, collecting food as it goes. Food is filtered from the water by structures known as gill-rakers inside the shark’s mouth.

The whale shark and the basking shark, which are the world’s biggest and second-largest fish, respectively, are the other two sharks known to feed in this manner.

Plankton, jellyfish, and tiny crustaceans are among the foods captured by the megamouth shark. Observers have occasionally mistaken the shark for a juvenile orca because of its huge mouth, tiny teeth, and rounded snout.

The white upper lip of the shark has been suggested to emit Bioluminescence, which may be used as a light trap to attract prey into its mouth.

This premise has since been debunked, as research has shown that this skin is composed of the same material that makes fish scales shine. Even though it is not bioluminescent, the notion that this serves as a light trap is still tenable.

Where Is The Megamouth Shark Found?

After becoming entangled in a US Navy ship’s anchor off the shore of Hawaii in 1976, the first megamouth shark was discovered.

A second was discovered off the coast of California eight years later. The Pacific, Atlantic, and Indian Oceans have all been home to Megamouth sharks.

Off the coast of Taiwan, over half of all megamouth sightings have been recorded. This is unclear, since the megamouth population in this area appears to be largest, or because there are more megamouths captured due to the country’s active whaling industry.

Megamouth sharks must be reported and the body must be retained for samples since 2013, when Taiwanese fishing vessels were compelled to do so. A total of 136 megamouth shark captures have been documented as a consequence of this.

Megamouth shark protection is being advocated by local environmental organizations. The sharks are being taken mistakenly as bycatch, according to the fishing business, but they are being targeted purposefully.

Why Is The Megamouth So Rare?

Because of its deep-water environment, the megamouth is seldom observed by humans. From the surface to a depth of 15,000 feet (4600 meters), the species may be found.

The megamouth spends the majority of its existence under the ocean’s surface, only coming to the surface at night, as do many deep-sea creatures.

How Fast Does The Megamouth Shark Swim?

Before releasing an individual megamouth into the ocean, researchers attached a radio tag to it and caught it off the coast of California. The shark moved at a pace of between 0.93 and 1.30 miles per hour, according to the tracking data. Throughout the night and day, it moved up and down in the water column. In contrast to more active filter-feeding sharks, the shark’s soft and flabby body demonstrates its poor swimming ability (source).

Scientists do not have enough information on the species to determine if it is in need of conservation, but these sharks are likely to be naturally uncommon. Since they grow so slowly and have such low reproduction rates, any population loss may be difficult to reverse. They are regarded as vulnerable to overfishing.

Scientists have wondered if this might be courting activity, indicating that southern California may be an important breeding habitat for this unusual species.

How Much Do We Know About Megamouth Reproduction?

Since no recovered specimens include embryos, there is little concrete knowledge about megamouth shark reproduction. Female sharks, on the other hand, are ovoviviparous, which means that small sharks develop inside their mother’s body before emerging as live young.

Rather of providing nutrients via a placenta, as other animals that give birth to live young do, the mother will feed her young with unfertilized eggs throughout their pregnancy. The newborn sharks are normally around 170cm long and filter feeders when they are born.

Although there have been a few studies on the megamouth’s courting habits, little is known about their mating habits, although females with fresh mating scars on their bodies have been found at different times of year. Since most juvenile megamouths have been found in lower latitude waters (source), it is also believed that the shark gives birth to young.

Female megamouths tend to be larger than males. Like other sharks, the species is thought to have indefinite development. As a result, the shark will continue to grow in size for as long as its surroundings allow it to do so, never stopping throughout its lifespan.

Female sharks are bigger than males because they need the extra girth to carry their young, as is the case in other shark species (source).

Much of what we know about megamouth sharks comes from knowledge gained from other shark species, and there is little data directly relating to megamouths; despite our increased understanding of the species over recent years.

This implies that scientists are still uncertain about several things.

Megamouth sharks, for example, can grow up to be enormous and live a long time. Are there any predators in the area? How many pups do they have? We still don’t know much about their courtship behavior or where they breed, despite the fact that mating scars have been observed.

We have no idea how widely the sharks are distributed, and without this specific information, it would be impossible to know how to safeguard them. Every fresh megamouth discovery helps scientists better understand these mysterious creatures and their strange lives in the deep by providing new information.