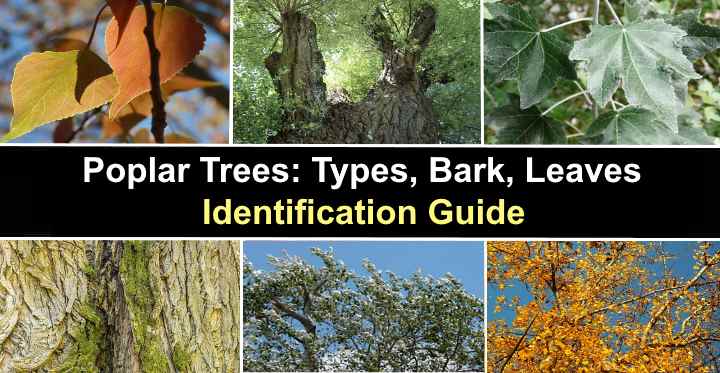 Poplar (Populus) trees have gorgeous grayish bark, little clusters of drooping blooms, and huge deciduous leaves with rounded to triangular leaves. The bark of many poplar trees is white, gray, or black, and their triangular, ovate leaves are easily visible.

White poplar trees have white bark and leaves that appear to twinkle in gentle breezes, and they are the most common poplars tree. A fresh balsam scent can also be found in some poplar species.

Other varieties of poplars include black poplar (Populus nigra) and balsam poplar (Populus balsamifera), in addition to the common white poplar tree (Populus alba). Poplar trees are easily grown trees that may be seen in parks or residential areas as decorative trees.

All poplar species are deciduous. The identification of typical poplar trees is the subject of this guide. Different poplar species may be identified by descriptions and images of the leaves, bark, and flowers.

The willow family Salicaceae includes the genus Populus, which includes poplar trees. Poplar trees may grow to be between 20 and 165 feet (6 and 50 meters) tall with a spreading canopy of up to 70 feet (21 meters). USDA zones 3 through 9 are ideal for poplars.

Poplar trees provide excellent shade because they come in a variety of sizes and have large canopies. Poplars with a columnar growth pattern, such as the Lombardy poplar (Populus nigra ‘Lombardy’), are better privacy trees. Poplars may also be used to build a windbreak by planting tall privacy hedges.

Poplar trees are native to the area and have a moderate lifespan. Poplars generally take 12 years to reach maturity and develop for around 50 years in total. In damp, wet soil where there is plenty of room, these quick-growing trees are excellent candidates for growing.

Poplars have a shallow root system that might spread. Poplar roots can push up pathways and disturb lawns, which you’ll discover. Due to the spreading root systems, it’s a good idea to plant poplars 20 to 30 feet (6 – 10 meters) away from your home, driveway, or patio.

Cottonwood and aspen trees are two other common trees in the Populus genus. Populus trees are all similar in appearance. Poplars are decorative trees that grow tall, fast, and short-lived.

It’s worth noting that tulip poplars (also known as yellow poplars) aren’t part of the Populus genus. Populus species’ distinguishing characteristics are looked at in this article under the name “poplar.”

Poplar trees have smooth bark that ranges in color from white to silvery-gray. Lenticels on the bark are a characteristic of poplar trees. Horizontal scores or rough growth look like these dark-colored lenticels. The bark of many species darkens and becomes rough or fissured as poplar trees mature.

Due to its bark, the common white poplar tree may appear to be a birch. Poplar tree bark is silver-gray in hue and doesn’t peel, making it ideal for winter. Yet, the exfoliating pure white bark of most birch trees peels off in sheets.

Poplar tree species have green leaves with a silvery-white underside, which is their identifying characteristic. The fluttering leaves of the poplars create a sparkly effect in the wind. The white poplar (Populus alba) and quaking aspen (Populus tremuloides) appear to be trembling or quaking all of the time, even when they are not. 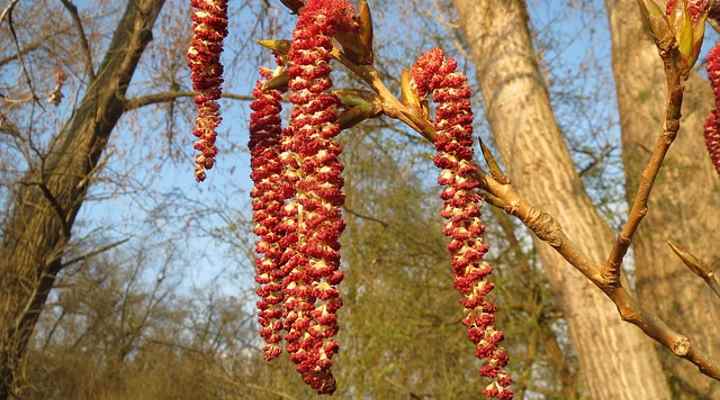 The blooms on poplar trees are long, drooping clusters of tiny flowers called catkins that grow in a slender conical shape. Populus × canadensis (Canadian poplar) The cotton-like, fuzzy material that emerges after flowers have bloomed is a distinguishing characteristic of most poplar trees. The seeds are protected by the fine hairy, wooly hairs, which blow away easily.

The color of the bark and leaf shape are excellent ways to identify poplar tree species. Poplars have distinctive leaves that may be used to identify them. White poplars feature silvery undersides and oval or lobed leaves with notches on the margins.

Balsam poplars have triangle leaves with serrated edges, whereas black poplars have spherical leaves. The bark color of most poplar trees is the most common aspect of their names.

Types of Poplar Trees (With Pictures)

Let’s explore the characteristics of common poplar trees, as well as how to identify them, based on their leaf form and bark color. 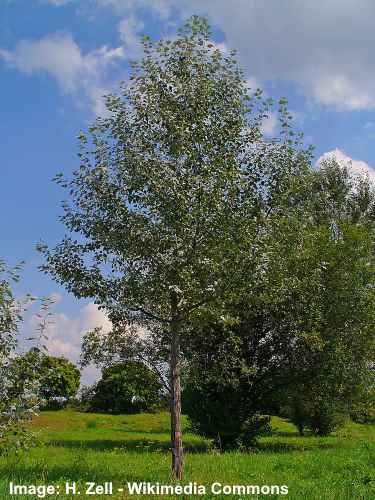 The diamond-shaped marks on white poplar tree bark are smooth. The wide canopy of white poplars, which grow to be 50 to 100 feet (15 to 30 meters) tall, provide ample protection. White poplars prefer moist to wet, well-drained soil, like other species of poplars. In full sun, white poplars thrive in USDA zones 3 through 8. 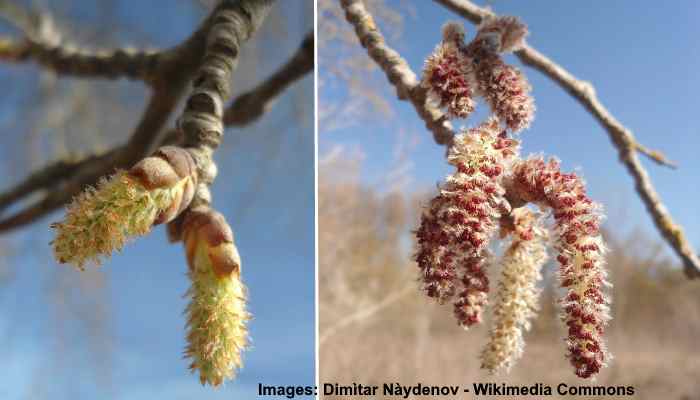 Garden landscapes should be avoided with white poplar trees (left) and males (right). Not to mention the damage they can do to buildings, their aggressive root system can push up driveways, paths, or make lawns look unsightly.

White poplar trees produce cotton-like fluffy blossoms, making them a messy tree species to look at. The wood is relatively weak, which is another factor to consider before planting white poplars. Strong winds are capable of snapping branches.

Storms may occasionally uproot the big trees due to the poplar tree’s shallow root system. Plant poplar trees at least 30 feet (10 meters) from your home to avoid harming buildings. 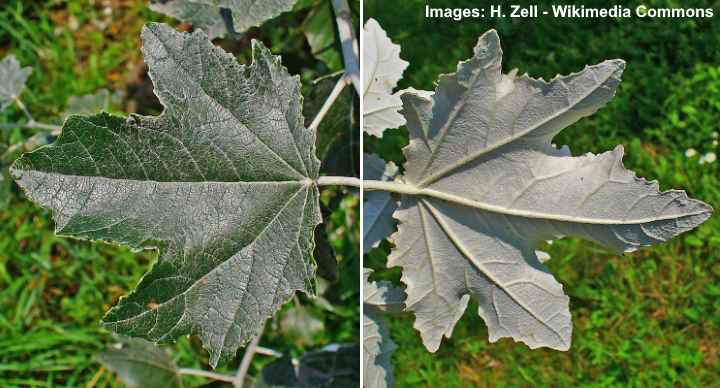 White poplar tree leaves are simple, lobed lobes that mimic maple leaves on the top side and underside. It has dark green top leaf blades that are 2 to 4 inches (5 to 10 cm) long. Fine hairs cover the silvery underside of the white poplar leaves, which is a characteristic. The white poplar tree has little color in the autumn. 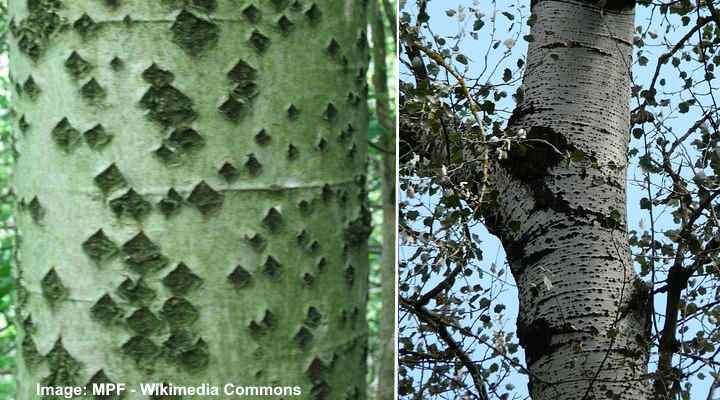 White poplar tree bark has a gray-green tint and is thin and smooth. Thin horizontal lines around the tree and diamond-shaped scars are used to identify this poplar. The bark of white poplar trees gets deep wrinkles that appear black as they mature. 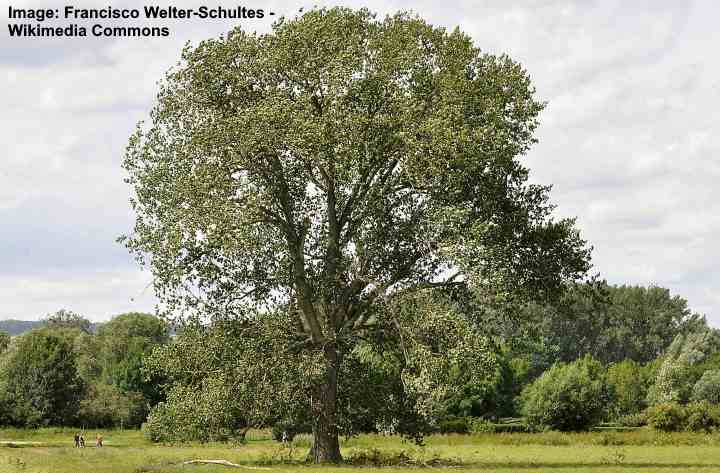 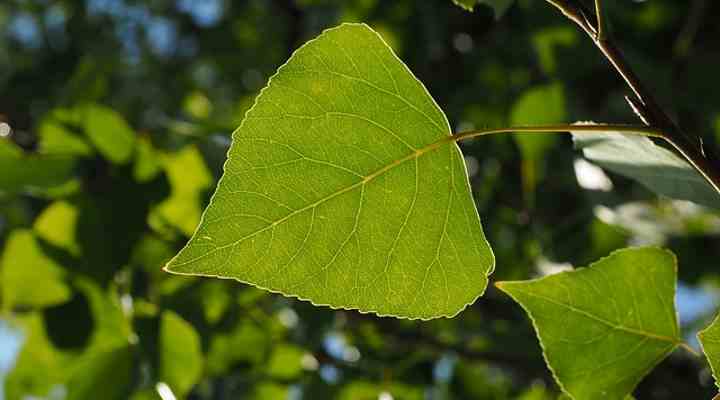 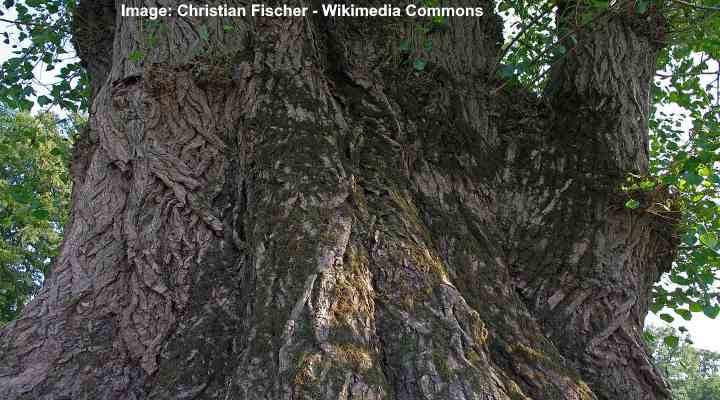 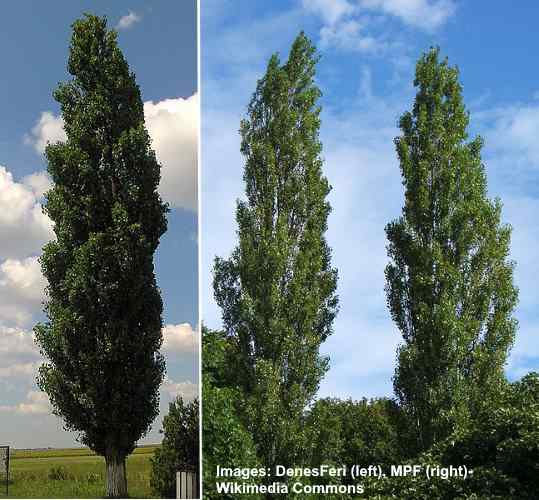 The Lombardy poplar tree has upright branching growth, triangular leaves, and dark gray, furrowed bark. It is a stunning tall, slender tree. The Lombardy poplar’s slender, columnar development is an distinctive characteristic. Between 40 and 50 feet (12 and 15 m) tall and 10 to 15 feet (3 to 4.5 m) broad, this slender poplar tree thrives.

The branches of the Lombardy poplar grow upward, nearly parallel to the straight stem, making it a fastigiate tree. Lombardy poplar trees are best utilized as tall privacy barriers or windbreaks. Up to 50 ft (15 m) tall, the tree’s dense foliage creates a natural screen.

The columnar tree, sometimes known as the Italian poplar, is a leafy tree with cottony clumps of white seed hairs that fly about in the summer. Poplars are also unsuitable as an ornamental landscape tree because of their shallow roots and aggressive nature.

Deltoid (triangular) leaves with a pointed tip and finely-toothed blade margins are found on Lombardy poplar trees. 2″ to 4″ (5 – 10 cm) long are the bright green poplar leaves. When the leaves of Lombardy poplars turn golden yellow, they contrast vividly with white poplars.

As it grows, the texture of Lombardy poplar tree bark becomes rough and the color dark gray-green, eventually turning black and fissured. 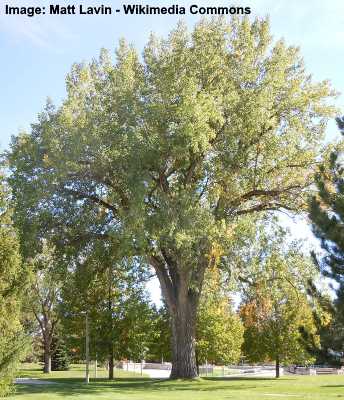 The necklace poplar grows to be between 20 and 60 feet (6 and 22 meters) tall. The necklace poplar, unlike many other poplars, lives a long time. These poplars have a lifespan of between 70 and 100 years, which is far greater than the typical 20 or 30 years for most poplars. 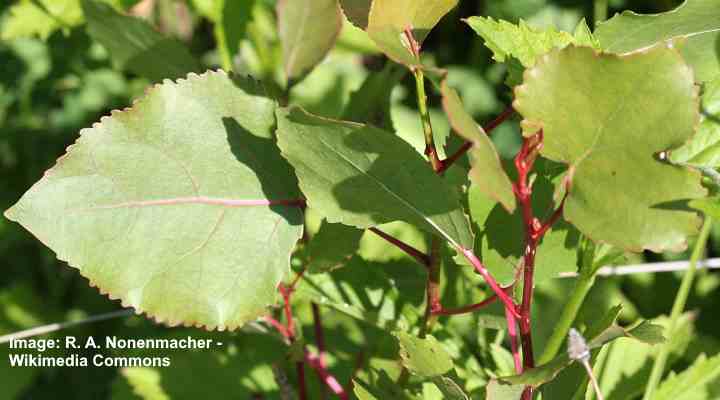 Necklace poplar tree leaves have a triangle form with coarsely serrated borders and are made of necklace poplar leaves. Flattened petioles connect the leaves to the branch, causing them to move back and forth constantly. In the autumn, the leaves of this poplar variety fade from dark green to yellow. 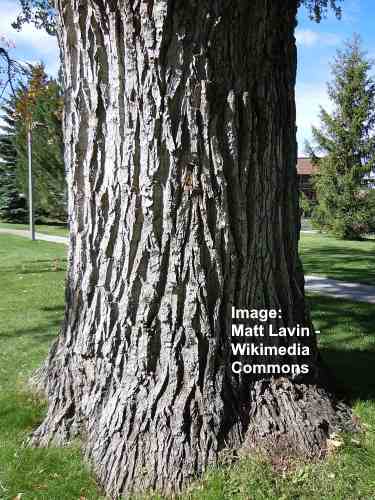 When the tree is young, its bark looks smooth and silvery. Mature necklace poplar trees have dark gray bark with deep fissures, giving the tree trunk a rough texture. 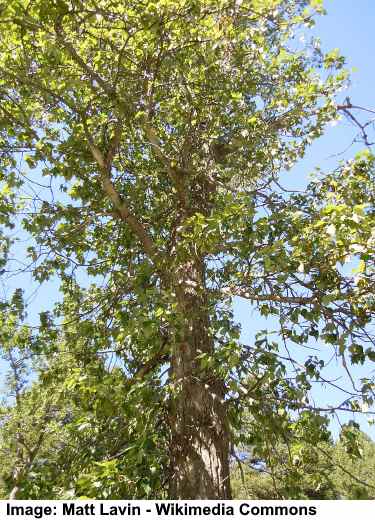 Balsam poplars rise to between 80 and 130 feet (25 and 40 meters) tall. Cold-hardy deciduous trees that thrive in USDA zones 2 through 7 include balsam poplar trees. The balsam poplar thrives in wet, well-draining soil and full sun, as do other poplars. 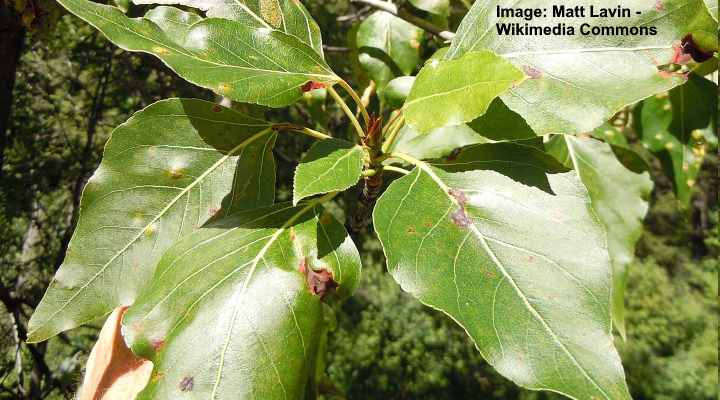 Narrow, ovately shaped leaves with a protruding tip and finely-serrated borders make up balsam poplar tree leaves. On branches, the dark green simple leaves are arranged alternately. The fresh, aromatic scent of balsam comes from the leaves of the balsam tree. The leaves are up to 2.3 inches (6 centimeters) long and broad. 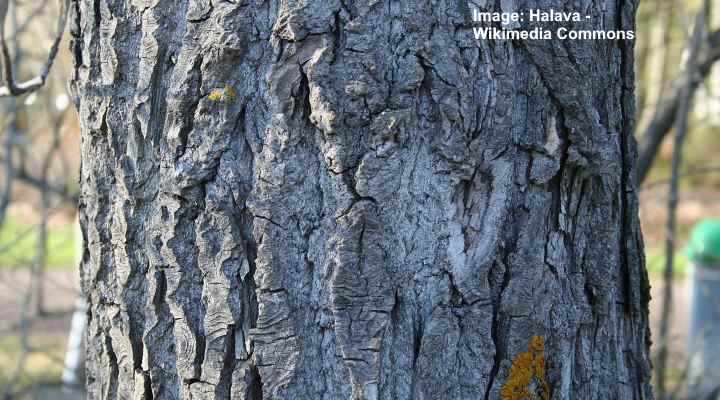 When the tree is young, its bark is smooth and gray (mature tree). The bark darkens and fissures with long, scaly ridges as the poplar tree matures. 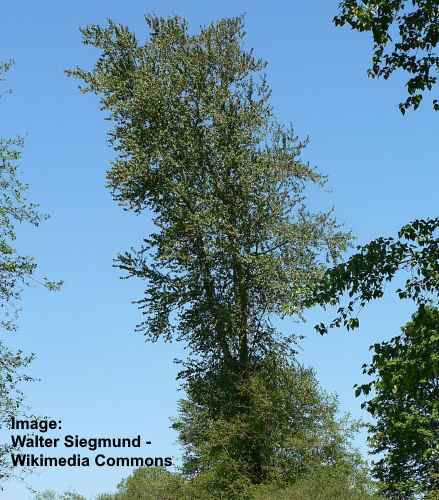 The lower branches hang down, giving the tree a weeping appearance from the bottom up. This poplar species should be planted at a distance from buildings because of its aggressive and sturdy root system. 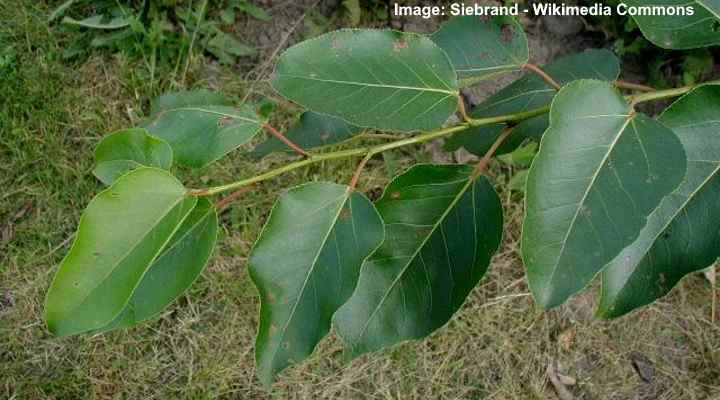 Simple leaves that are widely ovate and grow alternately on branches are known as western balsam poplar leaves. The leaves have a wedge or heart shape and grow 3 to 5 inches (7 to 12 cm) long.

Along the blade margins, there is nice serration. The top side of the large leaves is dark green, while the bottom is silvery-green. 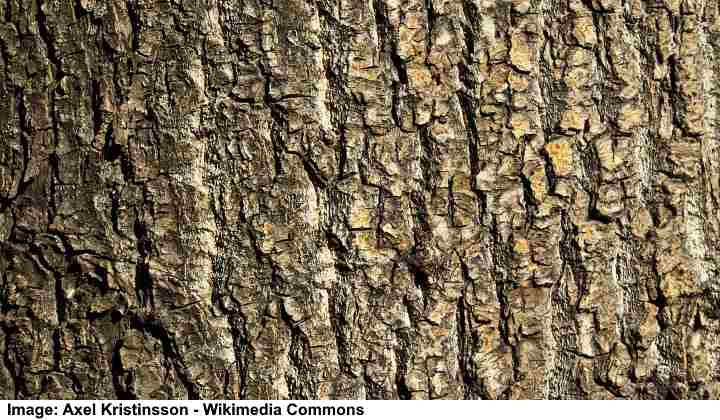 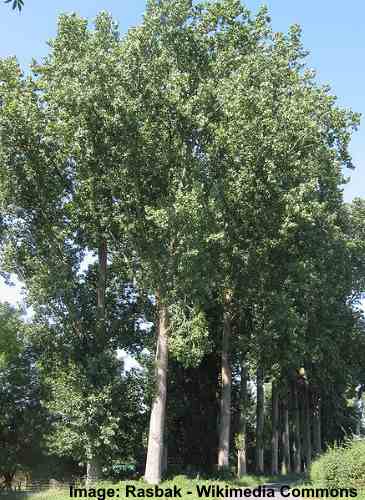 The attractive broadly columnar tree has ovate, heart-shaped glossy green leaves that thrive thickly on the branches of Canadian poplar (Populus × canadensis). This 130-foot-tall (40-meter-)poplar tree is growing. The rounded, thinly spreading crown of the big tree distinguishes it.

Male Canadian poplar trees bloom with crimson flowers on long dangling catkins in the spring. The hybrid poplar tree, also known as the Carolina poplar, is a cross between the black poplar (Populus nigra) and the necklace poplar (Populus deltoides). 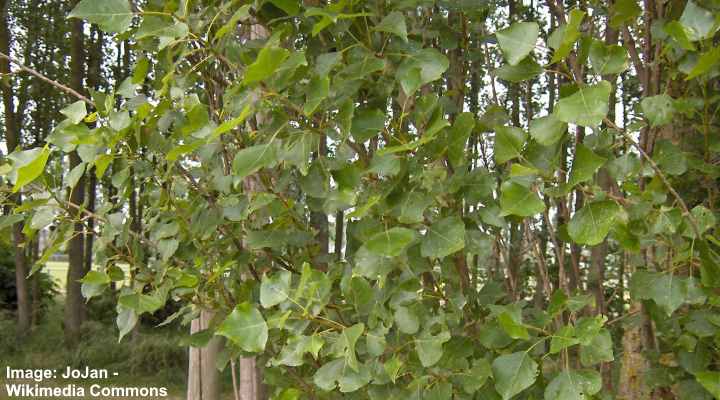 Wedge-shaped with a flat or rounded base, serrated borders, and a tapered tip, Canadian poplar tree leaves are wedge-shaped. The long flattened petioles on the Canadian poplar’s leaves, like those of other poplars, make them flutter in gentle breezes. 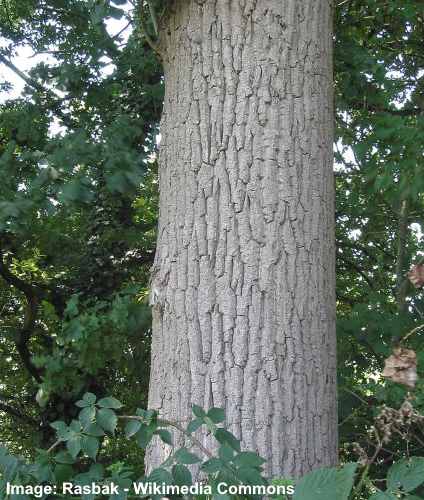 As it matures, the white and smooth bark of a Canadian poplar tree becomes furrowed and black. 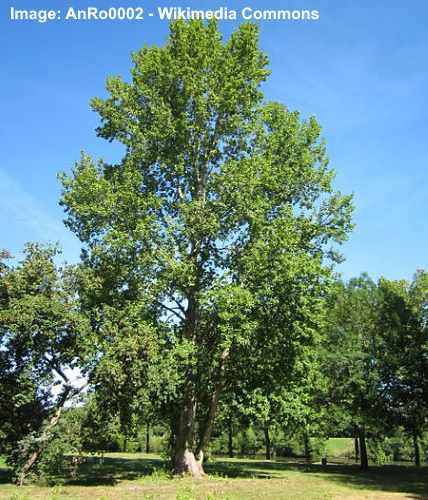 The gray poplar is a quick-growing, vigorous tall tree with dark green leaves and a fuzzy silvery underside. It is known as Populus × canescens. The growth habit of grey poplars is uneven, with a rounded crown that spreads out. Between 40 and 70 feet (12 and 21 meters) tall, this hybrid poplar tree grows. 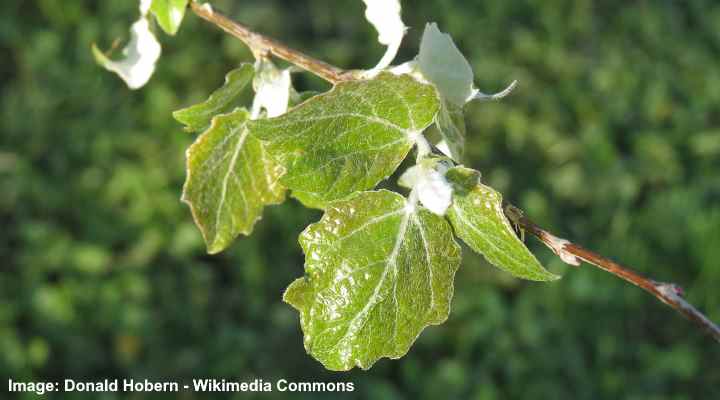 Gray poplar tree leaves have serrated borders and are rounded to oval shapes. On short petioles, the round simple poplar leaves are attached in an alternate pattern. 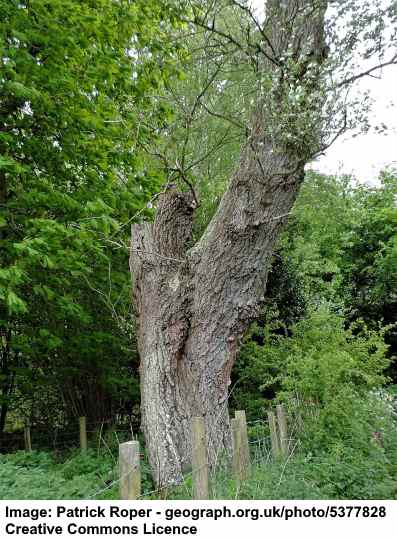 When the tree is young, gray poplar bark has a white and smooth appearance. On the trunk, the bark becomes progressively darker and has superficial fissuring.