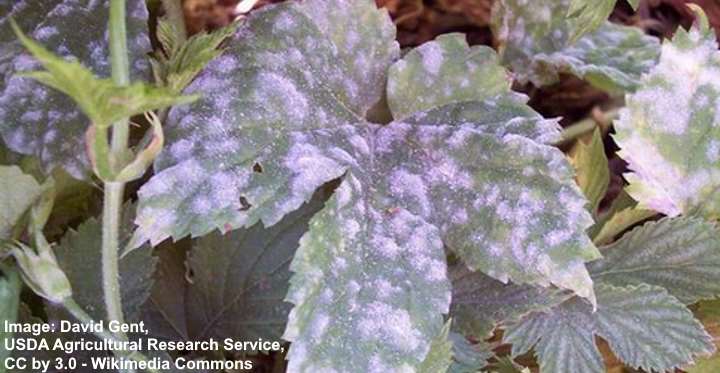 Powdery mildew on plants is caused by low temperatures, little light, and humid air, as are other fungal diseases. Avoiding the conditions that give leaves a dusty gray-white coating is one way to prevent powdery mildew. Powdery mildew disease can be treated in a variety of ways.

Powdery mildew can be naturally gotten rid of with homemade sprays made with milk, baking soda, or neem oil. The top remedies for Powdery Mildew are listed in this article. Please continue reading to learn what to do if your plant leaves appear to have a coating of white dust.

What Is Powdery Mildew? 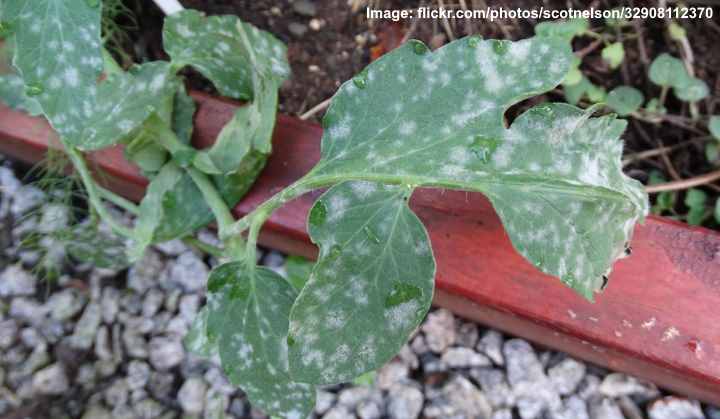 Powdery mildew is a term used to describe several fungal infections that affect leaves and other plant parts. It appears in the photograph as white. Fungus spores look like dust or dirt on the surface of the plant’s leaves. The leaves and stems acquire a superficial white powdery look as the fungal infection spreads.

Powdery mildew appears like a layer of gray dust depending on how bad the infection is. It is possible to clean the leaf surfaces of a few patches of dusty gray spores. The green foliage, on the other hand, has a filthy, scruffy look due to patches of whitish-gray fuzzy growth. There are almost 900 fungal species that cause powdery mildew, according to researchers.

Erysiphe cichoracearum is the most prevalent. All plant mildews, on the other hand, produce a grayish-white fuzzy on plant leaf surfaces. Ornamental houseplants, greenhouse crops, and garden flowers are all susceptible to Powdery Mildew.

What Causes Powdery Mildew on Plants?

When plants grow in low to moderate temperatures and high humidity, fungus spores that cause powdery mildew thrive. Powdery mildew may spread farther on plants when there are no wet conditions. The majority of scientists believe that the ideal growing conditions for white fungus on plants are limited light, chilly air, and humidity.

According to the USDA, daily temperatures of 80°F (26°C) and high nighttime humidity promote fungal spore proliferation. On humid, warm days with partly cloudy skies, the fuzzy white spots on leaves become apparent, and the evenings are cold.

Powdery mildew can also grow on leaves if there is low daytime humidity and temperatures of 70°F to 80°F (21°C to 26°C), according to researchers from Penn State University. Powdery mildew affects plants in moist environments, according to several studies.

Dryness, on the other hand, may cause white plant fungus in various plants. Powdery mildew can be caused by the following factors:

Powdery mildew isn’t usually fatal to plants, at least not immediately. The mold that grows on plant leaves, on the other hand, is quite unpleasant. Powdery mildew will slowly diminish the plant’s vigor and cause it to grow stunted as long as it spreads.

The leaves will eventually color, warp, and harm buds and young fruit as a result of the white plant mold. Since powdery mildew is a mold that may harm plants, eliminating it as soon as feasible is recommended.

Which Plants and Vegetables Are Most Susceptible to Powdery Mildew? 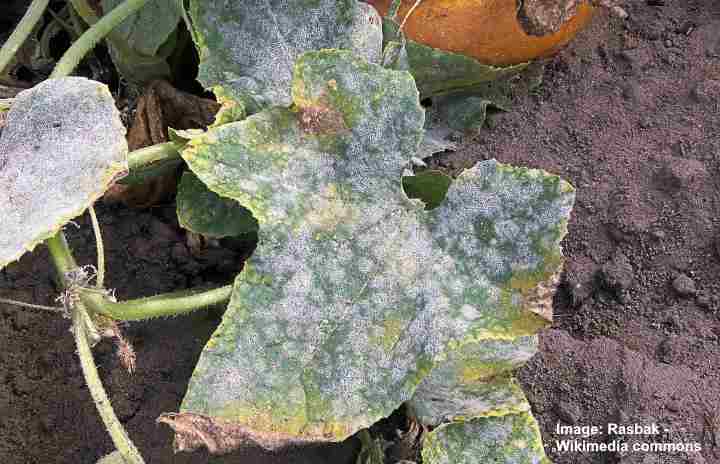 Powdery mildew may affect any plant that is exposed to humid summers, including cucumber leaves. Houseplants such as begonias, ivy, jade plant, kalanchoe, and African violets are susceptible to the fuzzy white fungal mold. Powdery mildew thrives in conditions of temperatures around 70°F (21°C) and little light, poor air circulation, and humidity.

Powdery mildew can harm roses and other flowering plants in gardens. High humidity, limited air circulation, little sunlight, and dry soil all contribute to the white powdery growth on rose leaves. Powdery mildew may prevent rosebuds from opening, aside from creating a white power on leaves.

Cucumbers and other greenhouse vegetables are also susceptible to powdery mildew. Fungus spores flourish in the warm, humid environment of a glass house. Powdery mildew on leaves can lead to leaf death and a reduction in vegetable output if it is not controlled.

Plants and vegetables susceptible to powdery mildew, according to the University of California, include the following:

Can Powdery Mildew Spread to Other Plants?

Powdery mildew can spread throughout a garden, especially in arid settings. Fungus spores may be moved by the wind and deposited on other vegetation, resulting in white spots. Only certain fungus species infect certain plant species, though. On houseplants or garden plants, suppose you notice signs of powdery mildew.

In this situation, it’s critical to get treatment for the infection right away. To avoid additional outbreaks of powdery mildew on plants, it is also vital to improve your plants’ growing environment.

How to Treat Powdery Mildew 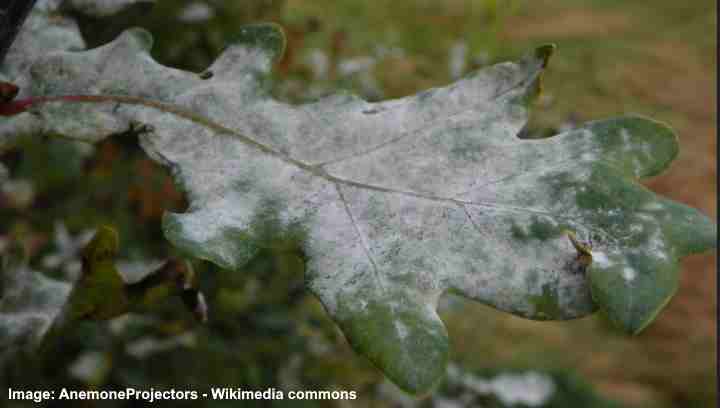 Spraying the leaves with fungus-killing solutions is the best way to treat powdery mildew. Milk, baking soda, neem oil, and weak vinegar are some of the simplest and most effective powdery mildew treatment methods. These natural substances are anti-fungal and pose no danger to your family’s health, so they won’t damage plant leaves.

Fungicide resistance is another good reason to pursue natural remedies for powdery mildew. Many fungal strains resistant to commercial fungicides have been discovered in the journal Microorganisms, according to the article. As a result, several chemical approaches for Powdery Mildew Control are no longer effective.

Powdery mildew can be treated with homemade sprays. The good news is that you should have everything you need to make a powdered mildew spray in your kitchen. A spray bottle, water, and the ingredients baking soda or milk are all you need to create your spray.

Natural ingredients are very successful in the treatment of Powdery Mildew, according to scientific research. Powdery mildew outbreaks were suppressed and reduced in severity by scientists who discovered that sodium bicarbonate (baking soda) and milk. Garlic and acetic acid (vinegar) were used in some of the treatments. There are a few things to keep in mind when using foliar sprays for powdery mildew:

Powdery mildew on plants may be treated with a milk spray applied to the infected leaves. Milk has anti-fungal properties, which will help your plant stay healthy. Milk is also non-toxic and fungicidal, so it’s unusual for it to harm plant leaves. Mix 6 fl. oz. of milk with powdered mildew to make a milk spray. 14 fl. oz. (380 ml) of whole milk A 400-milliliter (oz.) beaker

A spray bottle is used to pour the milk solution. Make sure to coat all plant leaves with spray, and make sure to cover the leaves’ underside to help eliminate powdery mildew. It is permissible to dry the item. Repeat every seven days until you see symptoms of powdery mildew. You may employ skimmed or whole milk with the homemade powdery mildew milk spray.

Milk has been used to treat powdery mildew, according to scientific studies. Milk-based plant sprays may cure and prevent fungal diseases, according to the journal Crop Protection. Whole milk was up to 70% more effective than chemical sprays in terms of efficacy.

Baking Soda Spray to Get Rid of Powdery Mildew

Mix 1 tablespoon of baking soda and 1 gallon (3.8 l) of water together to make a baking soda foliar spray for powdery mildew. Add 1 teaspoon of liquid Castile soap or dish soap to a spray bottle and pour in the mixture. To mix the ingredients, thoroughly blend them.

To eliminate powdery mildew on mold-affected plants, spray them with baking soda. Make sure you generously douse both sides of the leaves, and allow them to dry thoroughly.

Neem Oil Spray to Get Rid of Powdery Mildew

To get rid of white mold from leaves and stems, spray plant leaves with neem oil. Neem oil, which is also a natural pesticide, possesses natural anti-fungal properties. Powdery mildew can be eliminated by using only organic neem oil, Castile soap, and water in a simple mixture.

To get rid of the fungal disease, generously spray the neem oil treatment on all leaves exhibiting symptoms of powdery mildew. If necessary, leave to dry for a week before repeating. Neem oil has been demonstrated to be a plant-based fungicide according to scientific studies.

According to one research, all parts of the neem tree are anti-fungal. Powdery mildew outbreaks could be prevented by spraying a neem oil solution on lilac bushes and hydrangeas.

The anti-fungal properties of acetic acid may also help treat powdery mildew, which is why it’s used in vinegar. You should proceed with caution when using this approach since vinegar can burn foliage. It’s preferable to test the solution on a tiny portion of the plant before applying diluted vinegar to white mold-affected foliage.

Mix 2 tablespoons of white vinegar with 1 gallon (3.8 l) of water to make a vinegar spray for powdery mildew. Spray the plant with the solution from a spray bottle. Coat the upper and underside of the leaves to eliminate white mold, as with all powdery mildew sprays.

How To Prevent Powdery Mildew

Preventing plant fungus, such as powdery mildew, is the best strategy to manage it. It’s critical to provide the best environment for healthy plant development because growing circumstances frequently cause white mold outbreaks. This requires accurately controlling moisture, heat, and light. On houseplants and garden plants and vegetables, here are some Powdery Mildew Prevention Tips.

Powdery mildew may be caused by too much air moisture or a lack of humidity. Plant leaves need enough space to develop, and air has sufficient room to move. Make sure that plants don’t get too close together. Also, to enhance air circulation and humidity levels, prune shrubs.

Do not allow indoor plants, such as philodendrons or houseplants, to sit in waterlogged soil. Most plants thrive in soil with excellent drainage and moisture retention. Watering the plants when the top layer of soil or ground has dried out is usually recommended. It’s also a good idea to water when the earth is partly dry. This helps prevent white mold on the soil.

You’ll need to water plants more often during hot, dry spells. Since it avoids stressing plants due to a lack of water, this advice also helps prevent powdery mildew. Going easy on fertilizer application is another soil management tip to avoid powdery mildew. Each plant has its own set of nutritional needs. Plants, on the other hand, may be vulnerable to powdery mildew if there is too much nitrogen in the soil.

Grow plants in the right location to avoid powdery mildew

To avoid white mold on leaves, make sure plants get adequate sunlight. Fungus spores are prevented from multiplying when most plants prefer to grow in full sun or partial shade. Plant shade-loving plants that aren’t prone to powdery mildew in shaded parts of your garden.

Hostas, liriope, and creeping buttercup are some of the best shade plants for example. Sansevierias, golden pothos, prayer plants, and ZZ plants flourish in shadier rooms with little light indoors.

It’s important to water plants properly because fungus thrives in dark, damp habitats. Watering garden plants early in the day or late at night is the first thing to avoid. Powdery mildew may thrive in a lack of sunlight and cold air. Second, avoid water splashing on leaves while watering indoors and around your yard.

Nonetheless, in mid-morning, it is frequently best to water garden plant leaves in warm, dry weather. Powdery mildew on the leaves of certain plants can be avoided by using this watering technique.