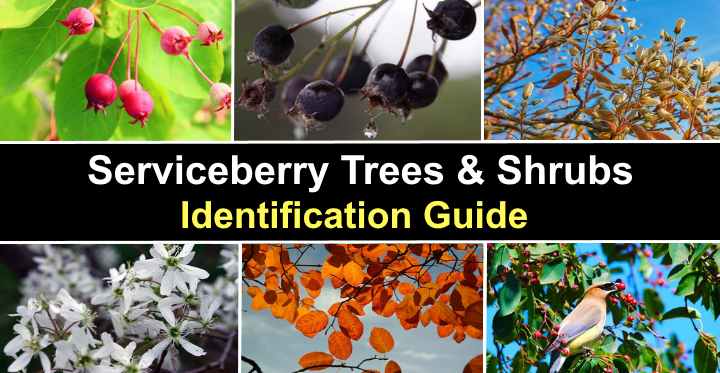 Serviceberry is a collection of tiny deciduous fruit trees and multi-stemmed plants with delicate white blooms that bloom in early spring. Long oval leaves with finely serrated edges, clusters of showy white 5-petalled flowers, smooth gray bark, and small round edible purple pome fruits are all characteristics of serviceberry trees and shrubs. Since they have a visual appeal in all four seasons, serviceberry trees make excellent garden landscaping plants.

Since the serviceberry fruits begin to ripen in June, they are often referred to as juneberries. Shadbush, shadblow, Saskatoon, sugarplum, chuckley pear, and wild plum are some other names for serviceberry plants. This article provides information on identifying serviceberry tree and shrub varieties.

These beautiful trees and their flowers, leaves, and berries will be easier to spot in a landscape if you have descriptions and pictures of them.

What Is a Serviceberry (Amelanchier)?

Trees and shrubs in the genus Amelanchier are known as serviceberries. Most plant species produce suckers and multiple stems, with Serviceberry bushes or trees having thin stems or trunks. In USDA zones 4 to 9, the deciduous flowering trees and shrubs thrive in full sun to partial shade. In the genus Amelanchier and rose family Rosaceae, there are 20 deciduous tree and shrub species. Serviceberries are a native of North America that can be found growing across the United States and Canada. 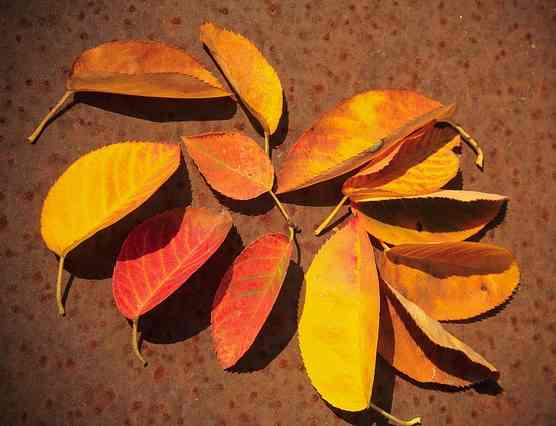 Serviceberry leaves have finely serrated borders, a pointed tip, and a rounded base. They are long ovate or lanceolate shaped in the autumn. The leaves are 3 to 6 inches (7.5 to 15 cm) long and 1 to 3 inches (1.5 to 3.5 cm) broad, depending on the variety. 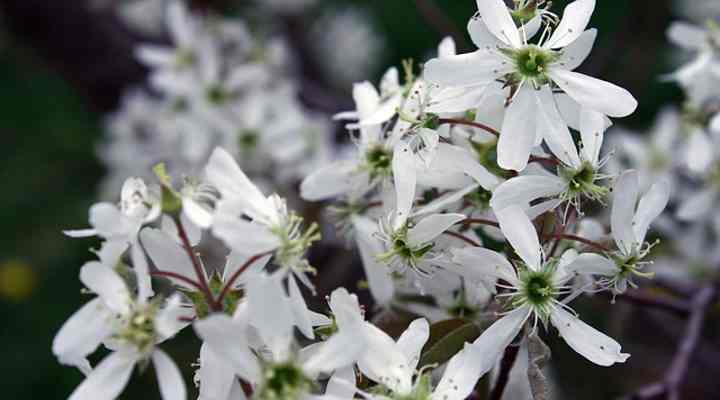 The flower clusters are 3 to 6 inches (7.5 to 15 cm) in diameter. White is the most common color for serviceberry flowers. Several plant species, on the other hand, produce pink, yellow, or crimson blooms. There are four to twenty blooms in each cluster.

Around mid-April, serviceberry trees start to bloom, which is one of the first flowers to appear. The tree is swarming with clusters of flowers when serviceberries bloom. In garden landscapes, the white blooms contrast vividly with the dark gray bark. For ten days, serviceberry flowers are in bloom. The early blooming time of Amelanchier trees and shrubs is referred to by the common names. Shad (schooling fish) swim up rivers to spawn around the time when serviceberries bloom in early April, for example.

When the ground starts to warm up after winter, amelanchier tree blossoms bloom. Serviceberries get their name from the fact that people could dig up the earth in early spring to conduct burial services after long, cold winters. 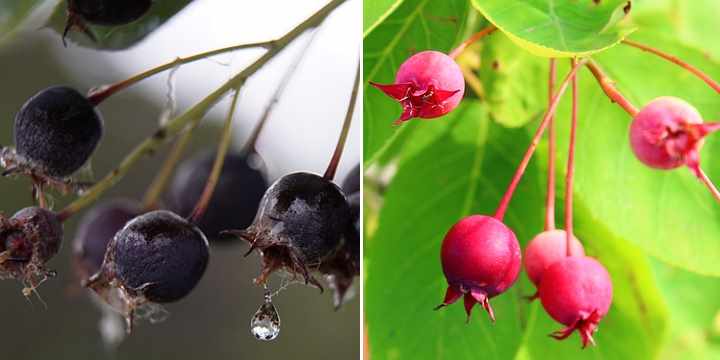 Let’s look at some of the distinguishing characteristics of popular serviceberry tree types in more depth. 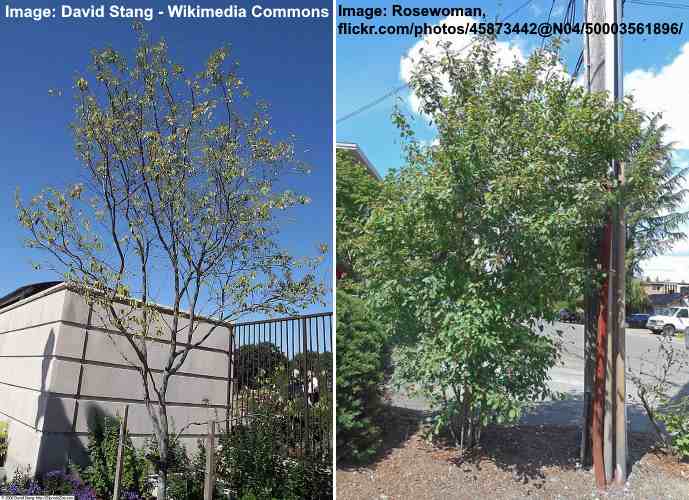 Suckers can be removed to avoid a shrubby development on the ‘Autumn Brilliance’ serviceberry tree (Amelanchier × grandiflora), which blooms in April with clusters of white starry flowers. The brilliant orange and red fall colors of this deciduous tree are a spectacular feature. The sweet little apple-like fruits (juneberries) begin to develop in the spring, turning purple in June.

Between 20 and 25 feet (6 and 7.5 meters) tall, with 15 to 20 feet (4.5 to 6 meters) of spread, the autumn brilliance serviceberry In USDA zones 3 to 8, serviceberry tree ‘Autumn Brilliance’ thrives in full sun to partial shade and performs best. The sucker-sending tree has multiple stems. As a result, it is necessary to remove suckers from the apple serviceberry shrub to encourage it to grow into a tree. 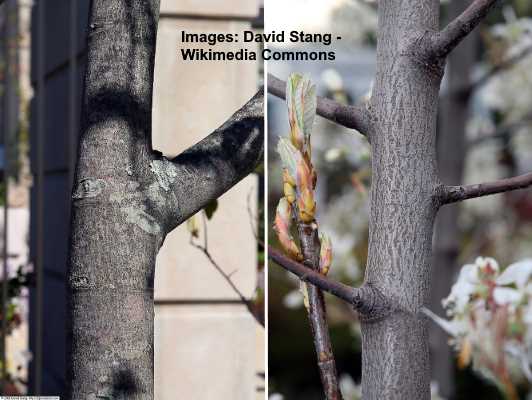 Give your tree at least six hours of sunlight per day to keep it healthy. In well-drained, loamy soil, grow serviceberry trees. The apple serviceberry tree is a drought-tolerant tree that requires little care once it has established. If you don’t want it to develop into a shrub, simply remove the suckers. The autumn brilliance serviceberry tree may be used as a foundation planting, specimen tree, shade tree, or tall flourished border shrub with the right pruning. 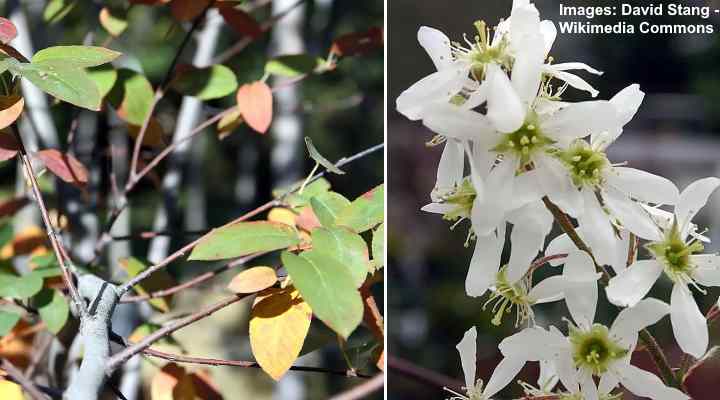 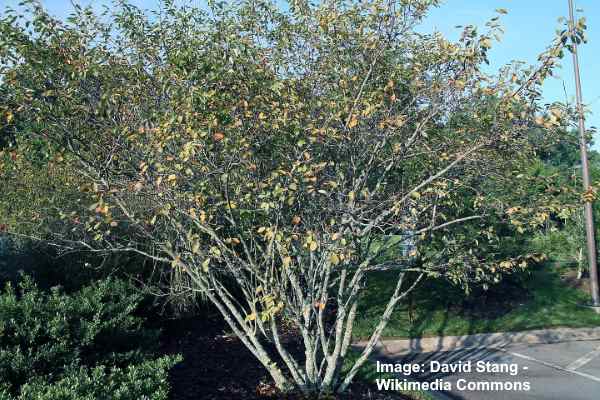 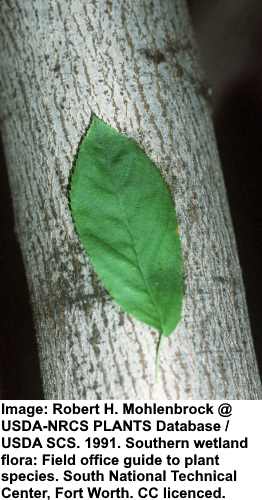 Smooth, gray bark with white streaks running longways covers the Allegheny serviceberry tree. The gray bark gets darker and rougher with fissuring as the serviceberry grows older. The stems are brown or copper, and the leaves are ovate and lovely. When ripe, the purple fruit looks like berries. 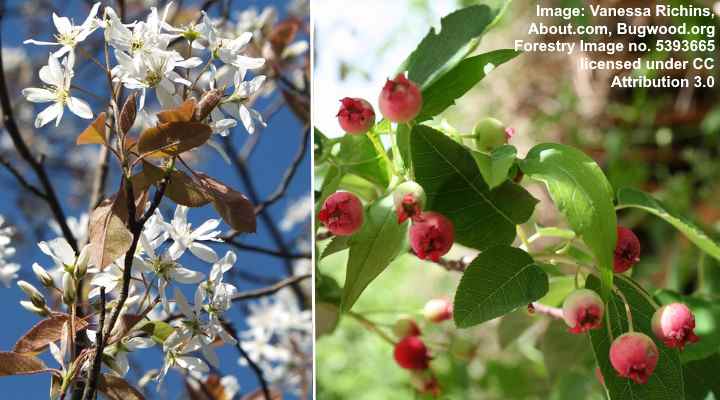 Serviceberry flowers: Flowers with five petals that are white and showy. 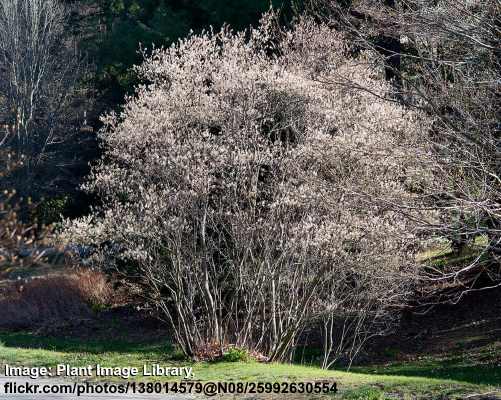 When it blooms in March, the shadblow serviceberry (Amelanchier canadensis) provides clusters of pinkish-white flowers. The shadblow produces dark green, finely-toothed oblong leaves, gorgeous flowers, and edible purple berries, as do other serviceberry species. As it grows, the serviceberry tree develops furrows in its smooth bark. 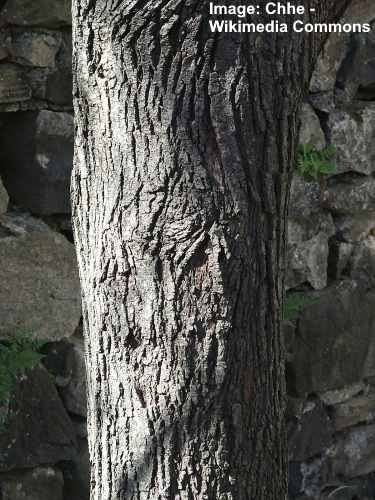 Remove the suckers from the shrub-like serviceberry plant in the winter to create a specimen tree. In early spring, the gorgeous tree develops a dome-shaped crown that is full of delicate fragrance blossoms. 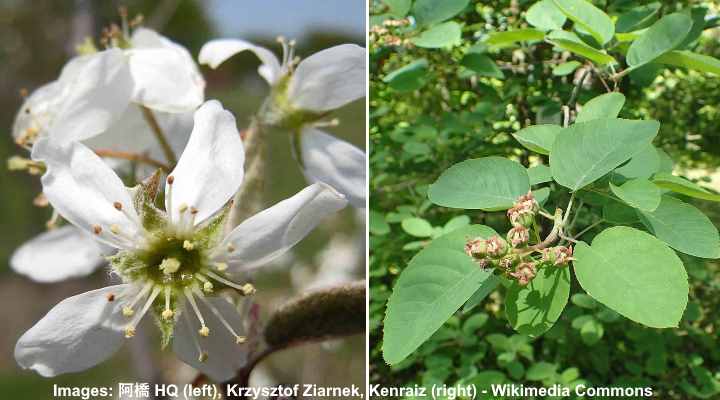 Serviceberry flowers: In early spring, fragrant serviceberry white flowers emerge from pink buds. The star shape is created by the five petals fanning out from the center. In March and April, clusters of white serviceberry blossoms appear. 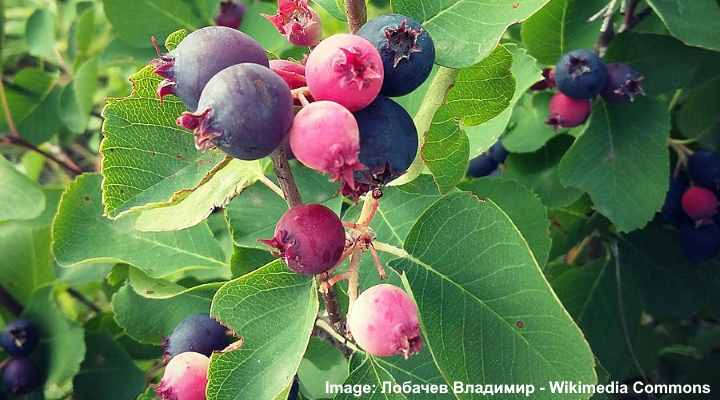 Serviceberry fruit: The edible fruits of shadblow serviceberry develop green and then turn crimson before reaching purple-black color. In May and June, the luscious fruit-like pomes are ready to be picked.

Sun exposure: There is a lot of afternoon shade, especially in the summer. 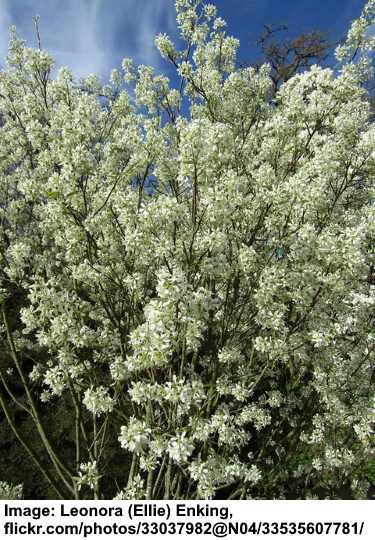 USDA zones 4 to 7 are ideal for growing the ‘Rainbow Pillar’ serviceberry. It’s a versatile tree that thrives in damp and dry soils and adapts to most soils. Before the dark green leaves emerge, the white clusters of blooms bloom in March or April. The serviceberry’s leaves turn bright orange and crimson in the autumn. In early summer, the decorative tree is adorned with dark, purple fruit. 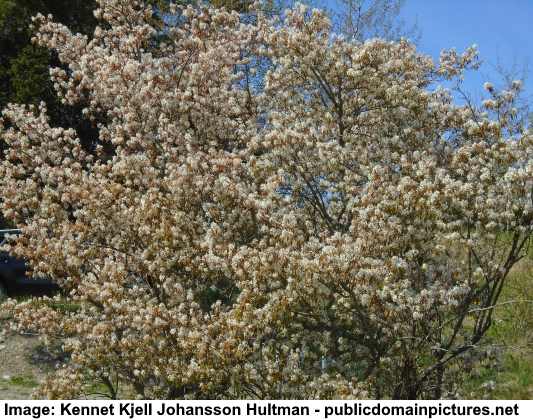 The tree Juneberry (Amelanchier lamarckii) is also known as snowy mespilus and has a spreading, vase-shaped crown. It is a tiny tree with a spreading crown. In early spring, small clusters of white five-petaled blooms appear alongside the leaves. In the autumn, the dark-green serrated ovate leaves take on varying hues of orange and crimson. he purple berries turn edible. USDA zones 4 to 8, Juneberry trees reach a height of 15 to 25 feet (4.5 to 7.5 meters) and a width of 4.5 to 7.5 meters. 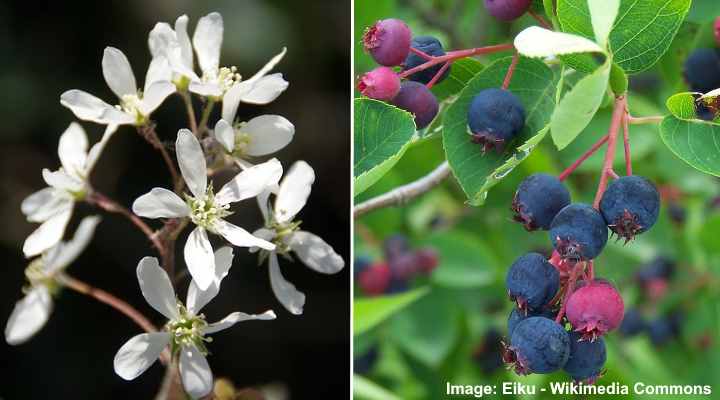 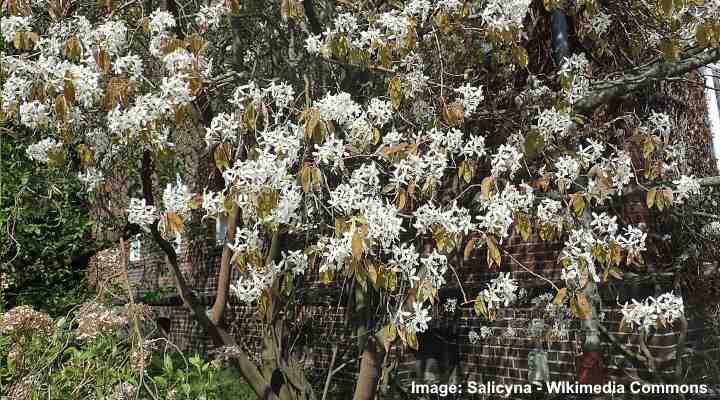 In the spring, beautiful white blooms appear on downy serviceberry trees, which are followed by dark-green leaves. The shrub’s summer appeal is enhanced by clusters of edible purple-black berries. The serviceberry leaves turn vibrant yellows, oranges, and reds in the autumn. The decorative value of the tree is best seen in the winter, when it has long deeper stripes. 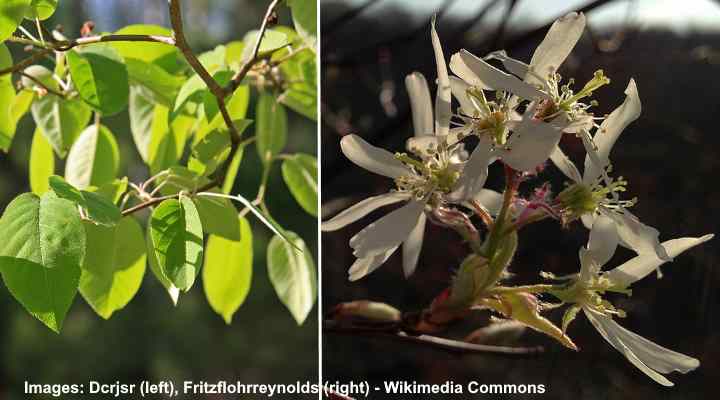 Serviceberry leaves: The leaves are obovate with fine serration along the margins and are egg-shaped. The new leaves are covered in woolly hairs, which acquire a glossy sheen as they age. The rich green leaves turn yellow, orange, and red in the autumn.

Serviceberry flowers: On serviceberry bushes, white flower clusters emerge early in the season. The star-shaped five-petaled blooms hang in 4-inch (12 cm) long clusters and have a mild fragrance. They measure about an inch (2.5 cm).

Serviceberry fruit: In June, small clusters of berry-like pomes are available to eat. When mature, the fruits turn dark purple. 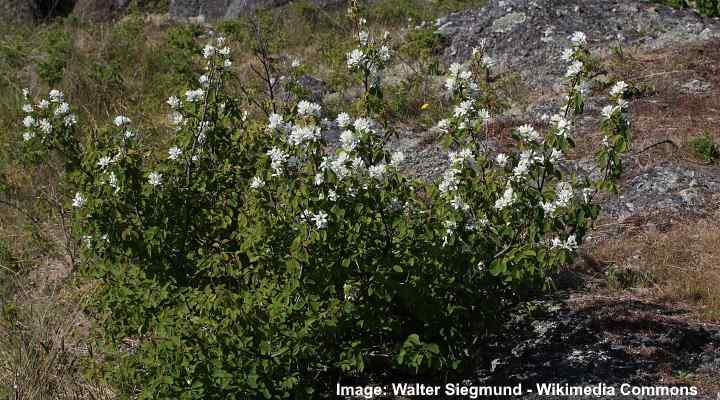 The plant grows well in wet soil and is tolerant of drought. The best and most delicious berries are produced when grown in full sun, as are stunning orange or red fall foliage hues. pigeon berry, western serviceberry, and western shadbush are some of the other names for Saskatoon serviceberries.

Serviceberry flowers: The clusters of blooms have star-shaped white flowers with five petals, as do other serviceberry blooms.

Serviceberry fruit: In the summer, clusters of sweet purple or blue berries attract birds. Pomes are great for jellies and jams because they are so tasty. 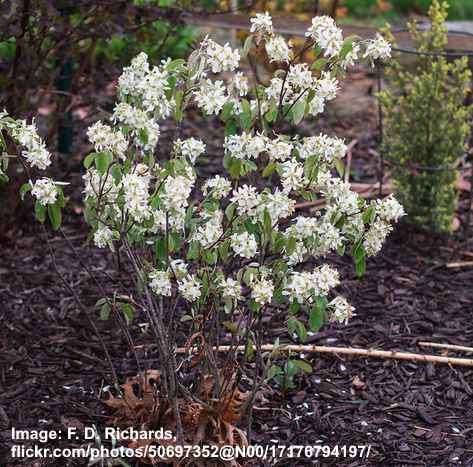 The saskatoon serviceberry cultivar known as the Regent serviceberry is a tiny cultivar. At 3 to 6 feet (1.8 to 2.0 meters) tall and broad, this blooming shrub develops. In the autumn, the blue-green ovate leaves become golden yellow and crimson. Its appealing light gray bark and charcoal-gray shallow furrows are also contributing to its four-season appeal.

Saskatoon cultivar of the Standing Ovation serviceberry shrub. The 15-foot-tall (4.5 m) upright white bloomer grows 4 feet (1.2 m) broad and becomes a narrow shrub. The decorative fruit, which appear as green berries that turn red and ripen to purple berries, is the primary ornamental value of this shrub.

The Standing Ovation serviceberry is a hedge, screening, accent plant, or corner of the home shrub that may be used in garden landscapes. 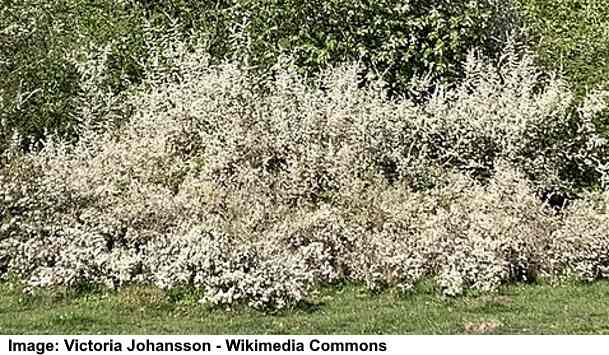 The dwarf serviceberry shrub (Amelanchier spicata) is a low-growing deciduous flowering plant that grows 3 to 5 feet (1.5 to 1.5 meters) tall and broad. The earliest to bloom in the spring gardens are white showy flowers that grow in clusters. In the fall, its leaves turn golden yellow or orange and are elliptical. 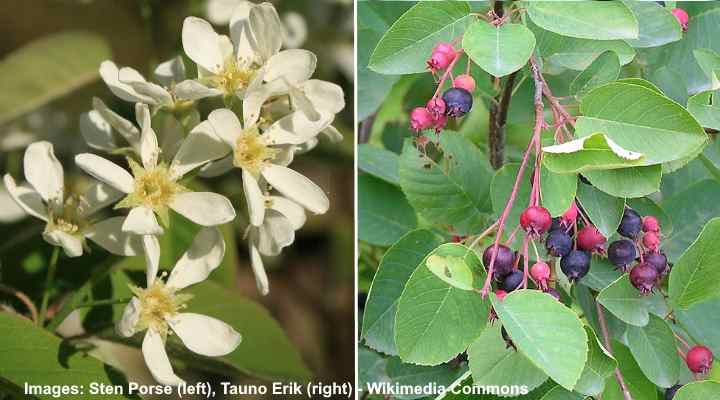 USDA zones 4 to 8 and full sun to partial shade are ideal for dwarf serviceberry blossoms, leaves, and fruit. The multi-stemmed plant has four-season decorative value and may be used as a hedge or screen. 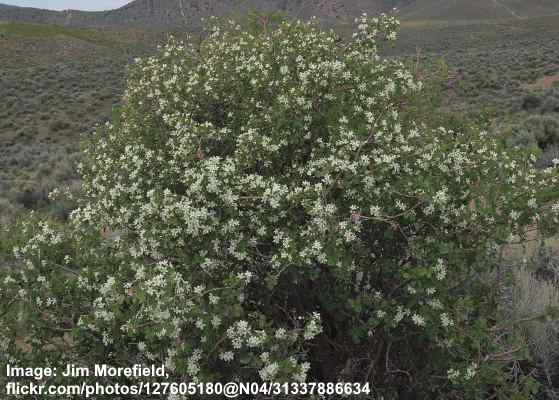 The Utah serviceberry (Amelanchier utahensis) is a huge shrub with all the characteristics of serviceberry plants. The spreading shrub has a rounded shape and grows up to 16 feet (5 meters) tall. Red berries turn dark purple when clusters of tiny white blooms bloom in mid-April. 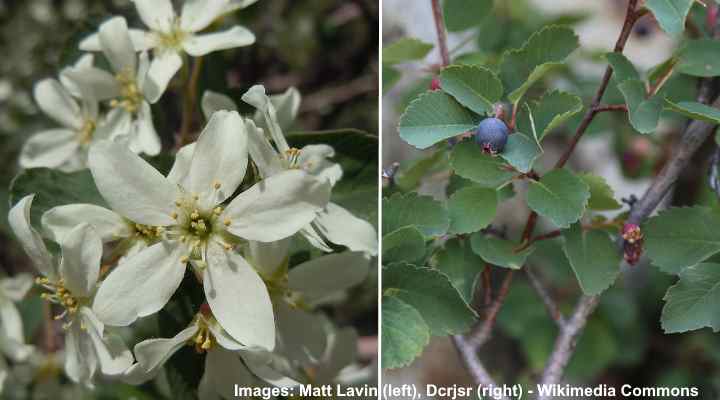 The flowers, leaves, and fruit of the Utah serviceberry