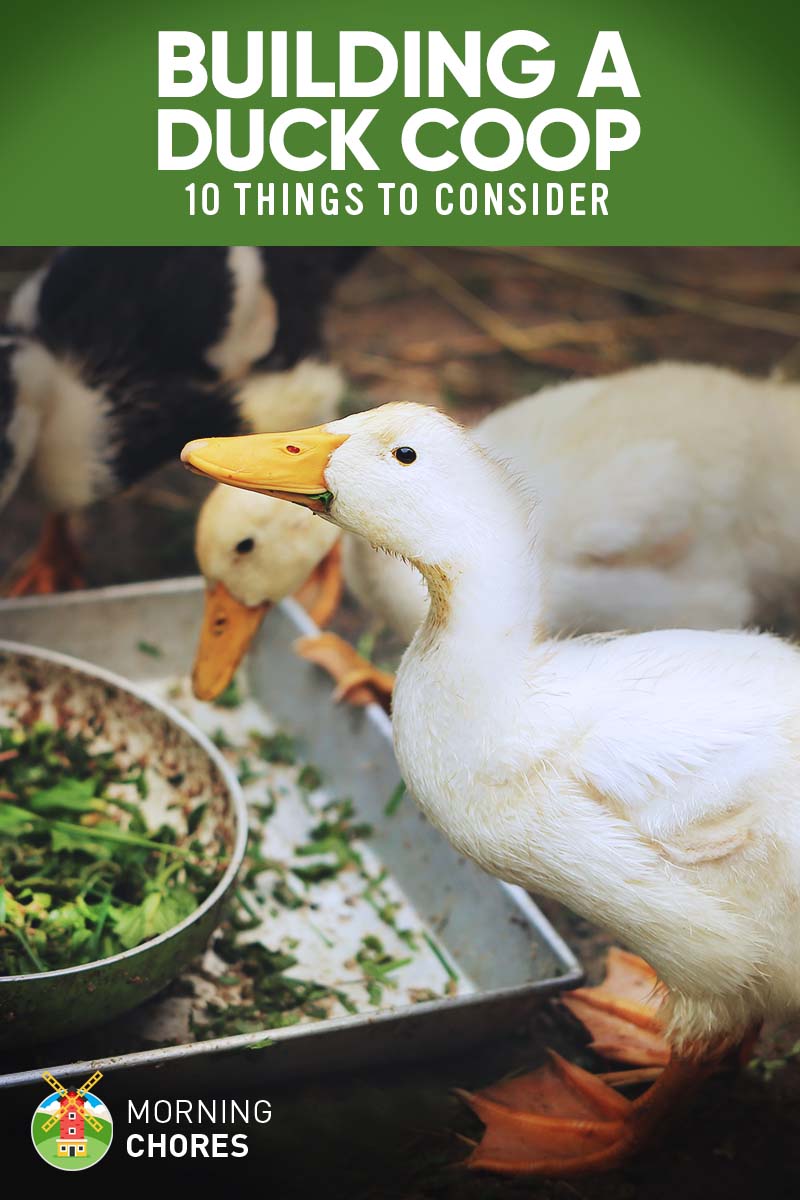 We may earn a commission if you purchase something through one of our links. Commissions have no bearing on our editorial content. Read the full disclosure before you make any decisions.

I decided to bring home my first set of ducks a few years ago, in the middle of winter. I had no idea what ducks were, and I’m not exaggerating. I asked my buddy to go to the local auction and get me a pair of Pekins.

I discovered that I had their coop backwards once they arrived!

Thankfully, they are tough little creatures because they had to go through the same educational process as I did.

I don’t want any other owner (or ducks for that matter) to have to go through the same trial and error process that I did. As a result, I’d like to begin by discussing their coop.

When we built our duck coop, I got one thing right. We knew we needed a lot of ventilation because chickens told us so.

Make sure your coop has enough air to breathe. When ducks exhale, they release moisture. As a result, because the bedding is so moist, their breath may cause mold. During the colder winter months, it may even induce frostbite in their legs.

Make certain that the top of the coop, as well as anyplace along the side that you think is required, has adequate ventilation.

2. Make It Easier to Keep Clean

To make keeping it clean easier, there are a few tasks you can perform.

You may begin by building the coop so that you may walk inside. The ducks’ food and other belongings can be stored right inside the coop thanks to a walk-in coop, which allows for shelving. However, if you don’t want to, you may construct the coop so that it is simple to access.

The floor may also be slid away from where it is placed. At the very least, paint the inside with exterior paint. Pulling out the water hose and spraying it down will be simple with all of these things working together.

The ducks’ coop entry and exit are very essential. Ducks are delightful little birds, but they can be pushy, and when it comes to entering their coop, there is no systematic way to have them in a row.

So, make sure to design their entrances and exits in that way. It should be big enough for two ducks to pass through at once. If that is the case, your ducks may be lodged in the entrance of their coop, and you will need to come out and look for them.

We were lucky enough not to have to deal with this problem. Pulling two ducks out of a stuck doorway, on the other hand, seems impossible to me. Just thinking about it makes me hurt. 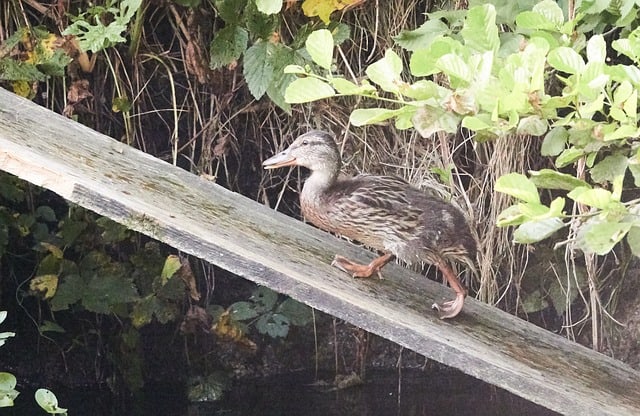 A duck coop might be built in a variety of ways, from simple to ornate. PVC pipe, chicken wire, leftover greenhouse plastic, and a really cool sliding door were used to create our first duck coop.

Our next (and current) duck coop was constructed out of pallets as well. One day, I wish they will be able to move on to a lovely duck pond. I used to have a dream until then.

The structure, on the other hand, has several noteworthy features.

It should be at or near ground level first. With my first coop, I royally screwed up. I was on the verge of putting it on stilts because I was so concerned about predators.

Second, you’ll need a ramp for them to walk into it if you can’t put it down on the ground. Make sure the ducks don’t have to climb a steep hill to get in their coop, however, make it high enough off the ground. Our ducks wouldn’t use the coop since they couldn’t climb that high, so we did this.

Lastly, ensure that the coop is spacious enough to allow for at least 4 square feet of duck floor area.

They are enjoyable without the need of a body of water. As an illustration, you can simply offer them a kiddie pool.

We dug a trench in the ground and placed a strong tarp over it. As a result, we filled the mini-inground swimming pool with water, so they had to get one.

They really loved it.

They also need a lot of water to drink. Since they need to drink in order to eat their meals, this is a crucial point.

Water spilling will be the next difficulty in your coop. Ducks are extremely messy and will muck up their food quickly, so keep their food at least two yards away from their drinking water.

You might want to come up with a water disposal strategy. Since I like this one, it’s simple to use the water for plant watering and fertilizing. Ducks’ water quickly becomes contaminated. They’ll drink and poop in it, as well as play in it.

You might even design your whole homestead around using the pond water for fertilization, plant watering, and perhaps even as a source of water in the event of a fire breaking out. For further on that, read our fascinating article on water hydrology. 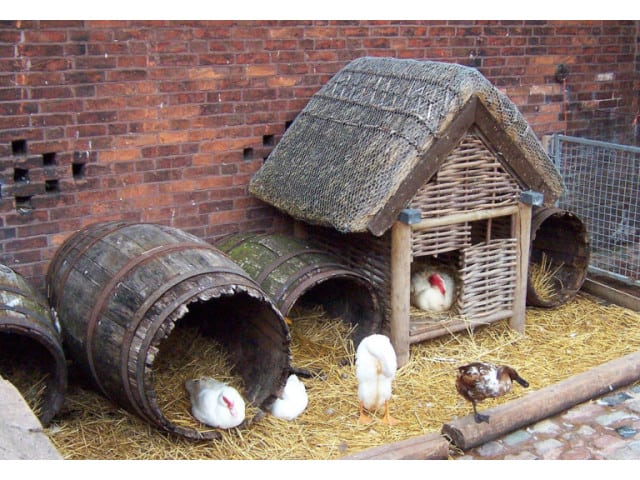 Ducks are not fussy animals. They’re content with their meals, a bowl of water, and a coop that has enough ventilation. Honestly, the more shabby the coop appears to be, the happier they seem.

But still, bedding is important.

Shavings or straw is an option for you. Since they’re soft and help retain some of the moisture, shavings are fine. Since it doesn’t get as wet as quickly and maintains its form better, straw is a fantastic option.

It’s worth noting that leaving wet or soiled bedding in the coop is never acceptable. Mold and fungus may also start growing in this environment. As I already said, this can have a negative impact on the ducks’ respiratory systems.

As a result, if you’re looking for the coziest beds for your ducks, these are two options to consider.

For a variety of reasons, you should really consider where you’ll place your ducks’ coop.

Predators will find it more difficult to check on you since it is easier for you to do so. Because, if you look outside for just a second, you can get going immediately.

Second, you must determine which direction your strongest winds are blowing from. In this manner, you can construct the coop in the most secure location.

Lastly, try to put your coop in an area where gravity will be on your side. Your ducks’ coop will supply you with a lot of wet bedding and fertilizer. Imagine how much simpler it would be for you to simply open the coop and pour everything onto your compost pile instead of having to spray it.

So, in order to make life a bit simpler for you, just place your coop in an appropriate location.

Ducks hate mess and clutter. If they step on glass, a nail, or other sharp debris, their feet may be seriously injured. In addition, anything can be eaten by a duck. You don’t want them swallowing the wrong thing, so you make sure they don’t.

Make sure to properly clean the place where they roam.

My goats, for example, wear bells around their necks. One of their bells went missing one day. My ducks were attempting their hardest to bite something, so I went to check it out, which is when I discovered it.

They were, of course, attempting to devour the lost bell.

It thankfully turned out to be much too large. However, I might have lost a duck if it had been something smaller, such as a piece of glass or a screw.

So keep that in mind when cleaning out the area for their future home. 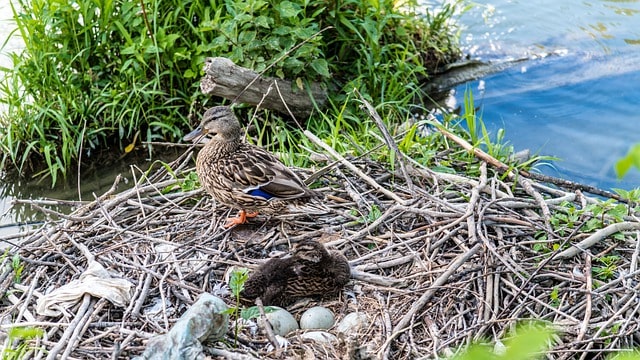 Ducks and chickens are not the same species. I voiced my opinion there. They seem to get along swimmingly. You’d be incorrect if you thought they looked the same in terms of thinking.

Chickens adore their nesting boxes, as you may know. They’re arguing who gets the better one. Even though they have plenty of roosting space, I sleep in them.

They will rarely use them.

Some of them will prefer to build beautiful nests out of whatever they can get their hands on. They’re really lovely!

So make sure your ducks’ nesting box is on the ground and measures around 14 square inches before you give it to them. However, if you prefer them to make their own nests from straw and other materials, that is also permissible.

Unfortunately, your ducks and the three small pigs share the same problem. Predators are both present in these environments.

A raccoon is most likely a duck’s greatest threat. They’re quite clever little animals.

First, build a firm foundation beneath your ducks’ coop. To keep animals from emerging from under the coop, it should be made of wood, cement, or vinyl.

Second, for ventilation, your ducks’ coop should have windows. It’s advised, though, to cover these windows with hardware cloth.

Lastly, utilize multi-step latches. Raccoons are thought to have the same degree of intelligence as a two-year-old child. If so, a raccoon should be able to open a lock as well.

Therefore, make sure that the hooks on the latches you use have to fit into the hole. Figuring that out is tough for them. Instead, you may use multiple latches on your coop. Anything that will make the predator’s life as difficult as possible.

Guys, that’s it for me today. When constructing or acquiring a duck coop for your lovely web-footed pals, I hope this has helped you all understand what duck coop issues are important.

Guys, that’s me for the day today. When constructing or purchasing a duck coop for your beloved web-foot friends, I hope this article has assisted you all in understanding what Duck Coop Considerations are important.