Hawks are strong predators that can kill prey. They are masters of the sky thanks to their acute hearing, sight, razor-sharp beak and talons. Hawk hunting skill has been used by humans throughout history, with training and falconry. There are around 16 different types of hawks in the United States. Yet, in this article, we’ll discuss the eight types of hawks found in Massachusetts. During the spring-summer breeding season, broad-winged hawks migrate north into Massachusetts. Brown on the head and chest, barred underparts, and black and white stripes on the tail distinguish these smaller hawks. Their small tail and huge wings with sharp tips are visible in flight.

Your best bet for seeing the broad-winged hawk is during their fall migration back to South America, when they are hopefully in the area. Flocks of birds called “kettles” fly in the sky, each containing hundreds of birds. You may see them in the woods if you are not on their migration route. Their piercing whistles can be heard all over the place. Cooper’s hawks may be found on year-round bases in Massachusetts, and they may be found across much of North America. Adults have a blue-gray back, orange chest patterns, a crimson eye, and a squarish head with a black hat. Immature birds have white underparts with heavy brown streaks and a yellow eye, brown back, and head.

They seem to be rather at home in the suburbs, as well as woodlands and forests. Little birds are their primary food source, and they pursue them with expert precision in the tree canopy. Cooper’s hawks are commonly seen in people’s yards, where they may attack birds at a feeder, particularly starlings, doves, and pigeons.

Cooper’s hawk skeletons show that many of them had broken bones in their chest from colliding through trees and foliage on a high-speed chase after birds, according to studies. Goshawks have a thick stripe over each eye and a gray back with gray barring on the chest that extends all the way down the belly. The sharp-shinned and cooper’s hawk are thought to be their bigger, fiercer cousins. Goshawks, on the other hand, are quite secretive and prefer to stay in the forest, avoiding human inhabited regions.

Except along the coast, where they may only be seen during non-breeding season, northern goshawks can be found in Massachusetts year-round. Nonetheless, since they favor to nest in old-growth woodland with deep canopy, you may find one difficult. When people get too close to their nests, they have been known to attack them. During the breeding season, be cautious when looking for these raptors.

Little hawks, birds, mammals, reptiles, and even insects and carrion are among the foods of the northern goshawk. Their population is difficult to assess because of their elusive nature, and they are considered uncommon. The face of the northern harrier is nearly owl-like. This disc-shaped face, which resembles that of an owl, directs sound into the ears of these animals to aid them track by sound and sight. The long tail and white patch above the tail are two helpful identifying features. Their wings are held in the shape of a “V” and they have a distinct flying style. The word “majestic” is a good description for these birds.

During the breeding season, you may see this hawk in Massachusetts, as well as year-round. In marshes, fields, and other large open areas, you’re likely to see them.

This hawk creates a platform in dense vegetation, such as reeds, willows, sedges, and cattails, unlike many other hawks that nest in trees. Males may have two (sometimes more) partners at the same time, and the female and her offspring will be fed by them. 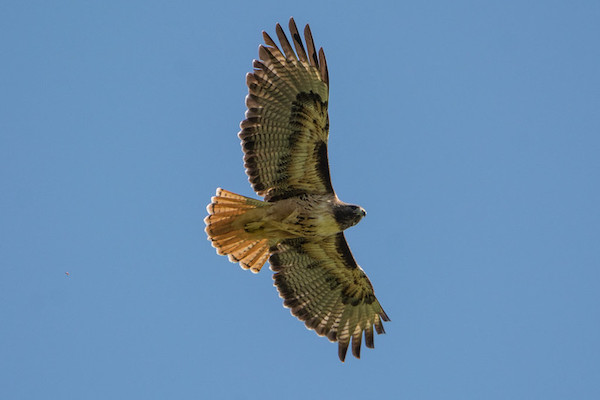 The most prevalent hawk in North America, red-tailed hawks may be found in practically every state and can be found all year. When birds that have spent the summer in Canada come down to join the others in the United States, their population grows even more during the winter.

Red-tailed hawks are often observed soaring aimlessly with their exceptional vision or perched along the roadway on power poles, and are most active during the day or early mornings. Small to medium-sized mammals like mice, rats, rabbits, and squirrels make up the majority of their diet. Birds and snakes are also on the menu for them.

The tail of an adult is brick-red, whereas a juvenile’s tail is brown and white striped. The difference between the two can be seen easily. These hawks have a light below and a dark brown above. Their breast is streaked with brown, and their belly region is streaked with deeper brown streaks. This can be another distinguishing feature. There are many color variations across the country due to the widespread distribution of these hawks.

The red-tailed hawk produces a long cry that has become synonymous with all raptors. Their scream is virtually usually heard as the sound for any hawk or eagle seen on film in films and television. In their range, which spans the eastern United States, red-shouldered hawks are common. California’s western beaches are also worth seeing. They are year-round residents of Massachusetts.

The thick red coloration down their breast, which extends all the way down their tummy with crimson bars, is a excellent identifying mark. Their back and wings are covered in dark, nearly black feathers. This will be blended with reddish feathers (thus their name) at the summit of their back and shoulders. There will be a lot of white barring mixed in with the dark feathers, culminating in a heavily barred tail from the mid-back down.

Before you see this hawk, you may hear it. They make a distinctive “kee-aah” sound that is usually repeated multiple times. It has been likened to a seagull by some people. When startled, they’ll bark to stake claim to a location.

These owls prefer flooded areas and wetlands, where they live and hunt in the forest. Suburban landscapes with woody vegetation intermingled with buildings are also common. They are sometimes mistaken with red-tailed hawks, however once you know the differences they aren’t difficult to tell apart. In Massachusetts throughout the autumn and winter, rough-legged hawks may be observed. They go all the way to the northern Arctic when it’s time to breed! They’ll breed on rocky outcroppings and cliffs there.

You may see them perched on poles and fence posts in the winter, when they are in open areas of the country. Mice, voles, and shrews are all hunted here. To get a hover-in-place view they may use to survey the earth below them, rough-legged hawks are known to rotate into the wind and flap their wings.

The feathers on the legs of rough-legged hawks give them their name. Feathers that extend all the way down the legs of few American raptors are rare. The majority have a thick black belly patch and are heavily mottled dark brown and white. When the wrist is against a light backdrop, you’ll notice a black patch in the air. A dark-morph that seems to be two-toned from below and looks nearly black. 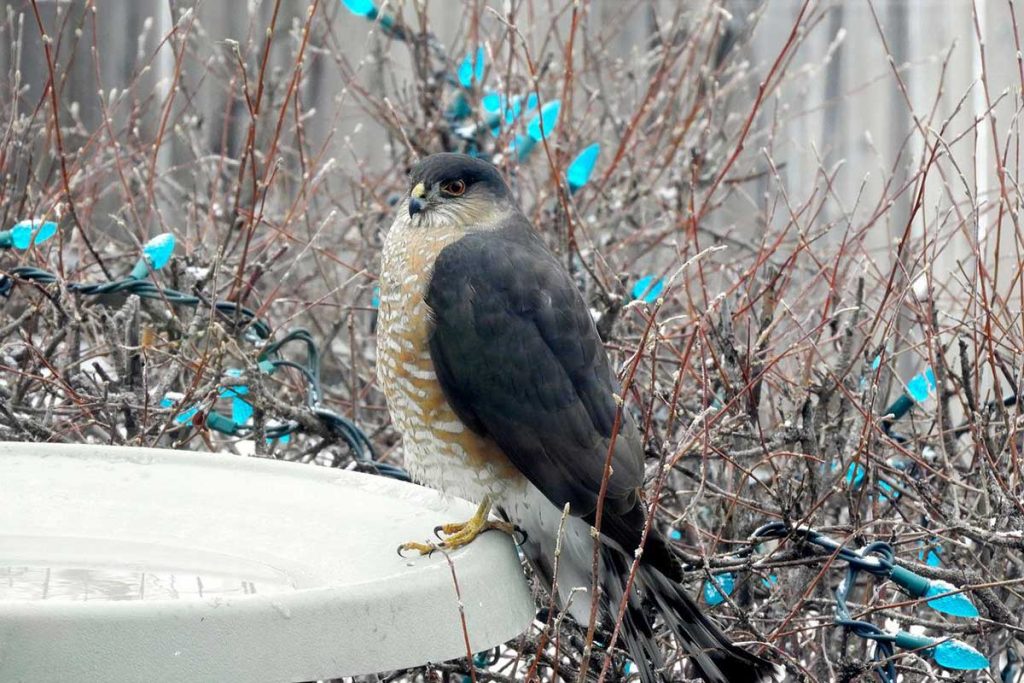 The smallest hawk in the United States, sharp-shinned hawks stay year-round in Massachusetts. Little birds and rodents are prey for these hawks, which pursue them through the woods.

They hide in forests with thick canopy during nesting, making them difficult to locate. They do return to the feeders in the backyards on occasion. During autumn migration, however, is the best time to see them. They head south towards the United States. They can be found in huge numbers at hawk watch sites from their summer range in Canada.

The backs of sharp-shinned hawks are blue-gray, and the cream coloured chests and black tails have reddish-orange markings. They have a more rounded head and squared-off tail, similar to the cooper’s hawk.