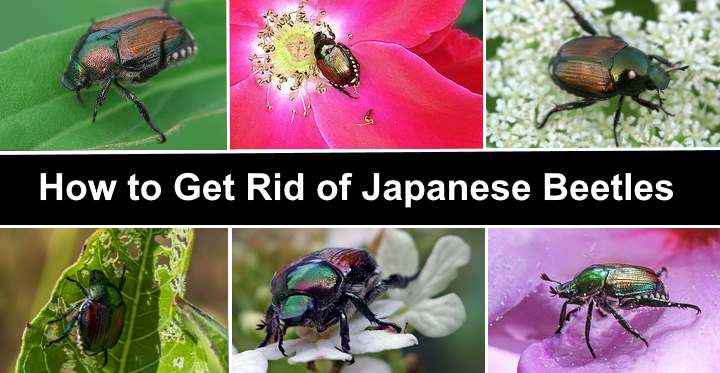 Little, destructive bugs that feed on plant foliage, ruining the leaves of many beautiful plants, trees, and shrubs, Japanese beetles (Popillia japonica) are a common sight. Green and gold iridescent coloring distinguish Japanese beetles from ordinary insects. White grubs live in the earth before emerging to wreak havoc on garden plants, and colorful, gleaming beetles start their life as white grubs. Using neem oil sprays for Japanese beetles is one of many ways to naturally eliminate the six-legged pests.

A multi-method approach is required to get rid of Japanese beetles. You can also cultivate plants that repel these colorful beetles, in addition to using sprays to kill them. It’s also important to avoid planting leaf-eating pest-attracting shrubs around the same time. After that, beneficial insects, row covers, and diatomaceous earth might help you get rid of Japanese beetles in your garden.

The greatest natural management techniques for Japanese beetles are covered in this article. To prevent Japanese beetle damage in your garden, you’ll also learn about the life cycles of these bright green and gold insects.

What Is a Japanese Beetle Grub?

The larval stage of the bothersome shiny beetles is known as a Japanese beetle grub. Grasses or the roots of decorative shrubs are eaten by fat, white worm-like grubs that live in the earth. The grubs take on a C-shaped form as they develop. Before pupating, Japanese beetle grubs spend their lives underground.

You can only detect the damage the grubs do because of their subterranean presence. Japanese beetle grubs frequently cause lawn damage. Brown or bare patches appear on lawns as a result of the larvae’s consumption of turfgrass roots. Preventing the beetles from laying eggs is usually the best way to get rid of lawn grubs. 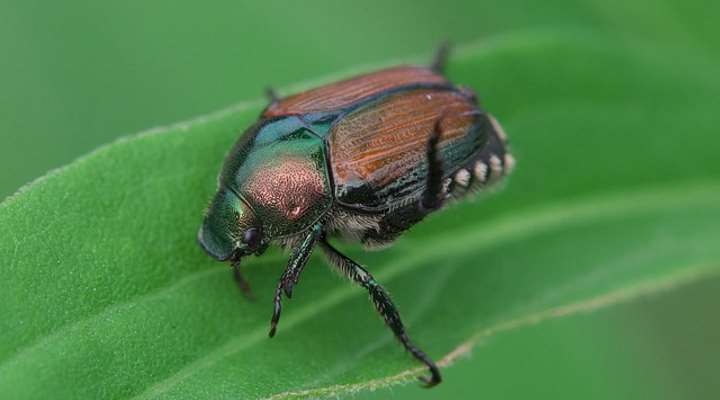 An egg becomes a white grub, then pupates and emerges as a bright adult beetle in the Japanese beetle life cycle. One year is spent in the beetle’s life cycle. When they come out of the ground in the spring, females lay eggs. During her lifetime, a female may lay up to 60 eggs.

In ten to fourteen days, Japanese beetle eggs hatch. The grubs live in the ground for ten months, feeding on roots and developing. The grubs then hibernate throughout the winter after three instars (stages). The beetle life cycle begins anew when they emerge in the spring.

During the evenings, adult Japanese beetles feed on shrubs and trees. During warm summer days, the colorful beetles are usually most active. However, in chilly mornings when they are less active and easier to kill, the best time to remove the destructive beetles from shrubs, bushes, and trees is.

How to Identify Japanese Beetle 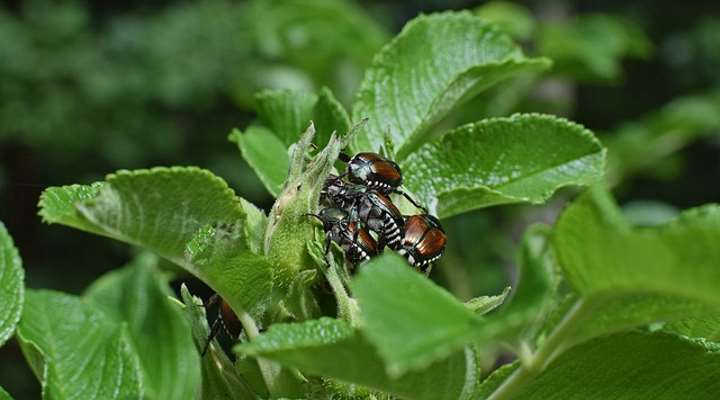 What Do Japanese Beetles Eat? 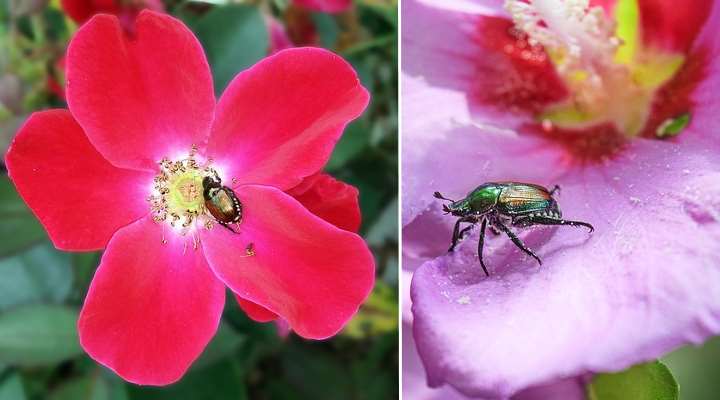 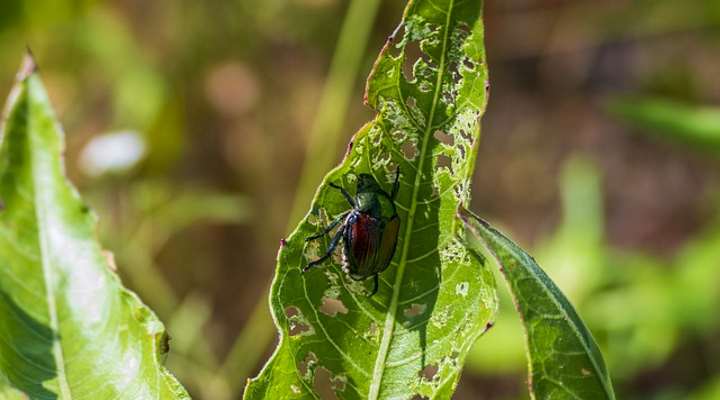 The most prevalent sight of Japanese beetle leaf damage is skeletonized leaves. Only the sections of the leaves between leaf veins are eaten by the glossy green and gold beetles. Beetles damage the leaves, which resemble lace in appearance. You should check all plants around you when identifying Japanese beetle damage.

Japanese beetles stay close to the plants on which they feed. As a result, the first step in removing plant-hungry beetles from other plants is to look for signs of damage such as skeletonized leaves. 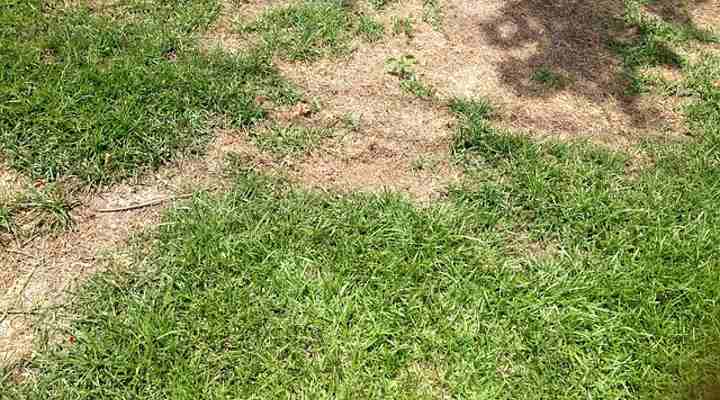 Where do Japanese Beetles Come From?

In June and July, when the plump white grubs pupate, Japanese beetles emerge from the ground. But, nearby gardens may also be home to Japanese beetles. Pheromones are released by the plant-destroying insects when they begin to feed, attracting more beetles. As a result, you might face an unmanageable beetle infestation in your garden unless you act quickly to eliminate Japanese beetles.

Popillia japonica is a beetle species that originated in Japan, as its common name suggests. They are thought to have first entered the United States in the 1900s, when trade with Japan grew. The iridescent beetles quickly became a big bother in gardens and agricultural fields since they are not native insects.

How to Get Rid of Japanese Beetles 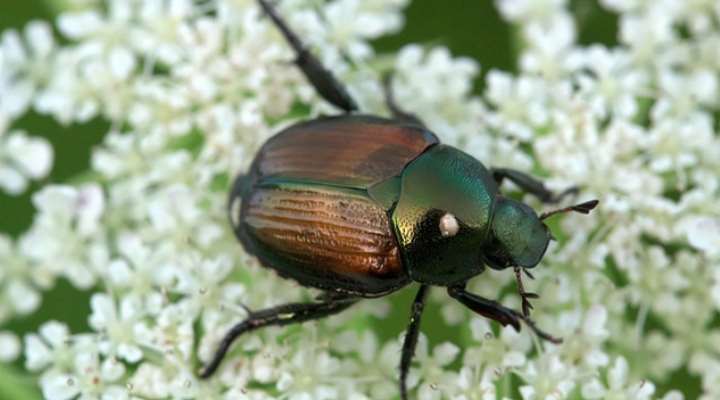 The destruction of the grubs, killing adult beetles, and preventing future infestations in your yard necessitates a multi-pronged strategy to get rid of Japanese beetles. Go ahead and learn about natural Japanese beetle control strategies by reading through to the end.

Hand Pick Japanese Beetles to Get Rid of Them

Physical removal of the shimmering insects is the first step in getting rid of Japanese beetles. Inspecting plant leaves for signs of beetle damage should begin in mid-summer. On chilly mornings, when the glossy insects are less active, is the best time to investigate. Shaking the host plant is the simplest method to pick and destroy beetles. Next, put all iridescent green beetles in a tub of soap water until you have gathered them all.

You should also look at the types of ornamental shrubs that Japanese beetles like to devour. Shiny green beetles, for example, can be found on rose flowers and under rose bush leaves. In addition, preventing the beetles from attracting additional insects will involve removing dazzling beetles from fruit trees, rhododendron bushes, pea plants, and fruit bushes.

Beetles are lured to yards with traps, which are hoped to get caught and damage plants less. The flying insects are attracted to the beetle traps by sweet-smelling odors. Several traps claim to eliminate hundreds of beetles every day. Unfortunately, trapping for Japanese beetles is not very effective, according to research.

Although traps are said to capture a large number of Japanese beetles, they typically attract more beetles than they catch. As a result, entomologists caution that beetle traps may do more harm than good. Furthermore, increasing trap effectiveness is hampered by their placement.

How to Kill Japanese Beetles

Beetles can be eradicated from plants and future damage prevented using natural Japanese beetle sprays, such as neem oil or insecticidal soap. Natural beetle killer powders such as diatomaceous earth can also be used. 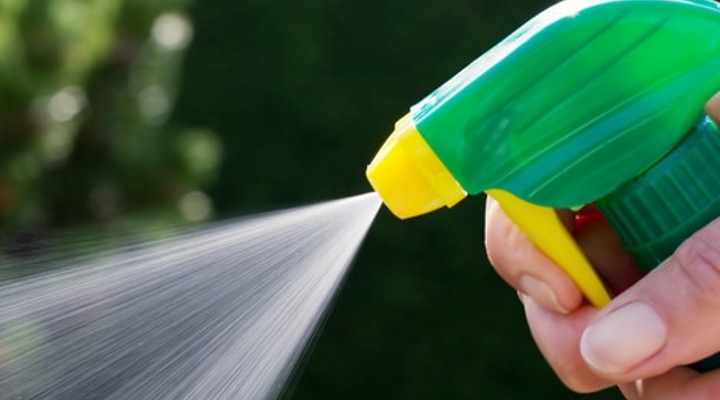 Treat your prized ornamental shrubs and flowers with a natural neem oil spray to kill Japanese beetles. Mix 2 tsp. of the beetle spray to make it. 1 tsp. of neem oil In a spray bottle, mix one quart (1 liter) of Castile soap with 1 quart (1 l) of water. Spray on plants after thoroughly shaking the bottle.

Spray neem oil on the foliage of plants that have been infested by Japanese beetles for optimal results. First, thoroughly spray the solution onto the leaves and flowers. For getting rid of Japanese beetles, applying the plants in the evening once a week and continuing after the beetles are active is critical.

Japanese beetle grubs that live in the ground or lawns may be prevented and killed with Neem oil, which is an natural remedy. For every gallon (3.7 l) of water, use two tablespoons of neem oil. Water your lawn with a hose sprayer or watering can. In late summer, apply every seven days to the ground to eliminate immature larvae.

By spraying insecticidal soap on plants, you may spray to get rid of Japanese beetles. Use an all-natural soap like Castile soap to make a homemade insecticide spray. Without harmful chemicals, this kills beetles by breaking down the outer layer of their skin with oils and fatty acids.

Mix five tablespoons of liquid Castile soap with a gallon (3.7 liter) of water to make your own Japanese beetle insecticidal soap spray. Next, to help thicken the solution, add two tablespoons of vegetable oil. To emulsify the spray liquid, mix thoroughly. Afterwards, to kill Japanese beetles, spray them with a pressurized garden spray. Until you no longer see Japanese beetles on plants or evidence of additional plant leaf damage, use the beetle spray every four to seven days. 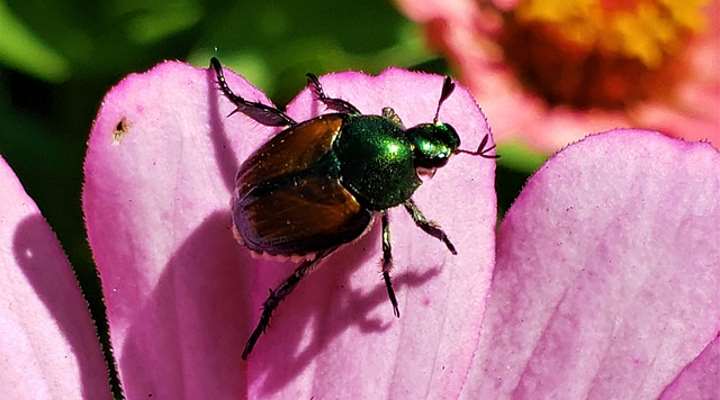 Only dry diatomaceous earth (DE) can kill Japanese beetles, and it is effective in doing so. Diatomaceous earth, also known as diatomite, kills beetles by destroying their exoskeletons. The white powder is only effective when sprinkled on dry ground or foliage. When beetles emerge from the ground in June, the best time to apply DE is. Moreover, since diatomaceous earth is ineffective when it’s wet, you’ll have to reapply the powder after rain or watering your garden.

How to Control Japanese Beetles

In order to prevent Japanese beetles from consuming your roses, legumes, ornamental bushes, or fruit trees, controlling them is also an important aspect of pest management.

Japanese beetles are kept at bay by the sheets, which protect your plants from harm. Before the beetles emerge from the ground, installing beetle-protective covers is best in late spring or early summer. Row covers will also keep pollinators from pollinating your crops, so it’s a good idea to remember that.

Onions, garlic, catnip, marigolds, larkspur, leeks, and white geranium are among the plants that deter Japanese beetles. These plants may be grown alongside your prized decorative bushes. The beetles may be repelled from attacking your gorgeous blooming bushes and plants.

Plants that are resistant to Japanese beetles include flowering plants and evergreen perennials. Lilac, begonias, magnolia, most conifers, hydrangea, and boxwood shrubs are some examples of plants that do not attract beetles. If you are fighting a Japanese beetle invasion, it is essential to remove plants from your garden like roses, fruited trees, hibiscus, legumes, and rhododendrons.

Essential oil sprays may be used to repel Japanese beetles. For every cup of water, mix 15 drops of wintergreen or peppermint essential oil. To deter Japanese beetles from damaging plant leaves and flowers, thoroughly mix and spray liberally on the plants. To keep beetles away from your plants, apply every other day for best results.

How to Prevent Japanese Beetles

Preventative measures to stop eggs from hatching or preventing beetles from laying eggs are also required when dealing with Japanese beetles for good.

Nematodes are soil-dwelling worms that infect beetle grubs and kill them. The healthy worms infect the plump white grubs in the same way that milky spore dust does. As a result, fewer beetle grubs hatch in mid-summer, if any do at all.

Introducing parasitic wasps to your garden may help you avoid Japanese beetles. In late summer or overwintering grubs in the fall or winter, two species of tiphiid wasps, Tiphia popilliavora and Tiphia vernalis, attack young grubs. In addition, adult Japanese beetles are killed by a tachinid fly called Istocheta aldrichi.