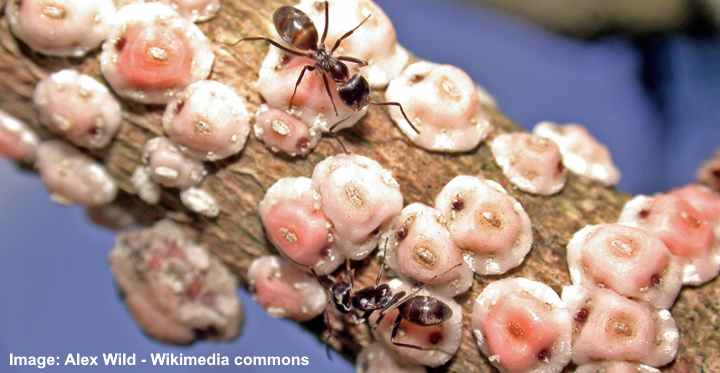 Scale insects, which appear as little bumps on plant stems and leaves, are destructive houseplant pests. Houseplants and outdoor plants can be damaged by scales. Scale insects feed on the sap of plants, causing discolored leaves, leaf drop, and stunted plant development.

Scales are crawling insect pests that hop from one plant to the next, infesting them. By piercing plant tissue and sucking sap, scale insects harm plants by their mouths. You will learn how to get rid of these plant-destroying bugs on houseplants and outdoor plants in this guide to scale insect control.

Several species of scale insects exist, each with a distinct color and size. They resemble spherical bumps on the plant and are commonly misidentified. Plant pests with a spherical or oval form may be tiny dots or gigantic lumps, and their size varies. Scales are difficult to distinguish when they reach maturity since they don’t move on plants.

Recognizing scale bugs as insects can be difficult when viewing photographs. They’ve got a beautiful oval shape and stick to plant stems and leaves. Little scale insects, less than 2 mm in diameter, or bigger scale insects up to 5 mm in diameter. Scale insects form a sort of lumpy plant growth when they clump together on stems.

The insects are constantly feeding on the plant’s sap, even though they don’t appear to be moving. On the spherical glossy bodies that the sap-sucking bugs use as protection, you may also see a sticky liquid.

Female scale bugs and male scale insects have radically different looks. Males have a beaked appearance and are smaller than females. You will rarely see these pests on plants because they only live for a few days. 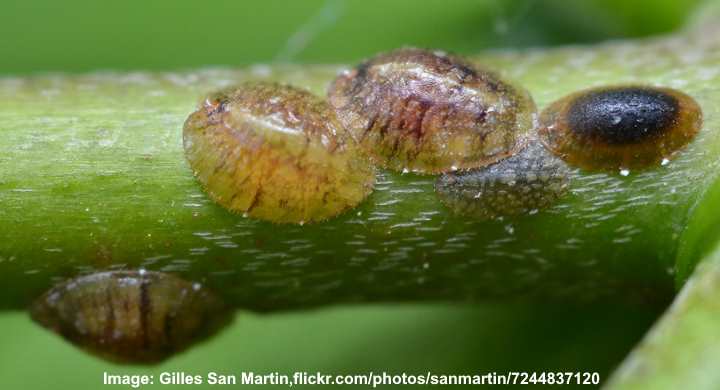 The life cycle of scales begins as an egg, goes through two instars, and finally maturation as adults. The eggs of a mature female scale develop into yellowish nymphs (first instar) that move about on the plant in search of a place to live and feed. The insects could stay in that location for the rest of their lives.

Scale bugs do the most damage during their adulthood stage. The female insects suck sap from the plant and stay in one spot. Brown or white scales develop on the insects during this period of protection. The females deposit eggs, which are incubated beneath their own hides.

The microscopic insects move to a new location on the plant once they hatch. Scale insects are difficult to identify due to the fact that they do not move during their life cycle.

Where do Scale Bugs Come From? 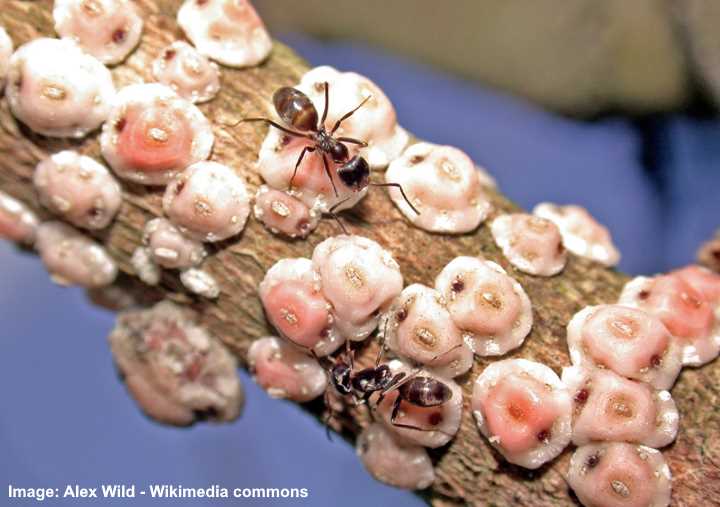 Scales on houseplants may come from both the outside and inside. Other ways to introduce scale insects into the home include using polluted soil, reusing an unsterilized pot, or leaving houseplants out in the summer. Incut garden flowers or fresh produce from the store may carry in a range of plant pests, including scales.

According to the University of California, scale bugs may enter your home via open windows on the wind and cause a problem.

How to Identify Scales on Houseplants 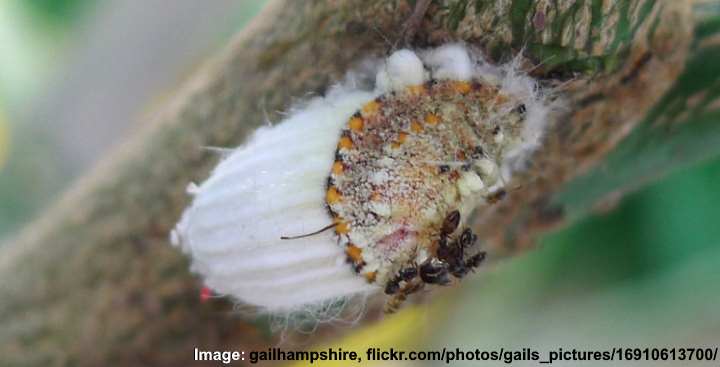 Scale insects on houseplants may be identified by looking for unusual bumpy growth on stems and the underside of leaves. Brown shell-like scales will be seen adhered to the plant if you have a scale infestation. If your plant has scales, there might be evidence of honeydew and sooty mold.

The damage caused by scale plant insects is a frequent way to identify them. On the plant, Scales secrete a sticky substance called honeydew. Black sooty mold grows as a result of the sweet gluey liquid. The stems and leaves of the plants may become sticky and begin to blacken, in addition to observing unusually tan-colored bumps.

Houseplants may be affected by three different types of scale: 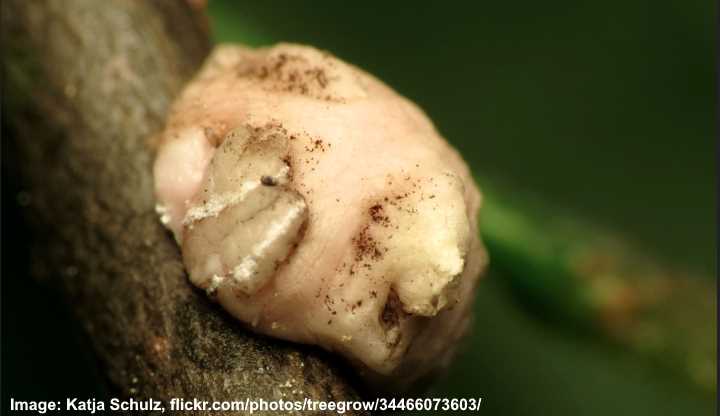 This photograph shows a kind of soft scale insect known as the pink wax scale.

Scale has the least noticeable negative impact on houseplants in terms of growth or vigor. Yellow leaves, brown leaves, leaf drop, and dead foliage or stems are some of the other signs of damage on scale-infested plants. Scales may eventually lead to plant mortality if left untreated. Scale insects may cause the following types of plant damage:

You must get rid of the plant bugs quickly, even though scale pests do not damage plants as rapidly as spider mites.

How to Get Rid of Scale Insects from Plants

Before eliminating scale bugs from houseplants, it’s important to keep the sick plants separate from healthy ones in order to avoid further spread. The tiny, freshly hatched nymphs of scale insects may infest other nearby plants, despite the fact that they don’t seem to move.

To get rid of scales, it’s advised to avoid synthetic pesticides as the pests develop resistance quickly. To get rid of scale insects, there are a variety of safe alternatives to harmful pesticides. How can you naturally eliminate scale on your plants? Read on to learn more about it. 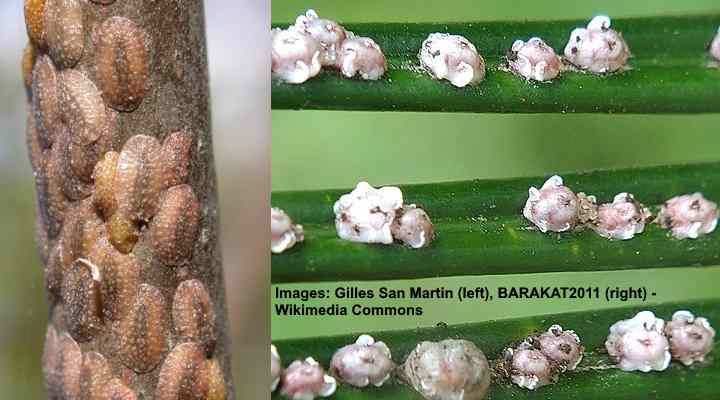 Isolation and removal of the affected sections are the first actions to take when discovering scale on plants. For heavily-infested plants, it’s preferable to trim the infected region down to remove any signs of scale bugs. Do not put contaminated plant parts in the compost, but in the trash.

Your struggle to eliminate all traces of scale insects includes not only pruning, but also other activities. You’ll have to use natural oil or soap sprays to debug the remainder of your plant since nymphs can be difficult to locate.

Use Rubbing Alcohol to Kill Scales on Plants

Use a cotton swab soaked in 70% isopropyl alcohol to remove scales from plants. Wash off the scale insects with water. Dip a cloth in rubbing alcohol and wipe the afflicted leaves or stems for a bigger infestation. The bug’s protective waxy layer is broken down by the alcohol solution, causing it to dehydrate and die.

Mix two teaspoons of organic neem oil and a teaspoon of Castile soap with a 1 quart (1 l) of warm water to use an effective scale insect spray on plants. To kill the scale bugs, fill a spray bottle with vinegar and shake vigorously. Spray all infected sections of your plant.

Until all evidence of scale or other houseplant pests has vanished for good, apply it frequently to your plant. Scaly houseplant pests can be gotten rid of using Neem oil, which is a natural insecticide. By disrupting the reproductive systems of common plant bugs, neem oil works to kill them. The natural homemade scale spray continues to work after applying neem oil because of its residual effect.

The fact that neem oil is a effective scale prevention strategy for your plants is one of the benefits. Neem oil, according to researchers from Colorado State University, is a scale insect control horticultural oil. Spraying a neem oil solution throughout the plant is required to be successful in eradicating scale bugs.

Scale insects and their nymphs will need a number of applications to be killed. Commercial oil sprays for scale bug removal are an option if you don’t want to create your own neem oil spray. To avoid harmful chemicals in your home, make sure the products are natural and come from organic sources.

Homemade Soap Sprays to Get Rid of Scale Insects on Plants 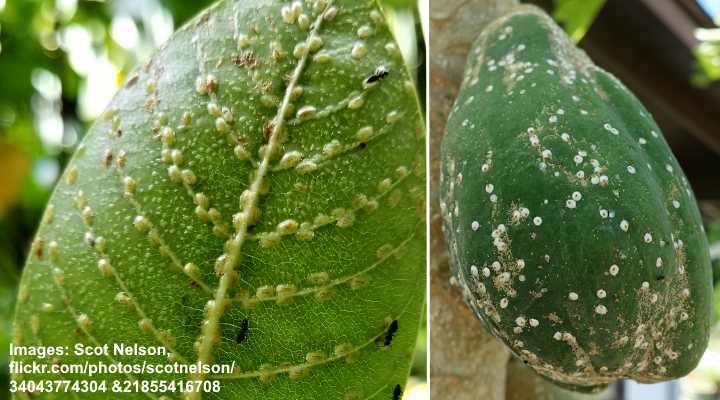 Scale bugs on plants, veggies, and fruit trees are killed by soap spray. Add 1-2 teaspoons of liquid dish soap or Castile soap to a quart (1 l) spray bottle filled with lukewarm water. Spray liberally on all infested plant parts to kill scale bugs, then shake well. Until your plant is pest-free, spray it as often as necessary.

To kill scale bugs on plants, you may also rub a liquid soap solution across them. To eliminate scales, dip a clean sponge in soap water and wipe the plant foliage and branches thoroughly.

The scales coating is broken down by the soapy liquid. To avoid the soap harming the plant, wash it with a wet cloth for about an hour or two. Honeydew and black sooty mold caused by scale bugs can also be removed using soap water.

Replace the Potting Soil to Get Rid of Scales for Good 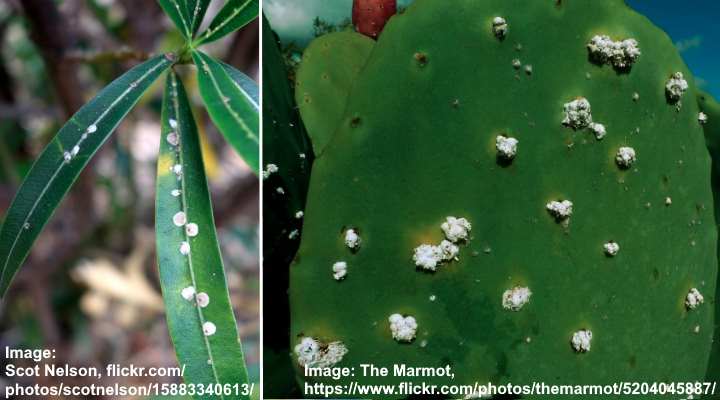 To ensure you eliminate scale insects from your plants and don’t reintroduce them, repotting is required. To prevent scales from returning, replace topsoil with a well-draining, sterile material. Make sure that all traces of scales on your infected plant are eliminated before repotting.

Next, carefully remove the root ball from the pot, then throw away all of the soil. To get rid of any contaminated soil, put the roots under running water. To sterilize a pot, thoroughly wash it in hot soapy water. Fill the pot with fresh soil and replace your plant.

It’s important to prevent scale insects from returning after eliminating them from houseplants. Before bringing home any new plants, check them for indications of an infestation. Scale bugs and other houseplant pests can infect your plants if you do not take this step.

Remember to isolate one plant from others if you find it has a scale problem. Scales can spread rapidly among plants if they are not isolated immediately. How can you protect your prized houseplants from becoming infested with scale insects?

Check plants regularly for scale insects and other pests

Look for signs of scales on the underside of leaves and stem joints during the growing season. Soak a cotton swab in 70% alcohol and use it to kill scale bugs right away if you notice any. This approach will help prevent an infestation from spreading out of hand. When inspecting plants for scale pests, what should you look for? Here are some scale indicators:

Scale bugs can be prevented from forming by spraying a natural neem oil spray on houseplants once every four weeks. Crawlers are most active in the spring and summer, when they emerge from eggs. The life cycle of scale is broken by applying neem oil to plant leaves.

Use beneficial insects to prevent scale insects on plants

Beneficial insects like ladybugs, beetles, and lacewings may help to lower scale populations by introducing them. These predatory insects may help to keep other pests off plants by eating scale eggs and larvae. The beneficial insects will stay around as long as there is something to feast on.